Southern Souls showcases intimate performances of up-and-coming indie musicians in southern Ontario. Videographer Mitch Fillion created the project five years ago when he saw an opportunity to better represent Ontario's local music scene. Inspired by La Blogotheque's Take Away Shows (Paris, France) and The Black Cab Sessions (London, England), he set out to capture the essence of live bands in the environments where they live and breathe.

This Saturday, April 19, the first-ever Southern Souls screening will be held at Oz Studios. Some of the best videos from Fillion's expansive archive will be shown, including a few unreleased ones (like a performance from members of The Band). Drinks will be served, musicians will be mingling, and the party won't stop til 2am.

Are you a Southern Souls junkie? Ever wonder what goes into making these high-def videos? Fillion filled us in on what goes on behind the scenes. 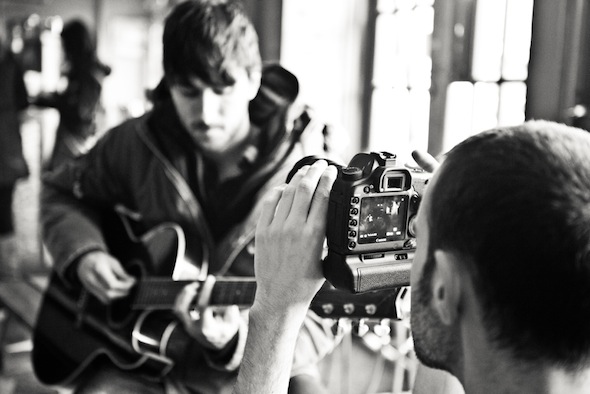 How have you seen Southern Souls change over the last five years?

It's funny, because there was a point a couple of years back when Thom Gill made a joke about how the site should just be called "Mitch's Cool Video Page" or something along those lines. (That) made me realize it was time to expand the project beyond the video content. I now have about seven writers on the team who do reviews, interviews, and articles, and we also have an awesome illustrator and three photographers who produce a lot of cool content for us. I think I've also gotten a little bit better at shooting and capturing audio over the last five years (I hope).

How do you select the bands you make videos for?

I get a ton of email submissions on a daily basis and probably end up working with about a third of them. I go with whatever interests me, really. Good lyrics are important, especially for this kind of performance, when there's not a lot to hide behind.

I arrive a bit before most of the band shows up so I can get my camera ready and film them coming in and setting up. I shoot them until they're all set up and then I quickly tape some lav mics under the singers' shirts and place some field recorders near instruments and around the room. We do a few takes of each song and the whole process takes maybe half an hour to an hour and a half, depending on how practiced the band is and how many takes they do. A lot of the time we only do one take of each song, especially with the bigger artists. It gets a bit stale when you start going over three takes per song, so I try not to encourage that.

What have been some of the worst mishaps during video shoots?

I think the one that takes the cake was when I was filming with Dinosaur Bones at Dream House Studios and the studio almost went up in flames. A cigarette butt must've sparked a fire on a bunch of cardboard boxes next to the building but luckily the fire department was there super quick and got things under control pretty fast. We were able to get back in about 20 minutes later and finish recording but it wasn't the most pleasant air to breathe inside.

Who have been some of your favourite bands to work with, and why?

It's been surreal to work with bands that I grew up listening to like Limblifter, David Bazan, and Joan of Arc, but in those situations it's usually a quick shoot and I don't really get a chance to hang and talk with the artist that much afterwards. I'm sure I wouldn't know how to act cool around them anyways, being way too starstruck. I've made friends with a lot of great artists in the city who I've worked with multiple times and it's been really nice building a unique relationship with them.

Do you have plans in the works for expanding Southern Souls?

As far as the video content goes we've been doing a lot more multi-camera concert recordings to switch things up a bit and I think we'll soon start to do some more video interviews with bands as well. Aside from Southern Souls, I am directing the Live At Massey Hall concert series that starts in May, which you can see a trailer for here. It's a huge opportunity for me and definitely the biggest project I've ever had the privilege of working on.