The AGO's First Thursday for April was a special one. First, it included a preview of the new Francis Bacon / Henry Moore exhibit, which officially opens on Saturday (check out some terrifying photos here). Second, the AGO paired two of Toronto's most compelling musicians, Petra Glynt and U.S. Girls, to tear apart the AGO's atrium. 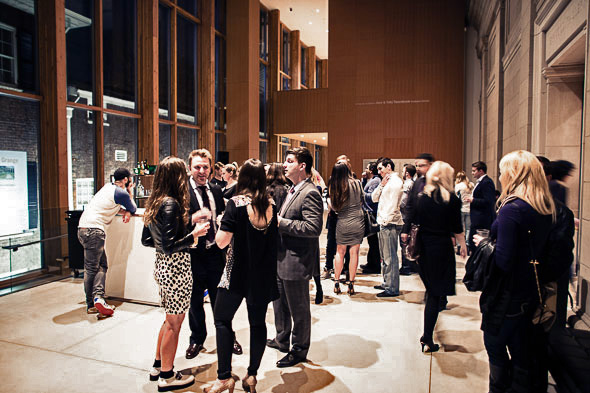 This was my first time making it to a First Thursday AGO event, and what struck me as soon as I walked in was that I was underdressed - wait, no, I was just not fancy enough, period. Turns out AGO First Thursdays are a place to display your most chic clubwear while browsing art, and by browsing art, I do mean standing in line for drinks all night. It was hard to spot the normal, good people amid the fancy people, but I'm sure if you're reading this you were a good person. Hey. 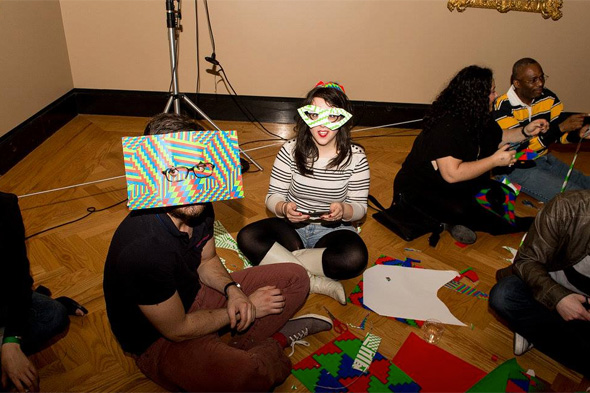 The AGO had a bunch of programming going on, including model-making and (awesome) Toronto-based new media artist Phillipe Blanchard's mask workshop, which was structured around a complicated, colour-focused GIF creation concept but ended up sending a ton of people back out into the fray wearing paper masks (kind of cool) and paper hats (oh no). Toronto, what is up with you and paper hats? It was like Nuit Blanche-lite. 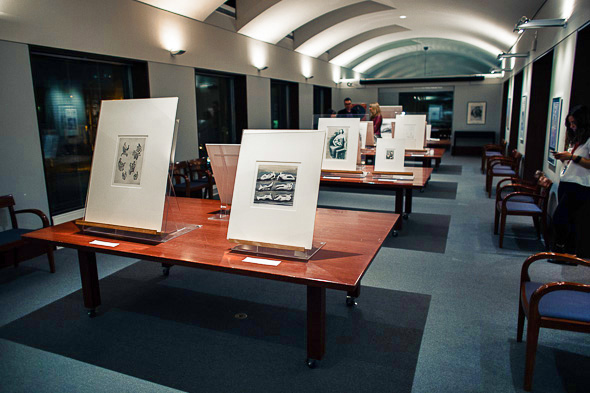 Some special Henry Moore stuff had been pulled from the vault, upping the total amount of Moore art I saw this week to definitely enough (AGO: your crush is neat but things are getting awkward for the rest of us). As I wandered through the so-so regular exhibitions waiting for the music to start and watching people take selfies via every available reflective surface, I couldn't help but wish Drake was there to liven things up. So, it did feel like a pretty normal party. 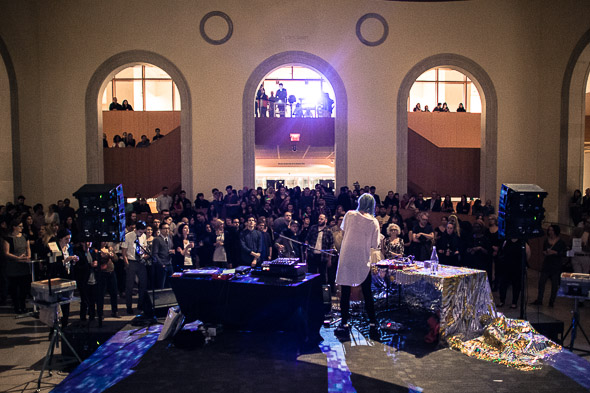 Petra Glynt and U.S. Girls were fresh from playing Wavelength 14 on the same bill, and it's a pairing that makes sense - the two independent (not indie) performers and activists are bending electronic and analog production at their will, and both have powerful voices that push to the forefront of their sound, yet the two are different enough that they can follow one another up in a way that's both complementary and captivating. 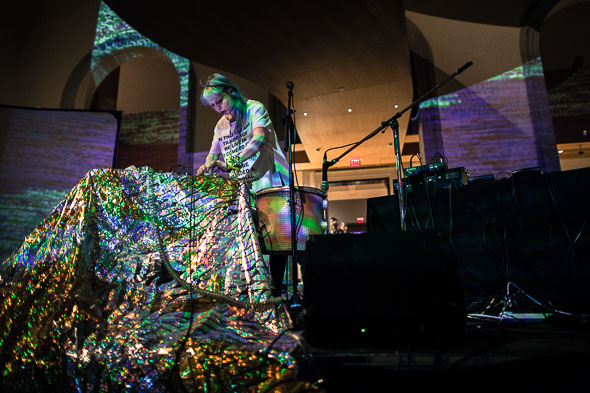 Alex MacKenzie (that's Petra Glynt, keep up) played over a table strewn with a holographic cloth she'd crafted which pooled out around the stage like a wedding-veil-turned-portal, wearing a shirt that read "In this sad and tragic age we live in, to come to the defense of mother earth is to be branded a criminal," a Leonard Peltier quote from his prison diaries. Petra Glynt is backing down for nobody. I was excited just to hear the first strains of her music from a distant room in the gallery, and abandoned whatever sad art I was looking at. 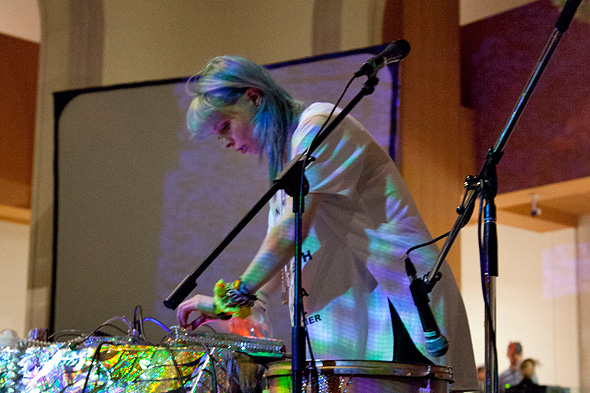 MacKenzie was more restrained at first than at other performances I've seen of hers, but as she got deeper into her songs and eventually broke out a new-ish, as-yet-unnamed track, she started cracking jokes and really dancing. If she just stood still, I'd still be spellbound by her delightfully messy yet structurally secure production and fierce voice - and to the fact that MacKenzie's live show, and flow, has matured so much over such a short time (I want to see PG collab with Drake so bad).

Some dramatic deep tones reminded me of San Francisco duo Water Borders - Alex, if you're not into Water Borders, I really think you should check them out (and vice versa, if the Water Borders guys are reading this). MacKenzie just received an Ontario Arts Council Popular Music Grant for her upcoming album, and with no hyperbole intended, after it drops, the landscape of Canadian pop will never be the same. I hope that's soon because I'm nervous about wearing out her 2013 tape on Healing Power. 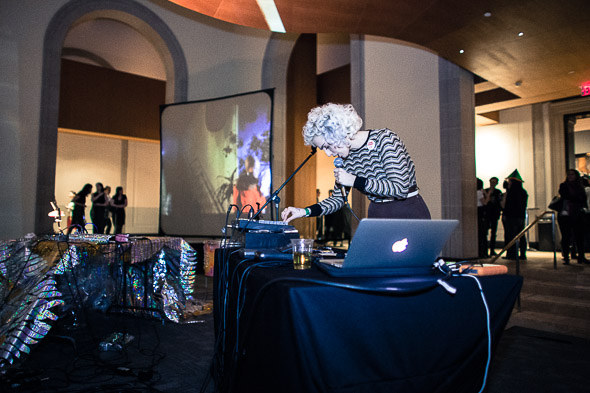 U.S. Girls performed with live drums at Wavelength, but she was solo at the AGO and I was pretty happy about that. I like watching Meg Remy's brilliant concept bridge the gaps between lo-fi experimental, retro soul, militant feminism, contemporary art, and noir, and while collaborations can be a wonderful thing, the project doesn't need a boost from anything or anyone (though I'd be into Drake dropping in for a verse with her too, if she'd let him). It had been way too long since I saw a Girls set and it was like drinking the best medicine in the world. 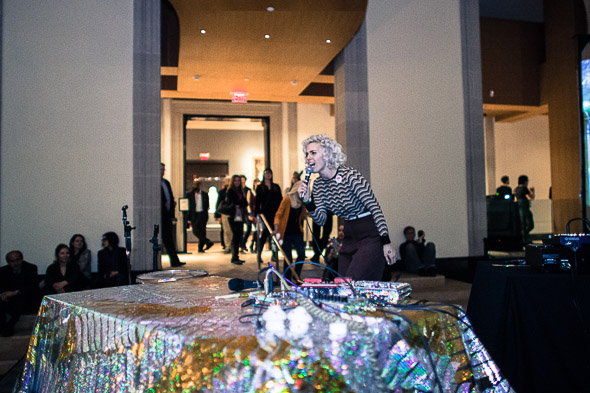 Remy's live persona has gotten so Lynchian that I'm having trouble believing Lynch did a duet with Zola Jesus and not U.S. Girls. She began the set with a slow creeper of a track, and from there on in, there was hell to pay for anyone who wasn't along for the ride. At one point I think Remy kicked a guy just for walking by the stage.

A lot of (great) performers have been there. In that moment when someone's stone cold passing you by, lashing out - via physical aggression or just a hard stare - becomes a double hit: half "come back here, you fucker, you need this," half "I don't give a damn about doing what you want." Violence is always questionable and we should talk about it, but violence in a performative format can be so refreshing. Plus, I'm pretty sure Meg Remy kicked a bro in the Art Gallery of Ontario.

Aside from that, there's the necessary statement about Remy's ability to belt it out like she's possessed by, I don't know, something supremely mighty and unforgiving. There's also my quick admission that I'm still completely in awe of what she and MacKenzie are doing right now. During both sets it sounded like the speakers were busted or inadequate, but at least a good portion of that was deliberate sound, steeping pop ideas in the heavy sludge of cultural commentary. 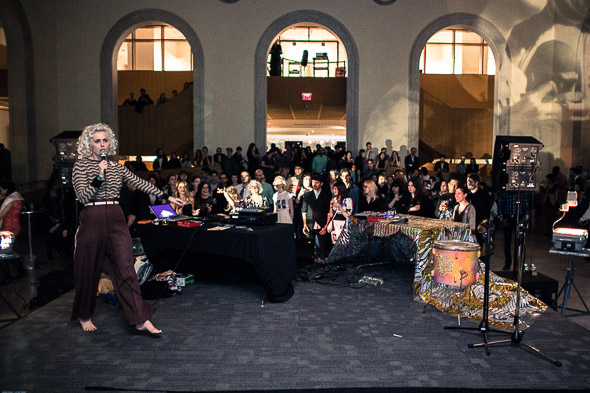 A couple of blinged-out attendees in the front row wearing bodycon dresses lost their minds after Remy pointed a light at them, dancing like mad people and mouthing words to songs they may or may not have known (OK, who doesn't love "The Boy is Mine"). It hit home how the solo experimental pop thing might not have been the best fit for the largely King Westian crowd, but both musicians made some new fans on Thursday, and now MacKenzie and Remy get to say they've played at the AGO. 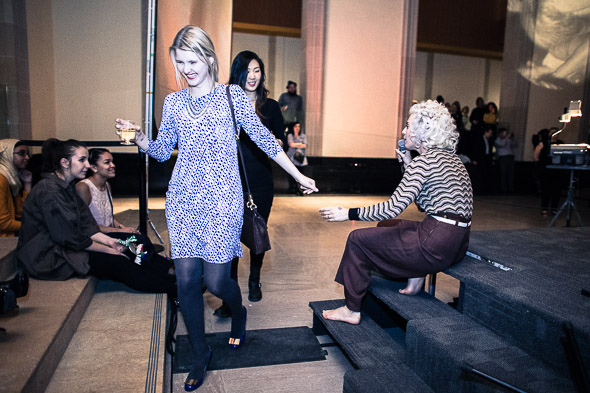 Remy (who was mad or playing mad, remember) turned on the crowd at one point. "Art doesn't excite you anymore? Art doesn't excite me anymore either." If you missed this, you were in line for a drink. "Art" with a capital A largely doesn't excite me like it used to, but Petra Glynt and U.S. Girls are two artists who constantly have me confronting challenging ideas, and swaying to their beat.

Photos by Jeff Karpala, 3rd and 6th photo via The AGO