Weird Canada talked extensively with us last July about their plans to use a $50,000 grant to build a distribution centre for Canadian music. Founders Marie Claire Flanagan and Aaron Levin explained that their music blog's new distro would focus on under-the-radar indie musicians, some in major cities but many in remote locales in Canada, connecting limited run physical releases (vinyl, CD, cassette, whatever) with fans and record stores around the world.

Back then the tireless couple were still working out the kinks of the hub, but now their time is up and Wyrd Distro will debut on Saturday, February 15th as part of the Wavelength Festival's celebrations in Toronto -- and in cities all around Canada including Montreal, Vancouver, Saint John, Guelph, Iqaluit, Winnipeg, and Yellowknife.

While Flanagan has been to seemingly every corner of the country giving talks on the distro's plans, I caught up with them via email to see what the launch will be like, and how the distro will change things for Toronto's indie musicians and music fans. It turns out not everything is cast in stone yet, but the mold is looking pretty good.

Marie, you've been traveling all over. What are you up to?

I've been working through my imposter syndrome, mainly -- it's hard to accept that people want to pay me to come talk. I went up to Music Survival Camp in Yukon, went to Dawson city to talk potential Weird/Dawson collaborations, went to Calgary for the Canadian New Music Network conference, went to Edmonton to film a greenscreen promo for the distro, and then finally back to Kitchener to set everything up.

The last time we spoke you were working the kinks out with the distro -- a little bit even within the conversation we had. What are some major changes that took place since we last talked?

Travelling all over the Yukon and Alberta really gave us a sense of how important this distro is to emerging Canadian musicians. The tools to make music are readily accessible in this brave new world, and the people who are making it. We're facilitating the relationship between makers and takers by removing the barriers between them.

Two things have changed. One, we've entertained the idea of variable markups on the prices. If you remember, the way Wyrd Distro works is that the artist sets the price on what they want to be paid for each sale and we add a small markup to cover our costs for handling, etc. Originally we were shooting to keep this markup at $1 per item (far below the typical rate). However, we're preparing for this markup to change, or be different across formats. The rate will still be transparent and visible to customers.

Another shift that isn't so consumer-focused has been us sorting out our fulfillment procedures (warehousing, shipping, and handling). We've been speaking with a few distributors on sorting this end out. This isn't too exciting, but we're hoping that we can find a company to take on this work for us so we can reduce our markup even more.

I had questions about how artists could mail their work to you and still make a profit, and one idea you had was hubs where artists could leave their work, such as record stores. Has this worked out, and what is Toronto's hub?

This is definitely a Phase II implementation. Through the organization and coordination of the Wyrd Distro launch gatherings our volunteers have made intimate connections with several record stores across Canada. We've begun to pitch this as an idea to many different store owners to get their thoughts. It's not likely to be ready at launch but definitely in the coming months. For Toronto, it's probably going to be June Records, but we're still convincing Ian. 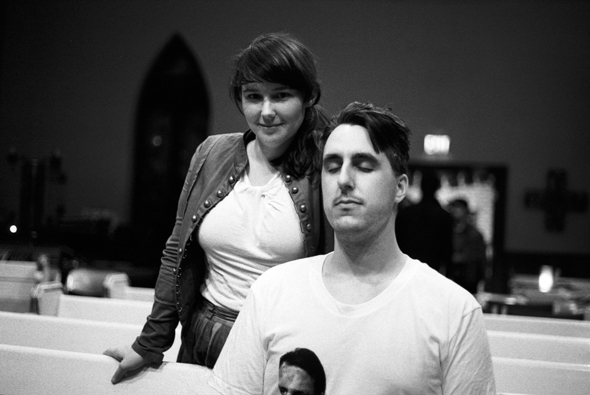 Where will you be live broadcasting from for the launch, and what will the broadcast be like?

We will be broadcasting from the back of June Records. When we envisioned the launch gatherings we really wanted them to feel like a cohesive national gathering, and the broadcast has come to reflect this, simply by not being a broadcast. They're discussions.

They'll begin with Marie and I giving a short description of what Wyrd Distro is and how it works and we'll then answer some questions that artists and people from each city have. Some of the discussions will involve multiple cities, and in those cases we're really excited to help create simple social connections between them.

Will the distro site be live on the 15th?

If not, please kill me. Yes!

Please sign up first! We want to make the distro as accessible as possible, but we have priorities, just like we have priorities on the blog. You can assume you meet our priorities if we have written about you, but it is good to check in and make sure. We aren't serving anyone by carrying music that our audience isn't excited about.

The drop-box should be viewed as a way to test out the service and not as a mechanism by which you can give us your entire back catalog. A single entity (artist, label) can put 5 copies of a single release in the drop-box. There will be a laptop at the event where they can sign-up.

What's going to be for sale in the distro so far?

Lots of vintage Bruce Cockburn LPs. I'm kidding. As of the date of this writing about 35 artists have sent us massive boxes of music. There will also be several easter eggs at launch -- vintage Toronto punk dead-stock from a collector I know, some vintage experimental tapes I've been sourcing over the years, and some rare titles we've had at the HQ (think early Mac DeMarco, Grimes, etc.)

At least one blogger saw a problem with you not supporting "those not edgy, or daring enough for Weird Canada." How would you answer that -- especially the implication some people perceive Wyrd Distro as something that will gain a lot of power quickly in the Canadian music scene?

I thought it was valid and I was really into the discussion it brought forth. Musical tastes are a subjective reflection of personal histories and experiences. I'm still going to root for the people I see as marginalized, challenging, underdogs, or underrepresented, even if that makes me come off poorly to someone who can't see the thread between my values.

What's interesting is this criticism is only present by virtue of our Open Business initiative. We're being held to a standard no one else is because we talk openly about curation and its exclusionary result. There is a painful existential dialectic at play here whereby, as humans, we're only able to define ourselves by excluding others. And Wyrd Distro is no exception to this.

If we're ever in a position to gain a lot of power within the Canadian music scene (and let's be frank here: we're talking about an online distro for material largely self-released and self-pressed in tiny quantities) we'll be the first to challenge ourselves, and there will be an open dialogue.

If we had no curation we would not be providing a unique service. I hate to say it but CDBaby does an incredible job for servicing DIY artists. They totally crush at this. They take care of everything. What we provide that CDBaby doesn't is our identity, community, and curation.

How are you guys feeling?

Stressed. Scared. Wishing we had done a few things earlier.

Catch the Wyrd Distro launch in Toronto featuring a Google Hangout talk by Weird Canada's Marie Claire Flanagan & Aaron Levin and a live performance by Carl Didur Saturday, February 15 at 4pm at June Records (662 College St.) during Wavelength Festival. The event is all ages and free to enter.