The top concerts in Toronto January 2014

The top concerts in Toronto in January will let us make new memories in 2014 to cover up brain channels leading to old, terrible memories. Let's get the bad news over with right away, though. Two of the month's biggest shows - Neil Young's Honor The Treaties benefit concert (January 12) and Neutral Milk Hotel (January 19 & 20) - are sold out. If you need tickets, it's time to invoke the Craigslist fairy.

Speaking of, it's been a good year for Toronto music Craigslist missed connections (though I encourage way more in 2014) and December went out strong. I'll start with the best - "Geddy Lee at YYZ - m4m" The four paragraph post details Geddy Lee of Rush withdrawing cash at Pearson Airport. "When you typed in your PIN, I swear it was the same exact rhythm as the intro to YYZ." I've screencapped this so we can keep it forever. 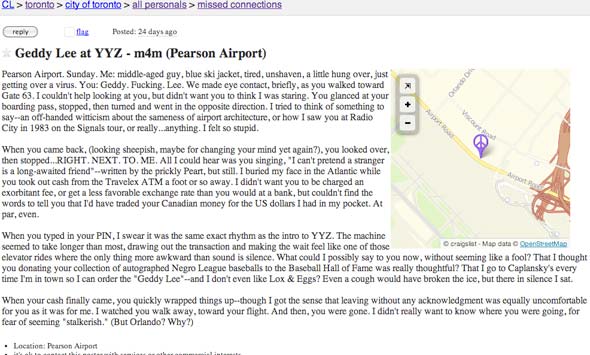 Runners up are a creepy MGMT post - basically "we talked about our exes, you have the same name as my ex, let's hook up" (what!), a message to the "psychopath from the Kills concert," and this TMI Warped Tour 2004 - yes 2004 - story. On the milder side there's a love connection from Pink, The Hives, and a second, less creepy, tale from MGMT. Any of these work out? Let us know.

Here are the top concerts to look forward to in January.

Class of 2014 A New Indie-Rock Honour Roll / January 3,11,17,18,24 / Silver Dollar / 9pm
From January 3 - January 25, the Class of 2014 concert series will rock out at the Silver Dollar Room every weekend. Headliners of the four nights include Fresh Show, Jef Barbara, Cellphone, and Akua, while presenters include Wavelength, Silent Shout, Mark Pesci's Toronto Punk and Hardcore Shows, and Aaron Miller of Arts & Crafts. Will these bands be Toronto's break out acts of 2014? Did any of these musicians ever make honour roll in school? Decide for yourself.

Feast in the East / January 4 / Gerrard Art Space (1390 Gerrard Street East) / 8pm / $8
This month Toronto's Mimico, Bella Akira, and New Fries will play Burn Down the Capital's first party of 2014. The free dinner is a Japanese noodle bowl prepared by Daniel Goodbaum. As always with Feast in the East, it's about the music, but it's more so about the people. Support the east end music scene, recoup from the holidays, and celebrate the first week of a new year in warm surroundings with good food.

Long Winter / January 10 / The Great Hall (1087 Queen St. W.) / 7pm / pwyc
Oh yeah there's one of these every month! Let's just list off the roll call. Rae Spoon, Isla Craig, B.A. Johnson, Princess Century, Doug Tielli, Weaves, Derek was D-Sisive, Absolut, Sydanie, Bizzarh and Ronley Tepler and the Lipliners are all up for the pay-what-you-can music show, plus there will be art and video installations, dance performances, a talk, an arcade, and food. Isla Craig and Weaves are on the split 7".

Fresh Snow / January 11/ Silver Dollar (486 Spadina Avenue) / 9pm / $6
One Class of 2014 highlight is Fresh Snow (playing show #1) who made our top albums of 2013 list after becoming one of Wavelength's "incubator bands" earlier in the year. If you like your rock to trance out (in a non EDM way) check this 12 minute track. It's no Magical Unicellular Music, but they could hang out together.

Pixies / January 15 / Massey Hall (178 Victoria) / 7pm / $44.50 - 79.50
Slice up some eyeballs - Ebay them, I don't know - to make eyeball martinis and cheers to The Pixies' long reunion. Quote The Pixies: "since 2004 we've been back together for seven or eight years - which is longer than our first period as a band." Kim Shattuck of The Muffs will stand in for bassist Kim Deal, who abandoned the reunion in search of happiness.

Perfect Pussy / January 25 / Silver Dollar (486 Spadina) / 9pm / $10.50
This Syracuse punk band, recently signed to Captured Tracks, has the name you wish you came up with and the sound to back it up. Perfect Pussy have screwed with noise in just the right way to achieve that illusive hype blisspoint that isn't annoying (it will never not feel fun to Google Perfect Pussy), so this should be a great tour for them. I'll stop talking, just go.

Jay Z / January 27 / ACC (50 Bay Street) / $50 - $167.50
A month after Beyonce coated Toronto in solid gold, Jay Z will follow behind - convenient, because maybe she left a bracelet behind at the hotel and now Jay can grab it and save on pricey insured mail rates. Why do I always leave jewelry in hotel rooms? Jay-Z's 2013 album included two Toronto producers (Boi-1da and Wondagurl) so it should be special. Get tickets quick while they're still available.

PUP / January 31 / The Garrison (1197 Dundas W) / 9pm / $10
PUP's self titled debut also made our best Toronto albums of 2013 list. I think they should call their next album PUG. From our writer Matt F: "aggressive and addictive, PUP (formerly Topanga) walk the line of punk with just the right amount of pop; they'll never be accused of being Sum 41 or Blink 182, but the songs are just as catchy. Gang vocals with the requisite 'whoa-oh's' make this a collection of anthems you'll have on repeat in your head, ready to shout every chorus back at them when you see them live. Fun fact: the amazing album art is actually a pencil drawing."

Shad / January 31 / Danforth Music Hall (147 Danforth) / 7pm / $18.50 - 23.50
Another one to watch from our Top Toronto albums post! This rules. Shad's 2013 album Flying Colours has pleased a lot of old fans, and made him some new ones. Will this be Shad's year? Check our review of his October Opera House Show. This (mostly) homegrown (but also multinational) rapper is all love and charms. You want to be there.

Adam Marshall / January 31 / Wrongbar / 1279 Queen W / 10pm / $10 before midnight
One more show for the last night in January: Toronto's Producer Adam Marshall runs the New Kanada label and is currently based in Berlin. Check out his new duo with XI called Graze in our bands to watch in 2014 post. He'll be hitting Wrong Bar with Jason Ulrich, Jason Myles, and Hermans (Deep North).