Jay Z is so secure he doesn't need security guards.

As the rapper/mogul/world's most famous Grammy-winning daddy launches into the climax of his 120-minute, hit-laden performance at Air Canada Centre Monday night, he instructs the yellow jackets patrolling the front of the stage to "take three and half minutes off."

The security guards oblige - Shawn Carter gets what he asks for, y'know - and slink off to the wings as the Brooklyn emcee encourages the crammed hockey arena to get up on their seats for "Niggas in Paris," the Kanye West-assisted juggernaut from pals' Watch the Throne.

It was that kind of night: living legend Jiggaman running the town with slam-dunk hits you know are coming but still sound fresher than his crisp sneakers.

Dressed in all black everything and backed by a minimal supporting quartet - a DJ, a drummer, one guitarist/bassist, and superproducer Timbaland(!) on keys - Hova mixed in the best of his 12th album, Magna Carta Holy Grail, with safe, surefire crowd-pleasers such as "99 Problems," "Big Pimpin'," and "Dirt Off Your Shoulder."

If you hadn't caught it on television, you wouldn't know that Jay Z had just flown in from Los Angeles, where he made everyone jealous of his drunk-in-love wife, scooped up his 19th Grammy and turned it into a sippy cup for his two-year-old. 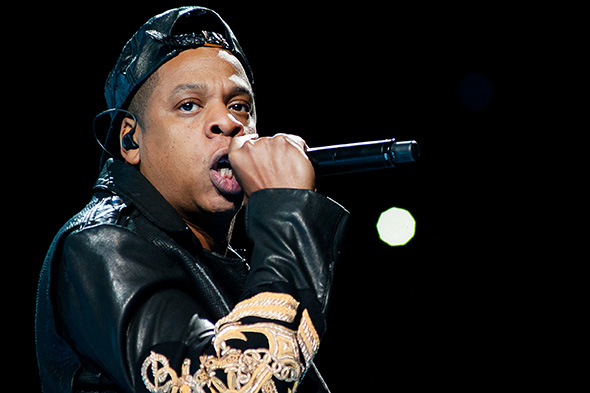 The rapper-businessman has been on the road for the 52-date Magna Carter World Tour since Oct. 3, a tour he kicked off on the heels of another tour, Legends of Summer with Justin Timberlake. And the dude is 44. Yet he still strolled the stage with the dependable demeanour we expect from our experts: relaxed, charismatic, confident, playful, and forever in control.

The whole operation - an industrial, bare-bones set, a few video splashes of red and blue, no hypemen, no dancers, no cameos, no gimmicks - stands in sharp contrast to his friend Kanye's current tour, an elaborate and expensive theatrical experience. Jay Z narrows his focus to the songs, delivering what the people want to hear with economy and precision.

Jigga's breath control on the rapid-fire "Jigga What, Jigga Who" is flawless, and his rare rendition of 1996's "Dead Presidents" brought back a flood of memories for the older heads in attendance. (If there is one complaint about a Jay-Z show, it's the lack of surprises in the set list.)

So when it came time for the encore - led off, predictably, by "Encore" - it felt like a lay-up. The crowd, some of whom had seen him just six months prior, had already nestled into his palm. "Empire State of Mind" gave way to "Izzo (H.O.V.A.)" gave way to "Hard Knock Life (Ghetto Anthem)" gave way to a lighters-up "Young Forever," dedicated to Nelson Mandela. 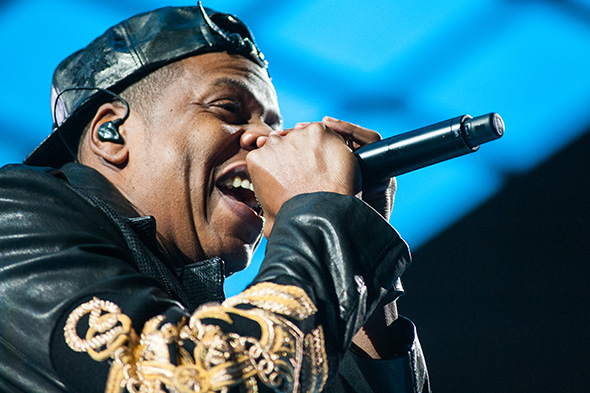 Higher (Intro) / U Don't Know
Crown
On to the Next One
Holy Grail
FuckWithMeYouKnowIGotIt
Beach Is Better
99 Problems
Picasso Baby
Dead Presidents
Pound Cake
No Church in the Wild
Somewhereinamerica
Big Pimpin'
Jigga My Nigga
Nigga What, Nigga Who (Originator 99)
Dirt Off Your Shoulder
I Just Wanna Love U (Give It 2 Me)
Niggas in Paris
Tom Ford
Public Service Announcement
Clique
Run This Town