Why you need to know about the Hamilton music scene

The Hamilton music scene is blowing up right now — even some Toronto music fans are starting to take notice of both the artists and bookings The Hammer is stacking up. Raised amongst steel mills, factories and smoke stacks, while being fed a steady diet of working class ethics, it's been said Hamilton's musicians grow up to be a grittier and more down to earth breed than their cousins in Toronto. I may be biased since it's my hometown, but I've always found the music scene in Hamilton to be a tiny bit more real than Toronto's. So what's going on in Hamilton's music scene right now?

To sum it up, in Hamilton starting a band means getting together three times a week and playing your heart out, not really caring what the outcome is long as you make good music and get a break from the doldrums of life in Steeltown. Meanwhile in Toronto starting a band is more like this — "I think we should all wear leather jackets on stage and like get a chick to play drums and like I got this friend at OCAD who'll shoot a video for us then we can get it on a bunch of blogs. Oh and my coke dealer said he would manage us and I'm totally hooked up with this dude who will get us killer PR and help us book a tour in Europe — we just need to write some songs first."

Am I oversimplifying that to prove a point? Of course — but I've regularly heard some version similar to that spewed out to me by countless vacuous hipsters. That's not to say loads of musicians in Toronto don't have heart — we all know many of them do. Enough comparing these two great cities, let's get down to brass tacks and talk about what's what and who's who in Hamilton right now. 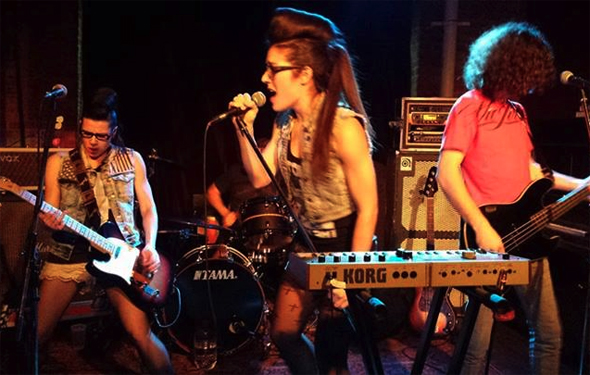 Clubs
If you ever take a wrong turn and find yourself in the Hammer, you'll want to head to the James Street and King William area. Homegrown and Baltimore House are two of my favorite venues in the city they are quaint and cozy, and all Hamilton's biggest players can be seen here.

Rock
Hamilton is basically the last stop on the Highway to hell. Right now the scene has lots and lots of fresh, young blood. Some of the young blood that stand out from the pack are White Crowleys, WTCHS and the Dirty Nil. Goth rock legends, The Birthday Massacre, also have their roots firmly planted in Dundas, Hamilton's suburb and home of the Dundas Cactus Festival, but like many Hamilton musicians they moved to Toronto years ago.

Punk
For all things punk, your best bet is the Burly Calling events, they were started by the Saint Alvia Cartel. If you wanna get technical this takes place in Burlington, but they are close enough to be part of the same music scene.

Hip Hop
For the hip hop scene we have Jeremy Chambers who is absolutely killing it right now, his new video for "Turnt Up" is basically just a giant party that you wish you were invited to, but never will be invited to, 'cause your just not cool enough! (Sorry bro, I don't make the rules).

Electronic
Hamilton is TECHNO! Smoke stacks, steel mills, drugs, crime and urban decay, that is Hamiton and its also everything you need to make good electronic music. Big time global players like Caribou, Junior Boys, Orphx, Huren and Alixander III from Azari and III, all hail from the hammer.

A big shiny new star on the Hamilton scene is Jessy Lanza. Her new video for "Kathy Lee," shot exclusively in Hamilton, is a beautiful depiction of life in the Steel City.

Writing by Aaron Cunningham. Lead photo of HUREN from Facebook. Photo of Silvergun & Spleen via The Baltimore House.