Toronto Halloween parties make for the best combinations of fun, menace and intoxication of the year. There's something about wearing a costume that makes everyone go a little crazy. Better embrace it. Link arms (or bones) with the hordes of scantily-clads and I-can't-believe-they're-not-dead zombies and let loose on the dance floor, or get completely terrified just for the fun of it. This year Halloween lands on a Thursday, meaning most of the parties go down the weekend before. Whether you want to find the best dance party or the biggest adrenaline rush, this guide has you covered.

YOUR HALLOWEEN COSTUME PHOTOS: Whether you're Instagramming or have your DSLR in hand, we want to see your Halloween costume and party photos. Add them to our Halloween stream by tagging them #halloweenTO on Instagram or by uploading them via this page.

Toronto Zombie Walk
On October 26th, join a bloody mass of gore-enthusiasts in Nathan Phillips Square for the annual Zombie Walk. The tossing of a severed head marks the start of the parade at 3pm, followed by live entertainment at 5pm. It's a sure-fire way to get into the spirit of terror before heading out for your debaucherous Saturday night. Saturday, October 26th, Nathan Phillips Square, 3PM

Church Street's Halloween Night Block Party
It's all black and orange and rainbows in Church-Wellesley Village for the annual Halloweek celebrations. Wander the streets with tonnes of parties and pubs to pick from. The week-long celebrations go out with a bang on the 31st, when the streets are shut down for an epic Halloween block party. Hundreds of over-the-top costumes to take in, and one costume winner to be crowned at the 519. Street closure: Thursday October 31st, full details here, 6:30PM - 2:30AM

SLAUGHTERHAUS
The Gallery at 99 Sudbury will be transformed into a blood-soaked industrial Halloween horror show by Mansion and Breakandenter. There will be a huge audio-video labyrinth to wander through, and Berghain resident DJ Marcel Fengler, along with a huge, huge array of Toronto talents, will be spinning "tortured techno, hallowed house, and dark disco." When you work up an appetite, there is a pig roast outdoors. Hence Slaghterhaus. The early bird tickets have already sold out, so if you wanna get in on this, pony up $25 advance or $30 at the door. October 26th, 99 Sudbury, 10PM, $25 advance

Blood, Sweat & Queers at The Steady
The new queer friendly bar will be throwing one hell of a dance party on Saturday night. Bruce LaBruce will be providing the beats, and the "Thriller" dance may or may not be busted out. You can win cash prizes for best costume, and even some insight on your evening's romantic choices with a psychic reading. Only $5 cover, so you can splurge some extra money on making your costume that much more fabulous (and cheap PBR). Saturday, October 26th, The Steady (1051 Bloor), 10PM, $5

The Hangman's Ball
Rue-Morgue will host their 16th annual Halloween Party which looks to be one of the best costume parties of the season, and maybe the most lucrative — win best costume at midnight and there's a cool (probably cursed) $1000 cheque in it for you. Cruelly named Violation of Violet, One Arm Bob, Geek In a Cage, and Dr Black's Plastic Surgery Disasters will be providing entertainment. Friday, October 25th, The Courthouse (57 Adelaide) 9PM, $25 advance 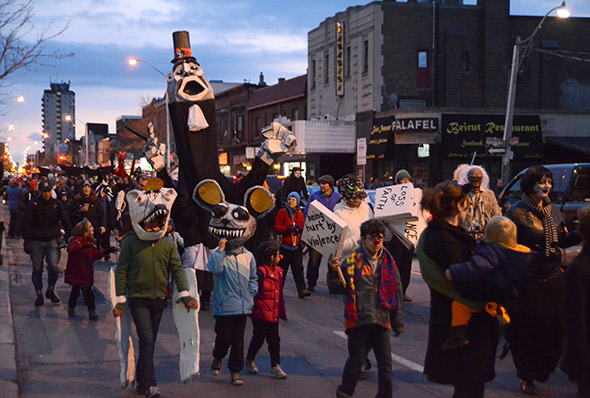 Night of Dread
Clay & Paper Theatre's fourteenth annual Night of Dread Parade will take place in Dufferin Grove Park this Saturday. It's an evening to call on, mock, and banish fear. Join musicians, puppeteers, dancers and stilt walkers in taking to the streets. The dress code is, as always, black and white and dreadful. Saturday October 26th, Dufferin Grove Park, 4PM

GHOST HOLE â…¤
On October 26th, a ghost ship will carry hundreds of brave art fans to the shores of Gibraltar Point on Toronto Island. The old (and supposedly haunted) island public school will display works from over 50 artists. Musical acts will entertain throughout the evening, and strange rituals will be performed to the crowds. Bring some friends you trust, or make some friends who can't run as fast as you, because this one could get creepy. The ferry ride costs $7, and tickets are $13 at Soundscapes or $15 at the door. Saturday, October 26th, 6PM - 2AM $13 advance

360 Screenings - Halloween Edition
This live performance / film hybrid series which reveals the location, dress code, and oh, which film they'll be screening only 24 hours before the shows is back with a super spooky Halloween edition. If you want to grip a ticket you'd better hurry as the first screening on Friday and the last screening on Saturday are already sold out as of this writing. Read more about 360 Screenings here. Secret locations, Friday, October 25th and Saturday October 26th, Various showtimes.

A Twin Peaks Halloween
Join the ghosts of Laura Palmer and (just kidding, no spoilers) at Holy Oak on Halloween night along with some very strange living people, aka fans of David Lynch's cult TV series. The Sandy Pockets live at 9:15 and 11:00 and the best Log Lady costume wins a prize, but why go the traditional route when you could be David Duchovny in drag. Props to whoever donates cherry pie. Don't trust the owls. Thursday, October 31, 2013, Holy Oak (1241 Bloor St W), PWYC

4th Annual "Fresh Prince of Bel-Air" 90's Halloween
Relive 90's nostalgia inside the Fresh Prince themed 6 Degrees club, where 3 DJs will be spinning old school hip hop, RnB, and 90's pop hits. There will be confetti cannons, party favours, and prizes for the best costumes straight outta the 90's. This party has sold out the last 3 years in a row, so get your advance tickets. Saturday October 26, 6 Degrees (2335 Yonge Street), 10PM, $25

Burroughes Haunted Mansion
For the fifth year running, the Burroughes Mansion loft will host its Haunted Mansion Halloween bash. With their reputation for wild parties, and the rooftop terrace view, the $25 price tag doesn't seem so bad. The line-ups will get scary long early in the night, so plan to show up early. Saturday, October 26th, The Burroughes (639 Queen St W), 9PM, $25

Junction Pumpkinfest
The Junction Train Platform will host pumpkin carving, plus there will be pumpkin-themed activities and treats in participating businesses around the neighbourhood. I'm hoping to see at least a few dogs in pumpkin costumes — don't disappoint, Junctionites. Dundas St W at Pacific Ave, Saturday, October 26, 2PM - 6PM