Peaches celebrates the life of Will Munro at Lee's Palace

Toronto's ambiguous underground used to come together once a month at Lee's Palace to celebrate life, love, and what should be our innate ability to see beyond race, colour, sexual orientation or preference. The party was called Vazaleen, and the leader of the freaks was artist Will Munro. 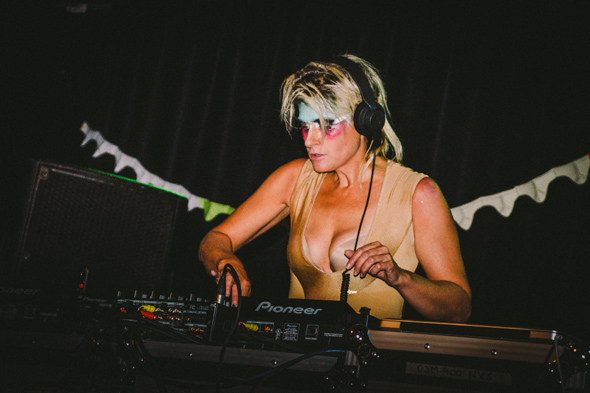 Will Munro tragically passed away from a brain tumour three years ago, and Toronto's free-thinking youth movement has never been the same. To commemorate his passing, and his burning activist spirit, Sarah Liss has authored an oral history of his life Army Of Lovers: A Community History of Will Munro (Coach House Books) starting from his OCAD LGBT days. 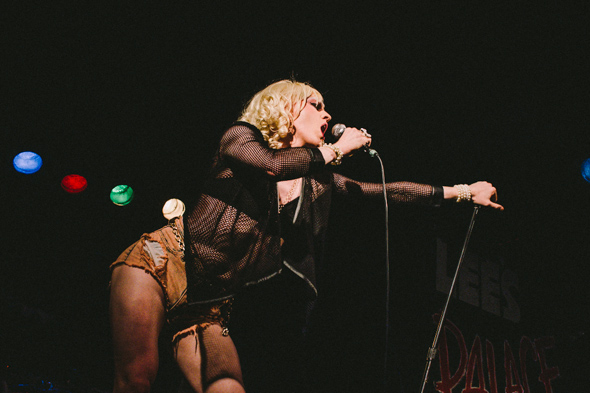 "Will was central to the coming of age of the city and I felt that his life hadn't been documented in one book. I was really excited to have a chance to put it all together." After a brief conversation with the author, the night's celebrations opened with a performance by Gentleman Reg's electro-drag alter ego, Light Fires, a cozy warm up to the evening's tasty headliner, Toronto-born Peaches.

Peaches' side project with DJ Betti Forde were on next. The duo demanded the audience's help in performing their recent collaboration, "Bored of Rob Ford", birthed from the summer's Crack-In-The-Box scandal, amid a slew of other anti-Ford pop songs. 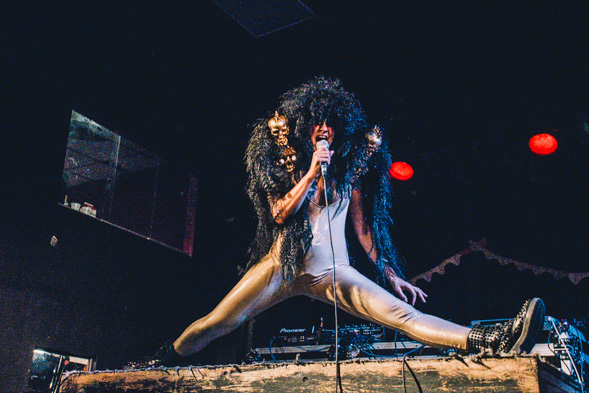 Then Forde retired and we were left with raw, uncut Peaches, in a plasticky skin-tight and sparkly gold body suit and a never ending rotation of silly costumes like the plastic punk skull epaulettes and 80s hair metal wig that she whipped off mid-splits to reveal her signature shock of dirty blonde hair. And then there was the the garland of plush sewn together boobs, and the penis costume complete with seemingly never ending white veil that emerged from the top of her head. 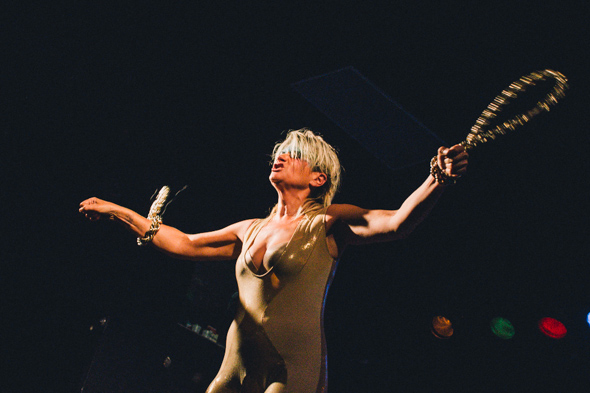 At another point, she donned two massive gold chains, and swung them around her neck to a dirty Moombahton rhythm. Later on champagne emerged, and she stuck her mike firmly between her breasts, rapping to "Fuck The Pain Away" while fiddling with the cork like she was unwrapping and applying a giant condom â all without missing a beat.

Merrill Nisker (a.k.a. Peaches)'s stamina, soprano-to-gritty-rapper voice and dedication to the art are without comparison. If you ever have a chance to see Peaches seemingly never ending cabaret show, do not miss out, you will not regret it. Her song and message were equally complimentary to the work of Will Munro. Props to the Vaza-Launch crew for pulling it all together. 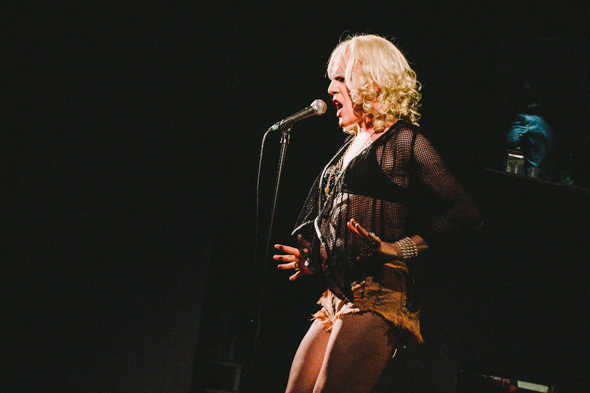 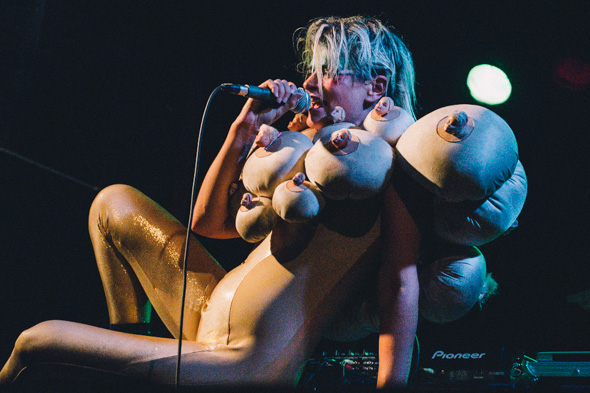 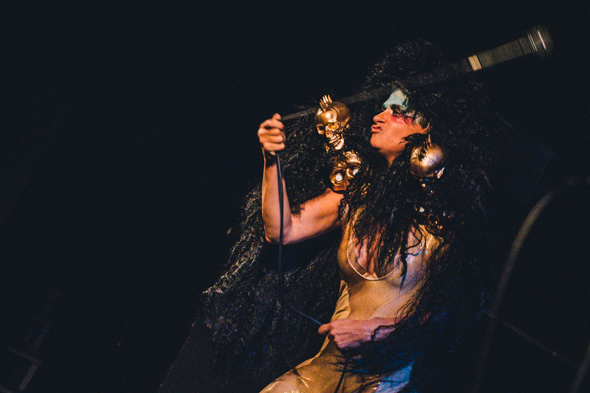 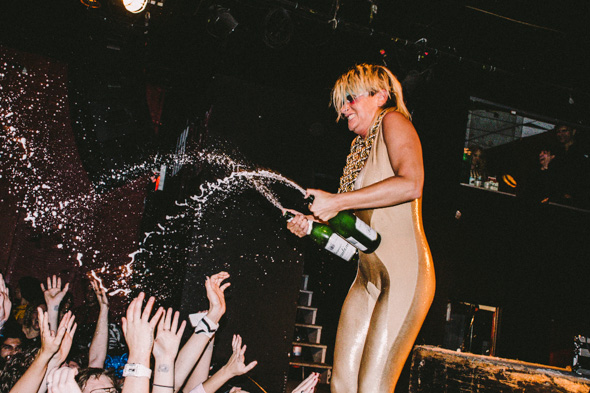 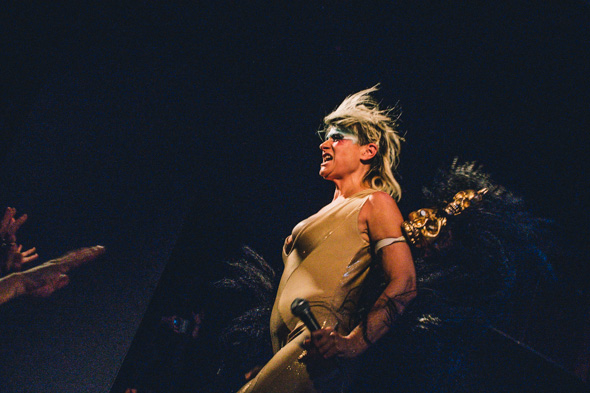 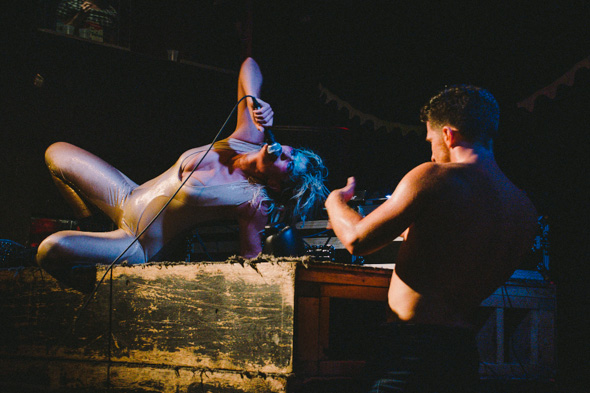 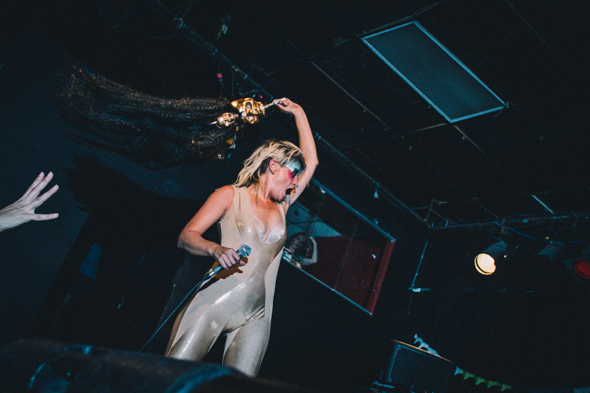