I arrived late to the Soft Metals show this weekend, because my love for Soft Metals blinded me to the idea that anyone would make the seductive, moody band, touring up all the way from LA, play before 10:30 on a Friday night. My bad. Of course The Drake Hotel would do this.

When I reached the door I already knew I was late due to the magic of text (sext, since this is Soft Metals), and spent a couple of minutes grinding my teeth outside while two women grinded against the bouncer (an aside: I get that it's The Drake, but damn, everything on Queen West West / Ossington has a bouncer now. You need to pass a bouncer just to buy Skittles.) "Isn't my friend gorgeous" Woman 1 asked. "She's very sexy" rasped the bouncer, looking Woman 2 up and down at close quarters. I threw up in my mouth. Skittles, whiskey, and sadness. "FML," I thought. 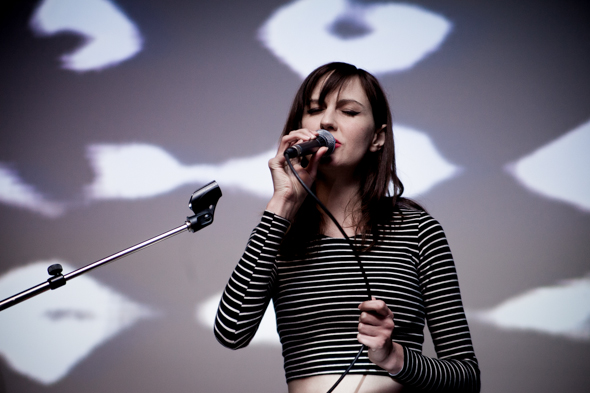 The Drake is the best worst venue in Toronto: after bolting downstairs, I had a great view of the stage, because no one was there: each dancer, or (it's Toronto, at 10:30PM) standing-arounder, had at least a half meter of personal space. I watched the band in silence for a few moments, stunned by muted reality. I really wanted Patricia Hall to be Yasmine Kittles of LA contemporaries Tearist, thrashing with a piece of metal, crushing fans, screaming, blind with aggression. 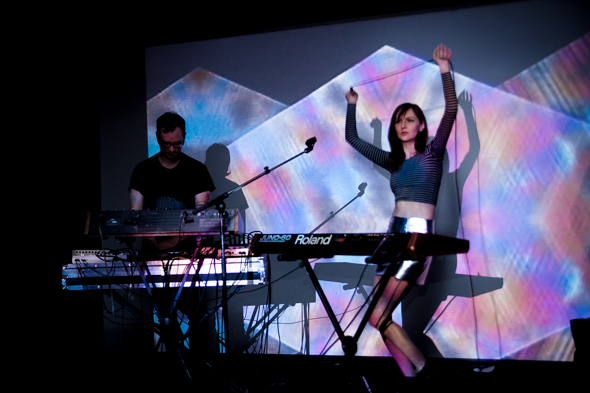 Then the miracle that is a good show happened. I felt better. Silver, black, and white clad Hall was doing everything right. She swayed the perfect amount behind her synths. Her flawless voice carried across the bar with sweet and angelic yet almost monotone gothic melodies. Emotion was restrained, yet fully bloomed. Ian Hicks stood at Hall's side busy with his array of samplers and gadgets while high saturation projections bathed the pair in vibrant hues. The volume could have been louder, and the band echoed their recordings more or less to the letter, but the total exhibition of sound and colour was reviving. 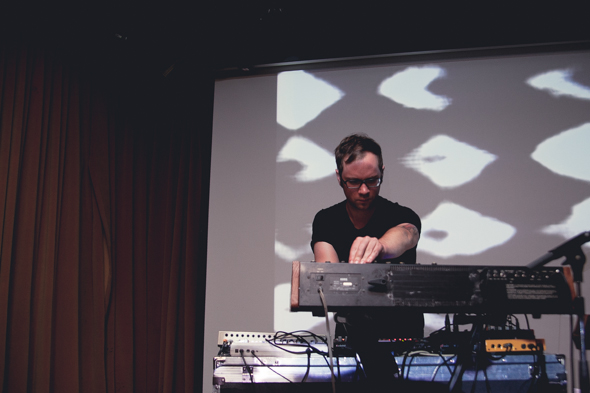 Touring is full of unpredictables. Is anyone going to show up? Will you play at 10PM, or 3AM? Will there be bed bugs at the hotel? Will someone post photos from the show, begging you to return soon? "This is our first time in Canada; we've always wanted to come here. The border was easy. We're going to come back!" Hall beamed near the end of the set, smiling. We (the two dozen people in the room) cheered. 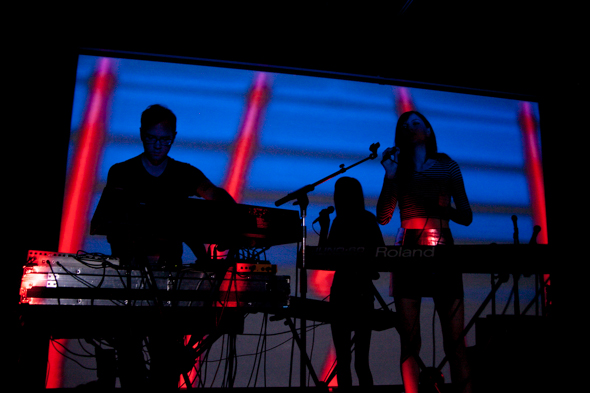 Why be sad at a goth show? Not to genre simplify: Soft Metals are a cold wave influenced synth pop duo who craft subtle, textural, alluring dance tracks begging for night drives and foggy, slightly ennui house parties. They reminded me of Bushwick's Le Sphinxxâwho've also been releasing lovely crystal-glazed happy goth tracks this yearâonly without the ceremonial skulls and incense. Soft Metals' new album Lenses is as solid and sensual as their last. Highlight track "In the Air" has an uplifting tropical vibe, and sounds like a dance club in heaven, if heaven only exists as a place in the clouds achieved by opiates.

Near 11PM, there were sufficient calls for an encore, but Hall laughed. "We have a curfew!" She said, smiling, but perhaps aware of the tragedy: if there was a second party coming up in the Underground's bar, no one had arrived for said party. "We can't!" I begged them to come back soon with my mopiest love-gaze. You should have been there, but you probably would have been too late anyway.