Just after dusk last night, Icelandic pop star and generous muse of the world, BjÃ¶rk bounced happily onto the grandstand at Echo Beach to perform songs from her most recent album Biophilia and from her decade and genre crossing career as a challenging artist who's constantly in flux.

Since I will never have children, I sometimes feel in my lifetime I will never have the opportunity to explain who BjÃ¶rk is to anyone except my future pug dogs, who will not understand why they are wearing a swan dress or why I am so happy — but I suppose this might be for the best. Singer, musician, producer, artist, inventor, sometimes actress, and investigator of televisions, BjÃ¶rk simply is.

As BjÃ¶rk has effortlessly tapped cross-cultural appeal, the beach (people, it is a beach and there is sand there: lot of Torontonians learn this the hard way. Please spread the word. There is lots. Of. Sand. at Echo Beach) was a landed Noah's Arc of music fans: two of everyone, from frail, lovely ancient couples in lawn chairs to Junction-preppy parents with children in toe to girls in neon EDM rave gear and various subgroups of picture-perfect fashionistas. Then of course, with no regard for the two of each rule or the sparklyness of oh, I don't know, a BjÃ¶rk show, there were masses of The Bros outnumbering us ten to one, in their baggy, unimaginative plaid/camouflage shorts, which makes me wonder, with a quizzical yet deeply troubled BjÃ¶rk-like frown, if one day soon the bros will devour us all. We mustn't let them. 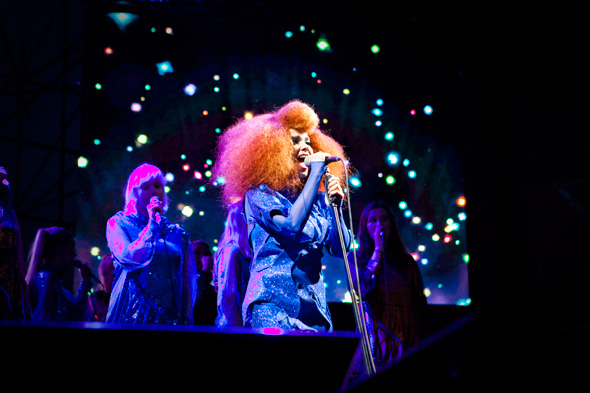 I hate to say I missed Mykki Blanco in favour of re-hydrating at home (not a euphemism for pre-drinking, literally pounding water to avoid passing out in the sand), but I caught Death Grips' thundering (deafening for some of the age-advanced audience) minimalist stage show and was in awe of vocalist/rapper Stefan Burnett's energy — and his banshee screams. While I'd a hundred times have preferred to see their sweaty industrial set not on a sandy, sunlit grandstand but in a dark, packed basement with a battered fog machine choking and spluttering the occasional flash of flame in fans' faces, Burnett himself was on fire and it was the best possible limited reality.

There's no way to talk about BjÃ¶rk without rolling around in the glitter dust of hyperbole so I'm going there. BjÃ¶rk came out wearing THE sparkliest dress ever in the history of life on Earth, such that it might blind the eyes of her enemies and dazzle the hearts of all pure beings. She wore, like a queen, the larger than life (except this is life) teased red wig featured on her Biophilia album cover and never, ever took it off to let her roots breathe, because she is BjÃ¶rk, and her sweat has regenerative powers. I would estimate that when speaking of BjÃ¶rk's silhouette, 40% of that silhouette was wig, later 41%, as some pieces came loose from the fray like curled red lightening bolts. 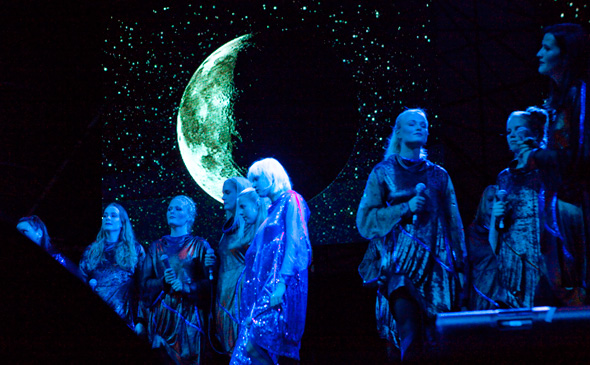 Also reflecting light into the retinas of any lifeform within a kilometre of the beach were Icelandic female choir Graduale Nobili, possibly BjÃ¶rk's white magic coven, dressed in twinkling blue and gold frocks. Imagine an all female The Polyphonic Spree if they were way less creepy and just vibed like witches. From now on I will refer to Graduale Nobili as The Girl Gang.

The Girl Gang were responsible for ambient choral harmonies, assorted back up vocals, and the "she loves hims" in "Pagan Poetry" (excuse me, just remembering my own death and rebirth as a swan) — and for enthusiastically dancing the twist in unison like no one has in decades, sometimes to "drops" which have been added to BjÃ¶rk songs, because BjÃ¶rk is a cheeky genius. If you didn't like the drops and the ensuing fanatical dancing to said drops, you are maybe not ready to be alive. Sometimes The Girl Gang's dancing controlled the stage lights, which totally made sense.

From time to time BjÃ¶rk would speak to the audience saying things that were missing proper pauses like "thank you I'm grateful" (note the lack of comma please) which would cause everyone in the audience to melt and become a lumpy flesh sandcastle. When she moved to side of stage to sing in the dark I became aware of how small she is, giant wig or not. It was the only time I could tell: the tiny woman is a warrior of activity and sound, and kept The Girl Gang's spirits high, leading dances and casting spells before HD projections of undersea life, digital landscape renderings, geometric shapes and, obviously, outer space.

Then there's less important stuff, like BjÃ¶rk's boring industrial looking enormous cylindric Telsa coil bass-fuzz lightening instrument that hung from the roof of the stage and looked like the enormous cylindric thing that Roy Andersson is building if only because it is enormous and cylindric and completely otherworldly and amazing (kidding about the boring thing: it's just that BjÃ¶rk upstaged the giant Telsa coil lightening instrument.)

Of course BjÃ¶rk's voice is amazing. While this goes back to never being able to explain BjÃ¶rk to anyone so why bother trying, I'm a sucker for anyone who can roll their r's while singing (please address your own audio recordings to @AubreyJax on Twitter.) Anyway, of course her voice split the night like a white hot spear from heaven and of course when the smell of the water after dusk wafted across the beach while an adorable starfish colony was projected at hyper speed it was calming (BjÃ¶rk would say restful) to the point of great personal enlightenment on behalf of every person in the Greater Toronto Area who has ever wished upon a shooting star (all shooting stars are BjÃ¶rk.) 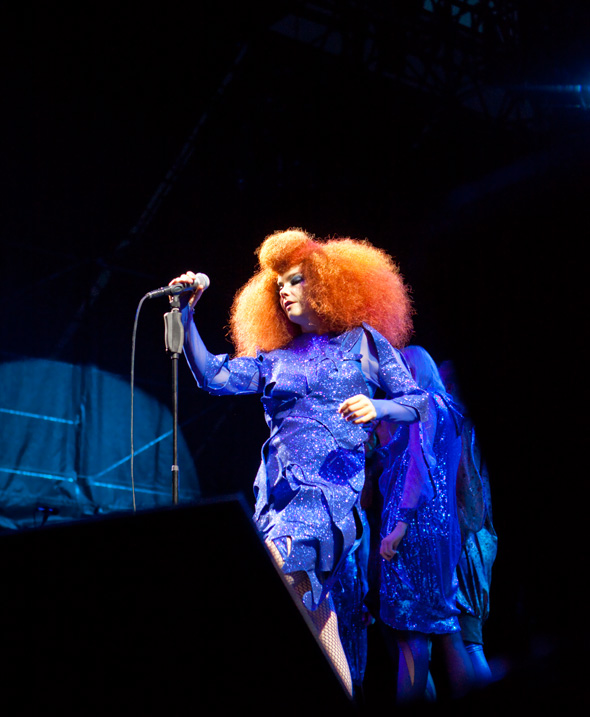 Born of a distant sun that was inseminated by volcanic matter, BjÃ¶rk closed off the set by bringing a volcano on stage, or making a volcano out of The Girl Gang while lava poured on screen. For a moment I think there was real fire on stage, then a fountain of sparklers, but if you weren't at Echo Beach I'm sure you felt heart palpitations around 10:30 p.m. last night and wondered if you were dying, so I apologize.

Drop or not, sometimes a song is just a song, but sometimes a song is a BjÃ¶rk song and it's a treasure from the centre of Venus that she has mined for us, polished in the ever humming rock polisher she keeps in a cabinet in her belly, and given to us to teach us to be good human beings. As BjÃ¶rk slowly incants in "Crystalline," "we mimic the openness of the ones we love." Once we open our hearts to the omniscient presence of ghost BjÃ¶rk and her dreams of a technology via true love uniting the human race and all conceivable life, we will be at perfect rest. BjÃ¶rk dedicated "Declare Independence" to Trayvon Martin, a reminder that the world of imagination and hope is threatened by the barriers we place or let stand in our corporeal world.