Young Galaxy usher in the summer at Lee's Palace

Young Galaxy ushered in the summer at Lee's Palace on Friday night. With ice cold beer in hands, a gentle mist cooling the humid concrete outside, Lee's was a head-swaying dance party breathing in the rolling, lush soundscapes of "New Summer." It was an apt reminder of how good this city really is in the summer months and reason why Young Galaxy was pumped for Toronto (their first Toronto show in almost two years) to be the first Canadian destination for the new sounds. How fitting.

Hot off the heels of their fourth effort, Ultramarine, the Montrealers (by the way of Van City) have honed and expanded on their danceable dream pop. With the departure of their last album, Shapeshifting into rhythmic electro pop, which was produced by Dan Lissvik via Skype from Sweden, Ultramarine carries the torch with confidence. It's quickly apparent that the band packed up and headed to Sweden to produce the new album with Lissvik in Sweden this time around. It shows.

The outcome is a tightly packaged synth-heavy pop album stuffed with world rhythms ("Fall For You"), perfected melodies ("New Summer"), pure dream pop "Sleepwalk With Me" and rolling electro-pop narratives for "Pretty Boy." And lead singer Catherine McCandless' at-times terse lyrics paint distant narratives of summer love, nostalgia and, to be safe, nautical poetry with "I was a sailor grooved with tattooed blue / And I've crossed the sea for you" on "Hard to Tell." 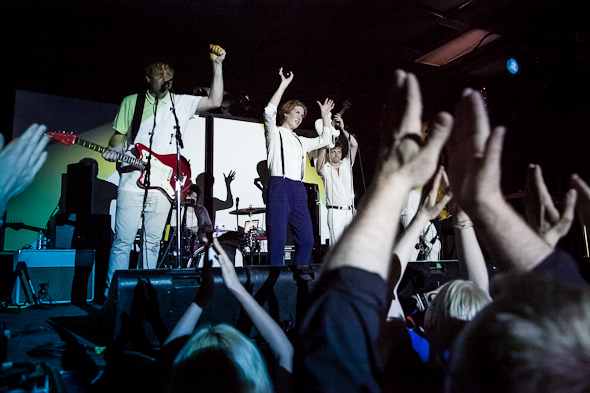 While it may all seem to be surface-level, danceable pop, there's a noticeable depth, something akin to most of Young Galaxy's past work. An earnestness. And while McCandless commands the songs and audience, for brief moments the powerful soundscapes do overpower her vocals; at other times, live, she overcomes this and reaches Florence Welch prowess. It seems to depend on the song.

With a fairly packed and eager crowd, the quintet, all clad in white, had a shapeshifting, colourful and somewhat trippy projector that painted the band in diverse, artistic projections for each song. It gave a dreamy ambience to complement the diverse electro sequencing. It also helped to encourage the crowd's shifting feet I reckon. 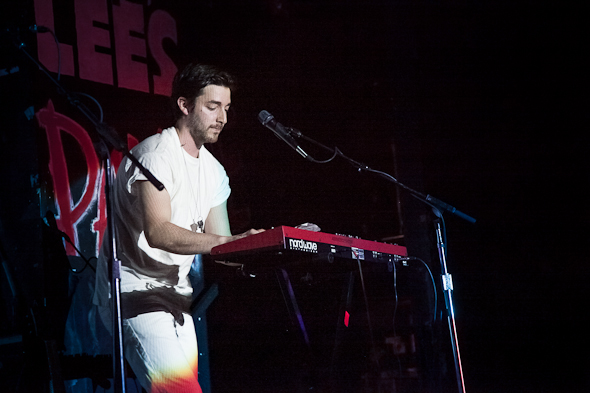 The set is tight and calculated. With a brief encore, the set time was a trim hour-long smouldering dance fest. I was surprised the crowd didn't demand more. They seemed content, however, that summer had arrived and made their way to the humid air outside with lyrics ringing true in our heads: "Here it comes again the beautiful warm weather."

See more photos from the show in our Live Music stream.