Is it worth the trip to Casino Rama to see a concert?

Billy Idol played Casino Rama on Thursday, so I decided to make the trip up to Orillia to see the show, since he's somehow not playing Toronto on this tour. Was it worth the trip?

There seems to be a growing trend for mostly older bands to do the casino circuit in lieu of playing in nearby big cities. This is the first time I decided to check out a show there. 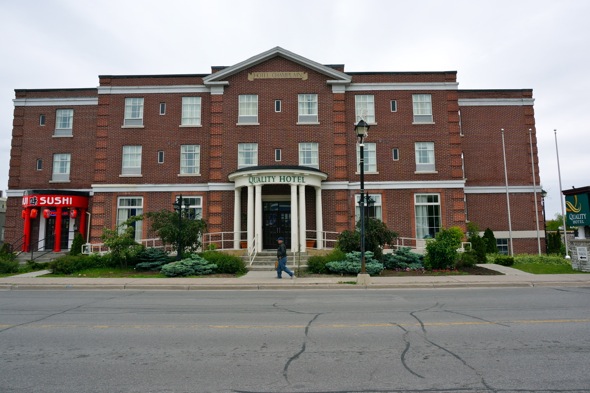 I had hoped to take my girlfriend to Rama by way of a two-hour scenic motorbike ride, but it was cold and rainy, so I considered the options. There's the Tai Pan Tour bus to Casino Rama, which is quite the deal at just $10 per trip. If you don't mind being beholden to their bus schedule. We rented a car instead. Rama is nearest to Orillia, so we decided to make an overnight trip of it, finding this quaint Hotel Champlain Quality Hotel via Hotwire.

After we checked in, I bumped into a friendly guy wearing a Billy Idol VIP laminate pass in the hotel lobby. His sister is the head of the Billy Idol Fan Club, he said. But he couldn't get us backstage. He did mention that if we got to Casino Rama by 5 p.m. we'd likely be able to get into the soundcheck.

Not being the hugest fan, though, we opted instead to check out what culture could be found nearby. We hit up the main drag of Orillia, strangely named Mississauga Street. It almost felt like home! There's a bunch of neat spots in town, like the Mariposa Market, where they had Muskoka Berry Tarts. 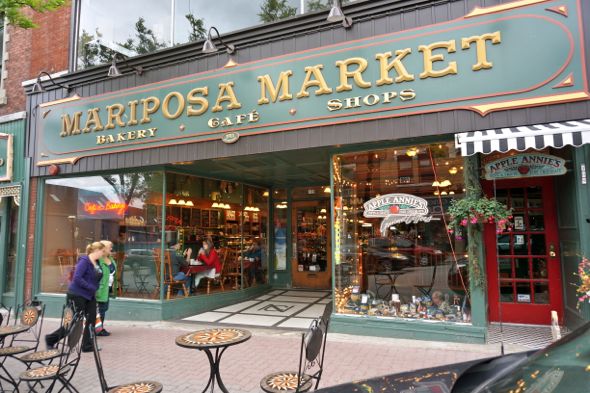 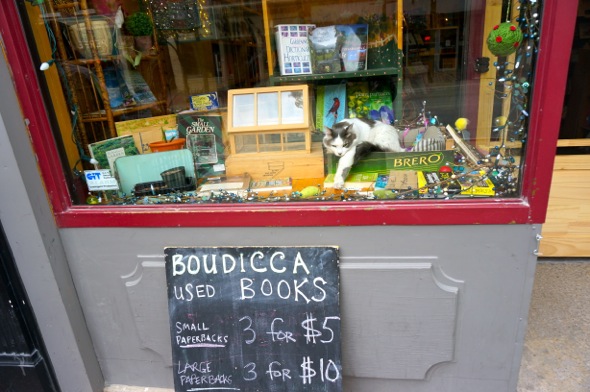 A few doors down, a lazy cat welcomed us in the window of Boudicca Used Books. Next door was Alleycats Music & Art, which was mostly filled with overpriced vinyl â not too dissimilar from Toronto. 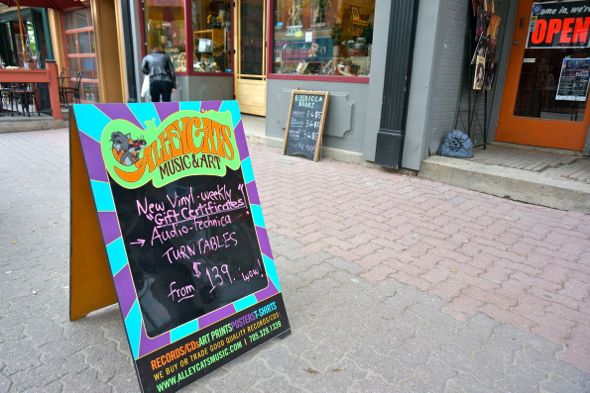 They did have a cool selection of buttons, including one of Corey Heart. 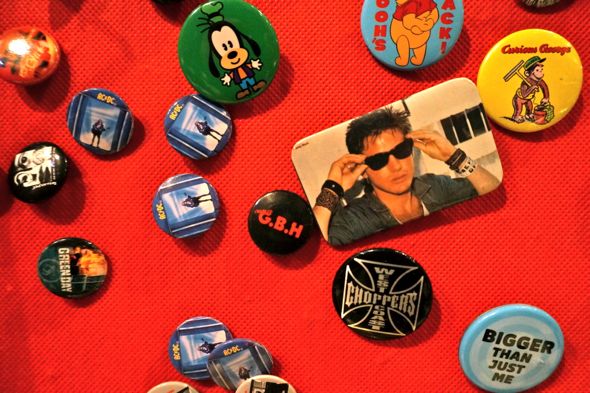 And look who was staring down at me from the top CD shelf! 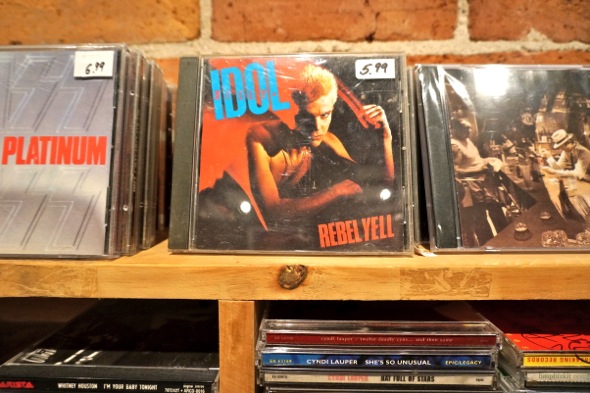 Across the street, I really wanted to check out Extreme Rockstar Clothing, figuring it looks like a place Billy Idol might be found hiding out in. But it was inexplicably closed on this early Thursday afternoon. 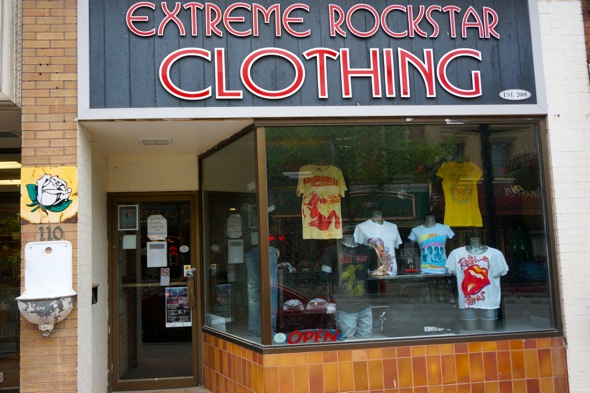 It was getting closer to showtime, so we found a place to eat nearby the hotel instead of getting there early and taking advantage of the $19.95 all-you-can-eat buffet at Casino Rama. 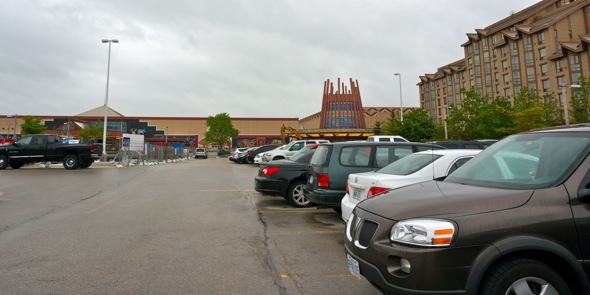 We arrived at Casino Rama to a rainy parking lot. Hey, at least the parking's free. If downtown Toronto ever got their own Casino, I bet parking would cost more than the buffet dinner.

We had about 45 minutes to kill before the show, so we walked around the casino complex, which I found really dark, except for the bright lights of the slot machines. It was pretty depressing, watching all these old ladies gambling away their pensions. Perhaps unique to Casino Rama, they've got a children's card game WAR that you can bet on and win (or lose) big! 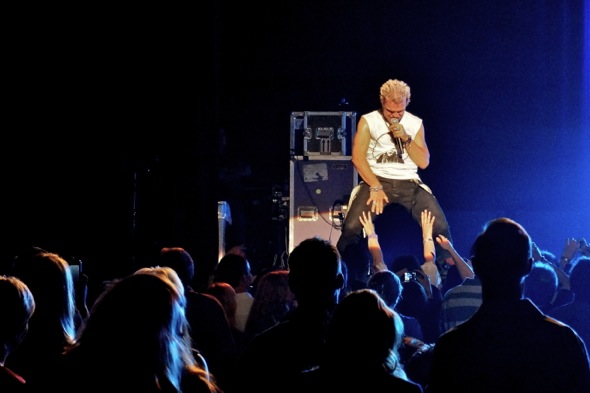 By 8 o'clock it was showtime! Unlike most Toronto gigs I've been to, where there's a local supporting act, at Rama they get right down to business. We had 14th-row floor seats and everyone around us seemed older than us, making me wonder if they make a habit of comping casino regulars with free show tickets.

The front few rows appeared to be made up of Fan Club members. A few lucky female fans had a great time caressing Billy Idol's upper thigh. Billy didn't seem to mind. Nor did the laid back security. Try this move in a Toronto gig and you're likely to be tossed out by a meathead bouncer. 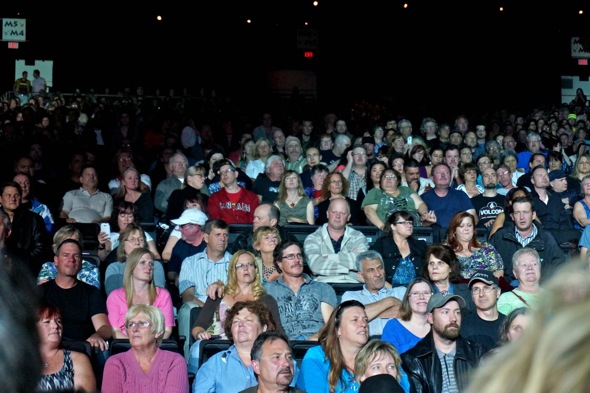 Behind us, though, was another story: Bored-looking couples in their 50s and gaggles of Soccer Moms, sitting on their hands during the performance. 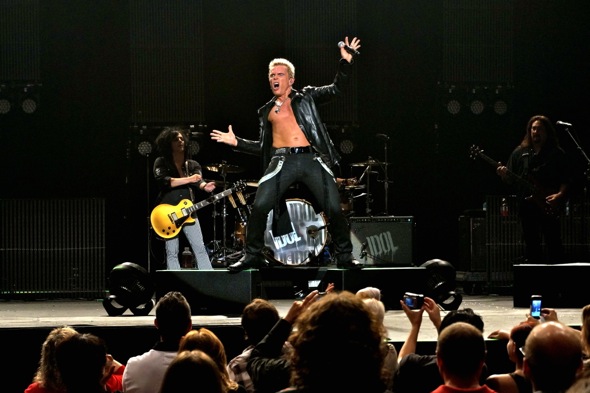 Billy Idol was animated throughout his show, playing a few newer songs alongside big hits that at least got some of the crowd on their feet. 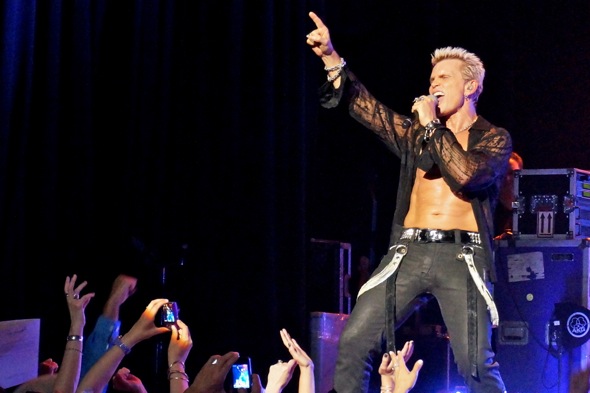 Hearing White Wedding and Mony Mony live were definite highlights of the trip. He did an amusing cover of The Doors' L.A. Woman, altering the lyrics to Ontario Woman. I almost missed hearing the usual call out of "Toronto, how do you feeeeeeeel?" 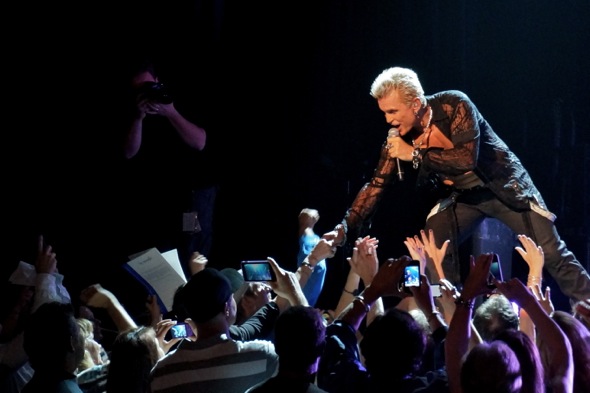 At 57, Billy Idol's still a class act. Full of bravado, fist pumps and handshakes to the faithful fans in the front rows. He even had a giant Sharpie on stage with him to sign autographs while singing. 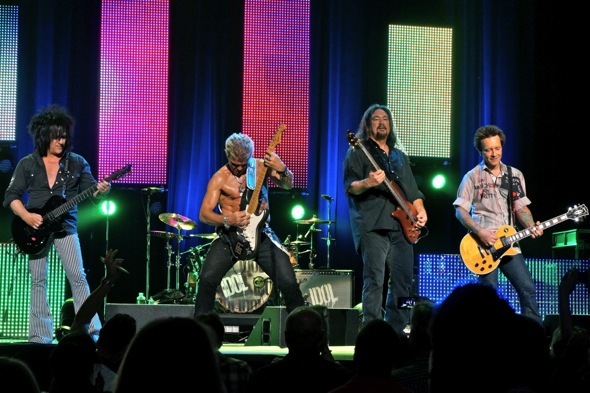 Altogether, I'd say it was a welcome departure from the Toronto concert experience and definitely a memorable trip to Casino Rama. Maybe you'd consider checking out a show there next month if you're a fan of Alice Cooper, Whitesnake, Collective Soul, Third Eye Blind or Journey.