The Rolling Stones defy their age at the ACC

Entering the cozy confines of the Air Canada Centre on Saturday night, it was difficult not to be taken aback by the sheer scale of the Rolling Stones' stage setup. The band's iconic hot lips logo was serving as the basis for the backdrop of a custom stage, encapsulating a video screen and extending out into the arena to create a circular standing area, or "tongue pit". It was both visually striking, dominating overheard pre-show discussions, and distinctly utilitarian, as it allowed Mick Jagger to run out to into the crowd and strut his stuff as only one of the greatest frontmen in rock can do. Shaking, flailing and wailing - all in a day's work for Jagger, even in advanced age (he's 70 in July). 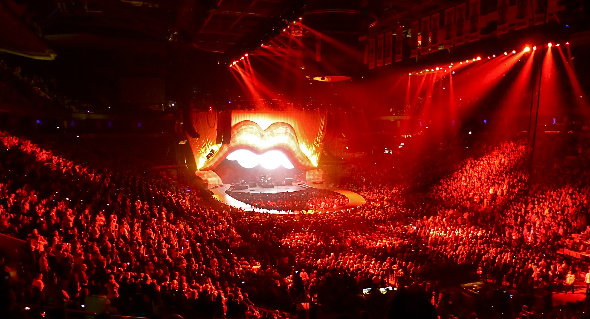 But there's little to say about the Rolling Stones in 2013 that hasn't been said countless times before. Even amongst the portion of the crowd that paid a whopping $624.50 for tickets, the "and Counting..." part of the tour's name may have been a bit of a misnomer. For most of Saturday's crowd, the Stones exist as a skintight nostalgia act, albeit one with some of the greatest rock songs of all time in their far-reaching back catalog.

Still, the beer/bathroom breaks during two new songs from last year's GRRR! compilation is testament to the predictable songwriting template that Jagger and Keith Richards seem to work within these days. Aside from those and a needless performance of "You Got Me Rocking" early on, anything recorded post-1981 was neglected entirely. Perhaps the tour should've been called "19 and Stunted," you may be thinking.

But here's the thing - no one cared.

Everybody who has any interest in the Stones already knows that they'll never stop being great at what keeps the Rolling Stones name brand going. They'll continuously and dependably keep deploying a steady stream of material from the first two decades of the band's existence, and they'll perpetually look the part of the archetypal garage rock band throughout. They all appear the grizzled vets they are, but here even Richards is surprisingly spry, seeming almost baffled by the rapturous applause directed at him upon leading the band through "You Got the Silver" and "Happy" midset. Both were ramshackle but excellent, serving as great reminders of Richards' strengths as an understated songwriter.

Supporting players took some weight off team Stones, most notably backing singer Lisa Fischer's stellar take on Merry Clayton's "Gimme Shelter" vocal. The subsequent "Angie" felt mechanical, especially when Jagger was unable to nail the high notes on the chorus. Weirdness abounded when "Street Fighting Man" was announced as winning an online vote-to-play - would they really have omitted it otherwise? - and presented onscreen with font that looked as if it had been picked straight out of Big Buck Hunter.

The projected visuals, when not of the band itself, often consisted of hokey animations of dice, tongues, and women. They seemed to be at odds with the Stones' reputation as effortlessly cool, and at times came off as being done without any sense of aesthetics whatsoever. 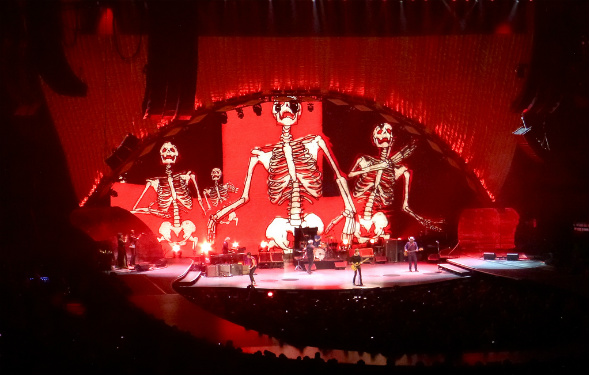 Taken in context with the hefty price tag, it was hard not to feel some cognitive dissonance with regards to the show's staging. But there were definite highlights, and they were quite plentiful throughout the set. Mick Taylor, the most melodic guitar player the Stones ever had in their ranks, joined the band for an extended run on Let It Bleed's "Midnight Rambler" - this being his first tour with the band since departing in 1973. And as much as I expected the Carrie Underwood duet to be dead on arrival, she actually provided a vocally impressive foil to Jagger during "It's Only Rock 'n' Roll (But I Like It)". Odd choice, and while I've never personally been a fan, she held her own. 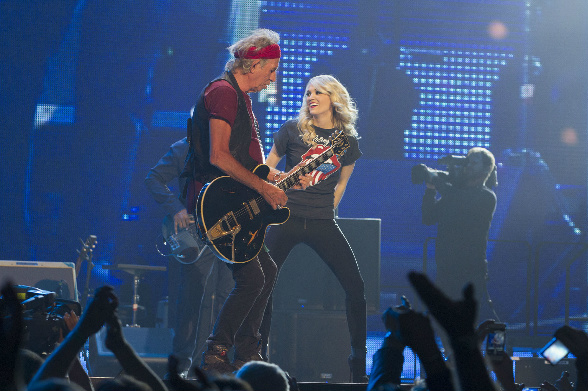 Ultimately, even if there were gripes to be had with the show - the gaudy visuals, a slight autopilot feel throughout, the underutilizing of Mick Taylor - there was still the fact that the Rolling Stones were energetically and competently playing the classics in front of you. Whether it was the slinky faux-disco of "Emotional Rescue" or the hit parade that made up the encore, the band were surprisingly on point, with Jagger rarely letting melodic focus slip out of his grasp. Two and a half hours later, everyone had gotten their fix, and left satisfied. Other than the requisite Rob Ford joke, no surprises were needed.

Photos by gbalogh on Flickr / Richards/Underwood photo by J. Bouquet