The Toronto Island has had a long history of music festivals, from Toronto's first Love Ins with the Mariposa folk Festival in the late 60s to most recently Virgin Music Fest in 2009, but the island's been relatively quiet since. By some strokes of luck and organization, Electric Island was born as a four part summer music series, perhaps dreamt up by the city's tourism board, to compete with Montreal's Picnic Electronique?

Regardless, Platform events has stepped up to the plate along with Embrace, and Footwork night club to bring Toronto's techno-heads a Victoria day to remember with a handful of locals and the larger than life Seth Troxler. Platform's Jeremy K is here to tell us all about it.

Tell me a bit about Platform.

We've been doing events since 2006. Our first was with Adam Beyer at 99 Sudbury on Halloween. We've been ramping up our shows every year, and it seems to be every weekend now. Our original goals was to bring bigger acts to the city and create a platform for local up and coming DJs to get in front of a bigger audience, and I think that we've achieved that. Electric Island is a vision we've had for a while, and the evolution of that original Platform dream because this is a really big stage that people are going to get in front of. Also, we will never repeat any DJs on the line-ups so it will give lots of opportunity for locals.

How did Electric Island come about?

Platform has done an event on this weekend for the last five years and this year we were looking at other options that were available to us. Last year we did the WKD Beach party at Sugar Beach, we do annual community events at Cherry Beach and we also do an annual Bohemian Yacht Club cruise party in Miami during the WMC. This year, we're working with Embrace and Footwork nightclub to bring it together. Embrace has worked with the city through shows at Fort York, also affiliated with the city, so we decided to jump on the island to do something different this time.

The Toronto Island hasn't been used for events like this since the Virgin Music Festival in 2009. How did this become available?

I'm not sure why the city was open to us doing it on the island. I know the city doesn't like people to use other parks due to noise complaints, and some sites on the island aren't available because the noise could affect the new condo developments, but the Olympic Island site is a little further away, and it's really set up for events. They have things like onsite washrooms there even. We're smaller than the Virgin Fest but we'll have a licensed area. People are welcome to bring blankets and chill on other parts of the park. Some people were talking about bringing badminton gear even to play and that's totally cool by us, although since we're licensed, you can't bring in any outside drinks. But we do want people to come out and enjoy the parks and the island. 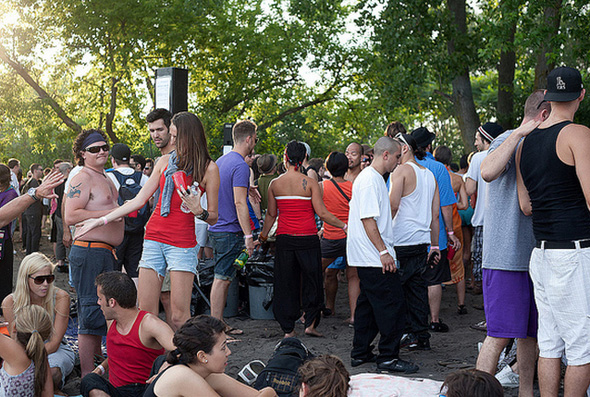 I see you have a tasty menu set up for the event.

Yeah, Sliced (650 Bay St.) is going to do the food. The menu looks amazing with a wide variety of stuff from sirloin burgers ($7.00), fish tacos ($8.00), fries ($4.00), to watermelon wedges ($2.00) and handmade fruit popsicles ($3). Their food is all fresh and local, and at the end of the day their food is donated to the Daily Bread food bank. They're going to bring a grill to make things more like a picnic. People have been asking if they can bring food, and we're not saying no, but it's not necessary for people to bring their own.

Tell us about the Electric Island Series.

We're doing this for the love of it and it's grown more organically than past events, now that it's an official event. I think that the passion will translate over, although we don't have as many acts as some other huge festivals, I don't think it matters. I think the vibe will be just as good or even better. We're trying to keep the cost low ($17.50) and make it accessible to everyone but still book some solid names. Since we're doing four of these, we definitely want people to come back and realize that we're making an effort to be sustainable.

So what will make the Island so electric on Monday?

Well we have a number of different visuals that we'll be installing. One artist present will be Christian SkjĂ¸dt; he's a VJ who will be doing a back projected visual once it gets dark. He'll be doing visuals behind the DJ for the last two hours. Lumatronic is a crew that does LED lighting for events like Harvest Festival, Alien Influx etc. They have an LED that's timed to the music. The whole place will really get electric and light up the whole park.

What kind of sound system will you be using?

We're really lucky that Sennheiser's come on board with Moog Audio and they've donated this brand new K-Array sound system with a new flat speaker technology. They look like they're from space and they're amazing. I saw them in Miami ant a venue called The Villa. I'm really happy that we can use it, it's also very easy to transport since they fold together and they do go up to 12,000 Watts of bass! We're so excited that they're loaning this to us.

How did you get Seth Troxler as a headliner?

He was our headliner for our first Bohemian Yacht Club cruise in Miami, and it was the same year they recorded that video of him with the boat hat on YouTube, hehe. He's definitely a character with a larger than life personality, and the best selection of music. Caller No. 7 is one of my favourite tracks. When you're booking a stage show, it's good to have a guy like that. It's really cool that he's kicking off two inaugural events in a row. We've also got Nitin (No. 19), My Favourite Robot (My Favourite Robot Records), Nathan Barato (Roots and Wings), Jonathan Rosa (Hot Fingers), and a special guest that we can't announce yet.

Can you drop any hints?

Nope! But it will be announced later in the weekend.

Damn, ok. How do you feel about the growth in Toronto's techno scene?

It's bigger than it's ever been in the last decade. We're starting to see the thousands coming out that we had in the earlier Toronto rave scene. I think it's just going to get bigger. Electronic music has been turned into pop now. Whether that's good or bad, nobody knows. It depends on how it's operated and hopefully the heads of our city will keep making it better rather than turning it into something we all hope it doesn't become, haha.

Photos by Jose and TesseractPhoto