For those of us who came of age with punk, the prog rock played by bands like Yes was big brother music, the first really interesting stuff you'd hear that your parents would never admit to liking, but something you'd jettison as soon as you put on your first Ramones t-shirt. That, coloured by prog's 'undeniable 70s heyday, meant that when Yes stopped into Massey Hall last night to play three of their classic albums from front to back, they were turning Toronto into a big, shag-carpeted rec room, and the beloved concert hall on Shuter Street into a pair of vintage Pioneer headphones.

The band began their show with Close To The Edge, the 1972 album that's considered their masterpiece, though only two of the five musicians on the stage - guitarist Steve Howe and bassist Chris Squire - actually played on the record. Drummer Alan White joined Yes after the album's release, while keyboardist and onetime Buggle Geoff Downes played with them for just a year in the early '80s before rejoining in 2011. 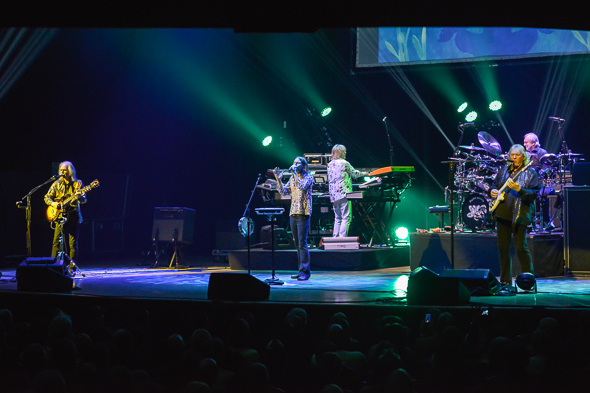 Most conspicuous by his absence was original vocalist Jon Anderson, who seems to have switched his on-again/off-again relationship with the band permanently off. His young replacement, American Jon Davison, just joined Yes last year, after doing time in, among other things, a Yes tribute act. It's hard to imagine Yes without Anderson's vocals, and if you were feeling uncharitable, you'd probably describe the band that took the stage at Massey Hall as the greatest Yes cover band ever. 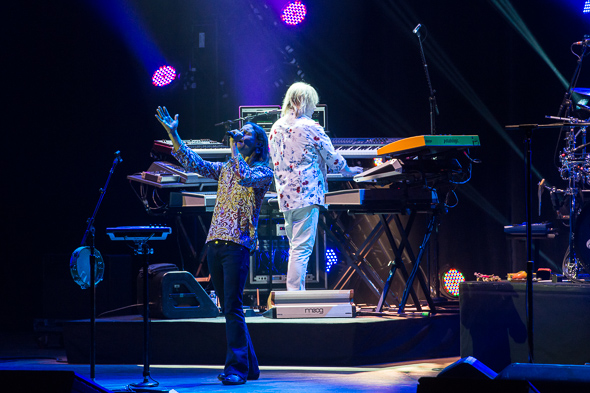 For the first few moments of Close To The Edge's four-part, 20-minute long title track, it was hard not to compare Davison to Anderson; his voice is reedier than Anderson's steely alto, a bit more falsetto (as any muso might tell you,) but he's clearly studied Anderson's vocals rigorously, and fans should probably be grateful that he'd be more likely to duplicate the sound of the original records than an aging singer bored with the idea of repeating something he did forty years ago. Plus his name is Jon, which has got to help.

Without a break, the band launched into Going For The One, the 1977 album that Yes released in the teeth of punk. Probably their last truly classic record, it's been unfairly overlooked, and I only owned my copy for about a year before the shamefaced prog purge I made of my record collection after seeing the Damned on TV late one night. I didn't notice until much later that the title track, with Steve Howe playing furious lap steel, is Yes doing rockabilly, though thanks to Howe's introduction to the track at Massey Hall, I learned that the song is about skiing, of all things. 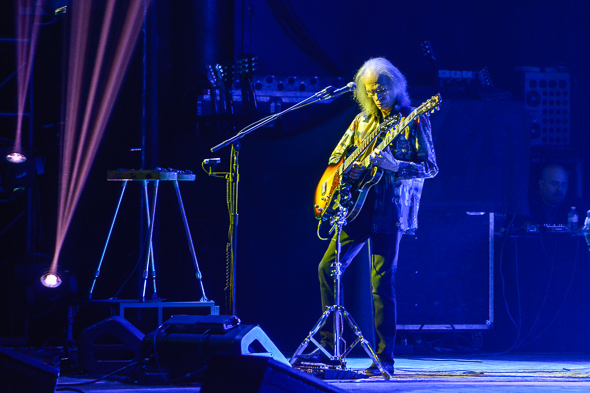 If any member of Yes embodied the prog spirit of unencumbered virtuosity it was guitarist Steve Howe, who played a whole family of stringed instruments during the show and seemed to have a new guitar for every song. It's hard not to see why the music of Yes and other bands was considered the enemy by punk bands, since they made the buy-in for a young musician, both in equipment and talent, seem daunting, even hopeless. When Chris Squire pulled out his triple-necked bass for "Awaken," however, it was easy to recall how punks like me would make fun of prog bands, with their flowing stage garb, arcane instruments and abstruse time signatures. Remember, though, that even Johnny Rotten would later admit that he never really hated Pink Floyd. 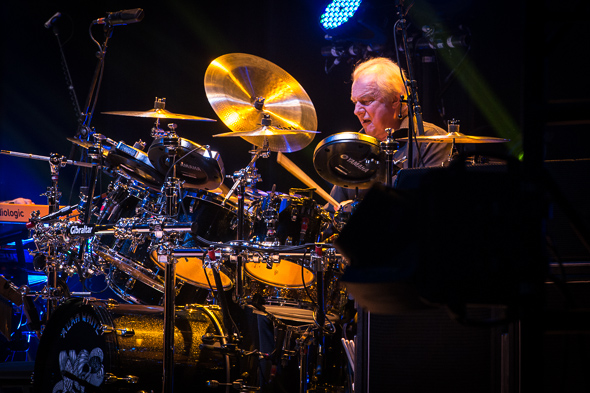 Looking over my shoulder as I researched the band before the show, my 9-year-old daughter said that everyone in the band looked like James May from Top Gear. At this point, they look a whole lot older; there were paunches aplenty onstage at Massey Hall, and no shortage of long, wispy hair over balding pates. The tragedy of bands of this vintage is that, sooner or later, they end up looking like their roadies used to. 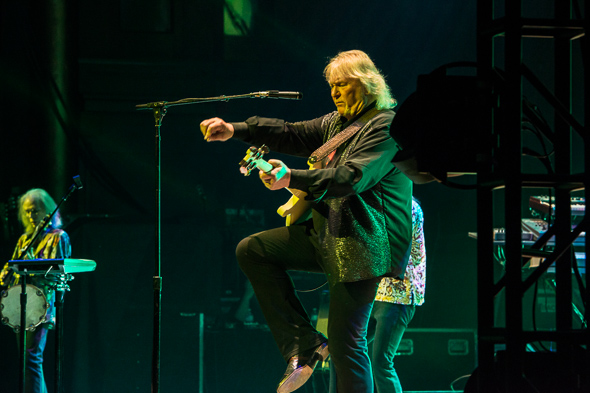 After an intermission, the band returned to play The Yes Album, the 1971 record that made their name on the FM and college radio scene - arguably the alt rock of its day. At their worst, they seemed a bit loose for a group of men who'd been playing together on and off for nearly five decades, seeming to let our memories of the song tighten up what was happening onstage. But at their best - on "Awaken," "Perpetual Change" and "Siberian Khatru" (after all these years I still have no idea what that means) - they were transporting, and the version of "Awaken" I heard last night was probably better than the album track. 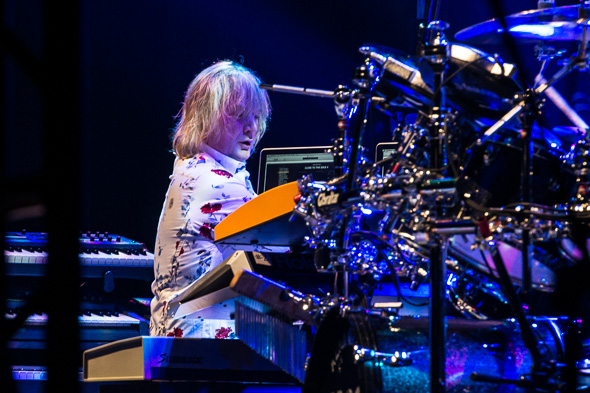 Prog isn't the pariah music it was when I bagged up my Yes records to sell at the local mall. Radiohead has proved that there's an audience for bands that are more than a bit pretentious, while newer acts like Animal Collective are bringing trippy, headphone-friendly music back to messy shared apartments and agonizingly hip teen bedrooms, and away from the audiophile vacuum tube sound systems and BMW car stereos where it migrated to along with its original audience. 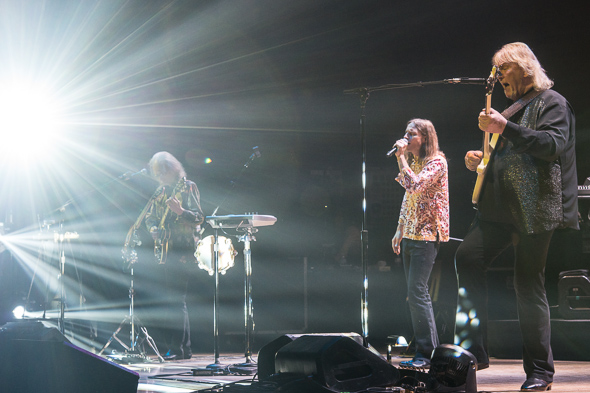 That audience was there in force last night, some of them a bit confused about what they were seeing: A few seats away from me, one fan seemed unaware that it was ex-Buggle Downes and not Rick Wakeman on keyboards, as he would bellow "Go, Rick!" and "Wake-MAN!" during Downes' feature spots. Ahead of me, however, a bearded twentysomething air-drummed wildly along with the show, barely able to stay in his seat for the packed out, three hour show. Called back for an encore, the band played - what else - "Roundabout," their biggest radio hit until the regrettable "Owner Of A Lonely Heart" in the '80s. Here's hoping that Yes don't return for an album-length tribute to that period of their career.