The art of concert posters is alive and well in Toronto

Last summer we interviewed the artist behind some of Toronto's most recognizable poster art: Tad Michalak of the popular Feast in the East series and DIY show promotion enterprise Burn Down the Capital. Michalak has designed posters for almost all of the shows he puts on in Toronto, and starting this weekend Toronto Laser Services will honour his work by displaying eight years of hand drawn and collaged posters.

Michalak names some of the myriad of influences for his weird and wonderful posters as comics, internet memes, movies, and Toronto screenprint artists Andrew Zukerman and Jesjit Gill. At Toronto Laser Services posters for Michalak's monthly Feast in the East events will be up, as well artwork from Burn Down the Capital's history of assorted, experimental leaning shows in the city including Stars Like Fleas, Nadja, Aids Wolf, Amen Dunes, Faust, Extra Life and Ty Segall. You'll be able to see a Torngat poster featuring Brian Taylor from Rotate This getting his beard cut, and work that for one reason or another never made it onto the street.

There's a story behind the Segall poster which is too good not to post verbatim. Michalak told us: "Probably one of the most memorable posters I have done was this Ty Segall poster of a dude vomiting, but the vomit is spraying not just out of his mouth, but his noise to. It's really disgusting.

Anyway, Ty got stuck at the border & they wouldn't believe that Sneaky Dee's was exempt, even though he had all the paperwork. After arguing with them on the phone for half an hour, they asked to see a copy of the poster. They wanted me to prove that I was presenting the show & not Sneaky Dee's. Anyway I faxed it to them, but it didn't go through, so I just kept faxing it until it went through. Apparently it had gone through the first time & the fax machine at the border just kept spitting out copies of this poster of this guy vomiting. Hahaha. They ended up getting across after that."

Sorry not sorry if you were eating while reading this. 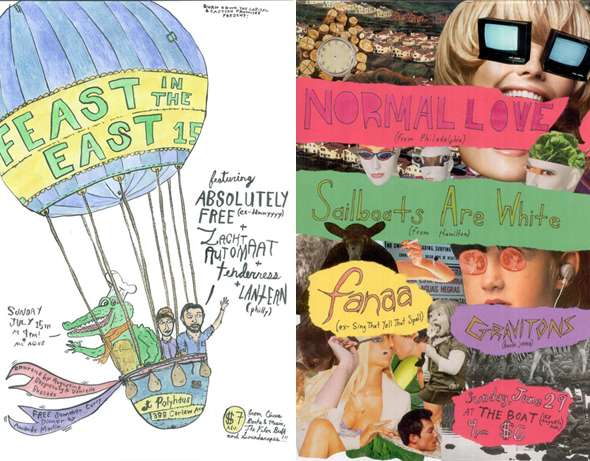 For aspiring poster artists or bands who aren't sure if they should bother hitting the street since digital promotion now dominates, Michalak claims that the internet hasn't harmed Toronto's vibrant poster art scene, or the power of a physical 11 x 17 or 8.5 x 11 beacon for a gig. He advises keeping clear of walls and city fixtures due to recent laws and overcrowding, and stick to coffee shops, record stores, and laundromats - anywhere where people have time to take a look. He also divulged the repetition of his posters, all being in a handcrafted style, has helped them become recognizable to fans, and catch the eyes of the curious.

The exhibit will kick off with (what else) a music show, with NYC avant jazz trio of drummer Weasel Walter (Lydia Lunch, Flying Luttenbachers, Behold The Acrtopus), guitarist Mary Halvorson (Anthoy Braxton, Marc Ribot) and trumpeter Peter Evans. Michalak, who also shows his writing chops writing one of a kind press write ups for each band he books, told us this: "Most of the music at the opening will occupy the realm between avant jazz and noise rock. [The trio] will be preforming a set of new music from their latest record. The songs will be structured with improvisation, loosely jazz based, but including elements of noise rock, metal, free improvisation, etc." 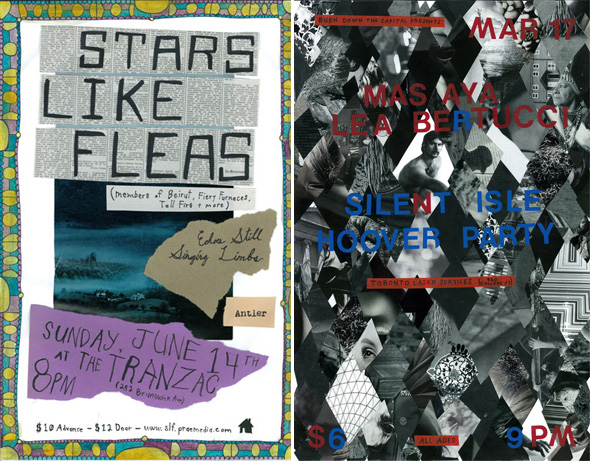 Locals Colin Fisher, Brandon Valdivia and cellist Nick Storring's I Have Eaten the City will be playing too - Michalak told us the first poster he ever designed was for an Eaten the City show - and the night with start off Gideon Steinberg and Brandon Lim's new prog/noise project Toronto Homicide Squad.

Toronto Laser Services is, according to Michalak, the only small run laser cutter downtown outside of the academic institutions. "It's pretty crazy, the stuff they make there. Essentially [they] can cut a plethora of different materials, papers, plastics, metal, wood, etc. and does so based on digital designs." 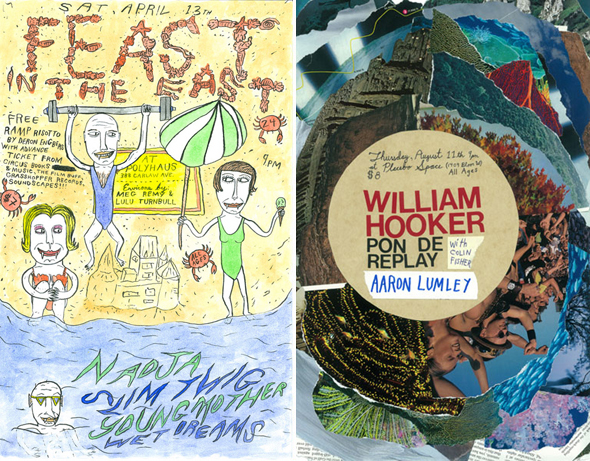 Still curious, we asked Michalak if the opening would feature any like, lasers: "The laser cutter has a laser, but it will be dormant during the show. If people want to bring lasers, consider this a BYOL. But people shouldn't bring tasers, no one wants to get tased."

Leave your tasers at home, kids.

The opening night show featuring Weasel Walter / Mary Halvorson / Peter Evans
is Sunday, April 28th at 9pm, and the event is all ages. The exhibit will be up until May 4th. Toronto Laser Services (960 College St.) is open 11am - 7pm Mon - Sat.