Green Day prove popular as ever at sold-out ACC show

Who knew that Green Day could sell out the Air Canada Centre in 2013? I didn't. Growing up listening to Dookie and first discovering the hidden track "All By Myself" was a rite of passage. It appears that this is still happening for 16-year-old girls in the suburbs and their parents (gotta have wheels) who turned out en masse on Thursday night to see the aging (yet ceaselessly energetic) pop punk rockers jam out for two and a half hours on a school night. 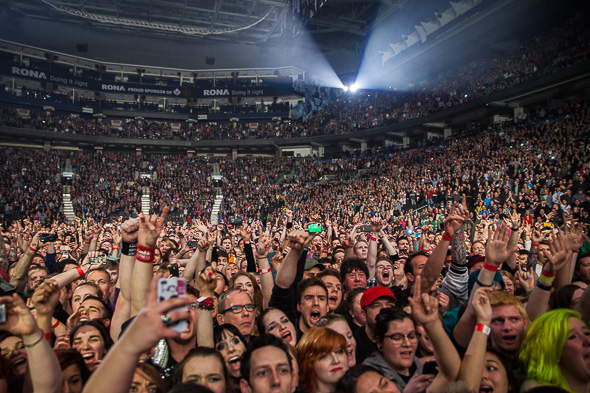 As much as you want to disparage Green Day for never breaking with the power chords and formulaic pop punk (totally fair), it's quite the accomplishment to be doing arena shows 25 years later. As far as railing against American capitalism -- albeit their albums are available at your closest Wal-Mart -- and taking quasi-stances against war there's plenty to discuss. And even writing about Green Day is going to usher in the lurking commenters to tear every detail of the band's career to shreds. Green Day, if nothing else, does a great job of polarizing people. Fans that grew up with Kerplunk, Dookie and Insomniac are very different fans than the American Idiot variety. 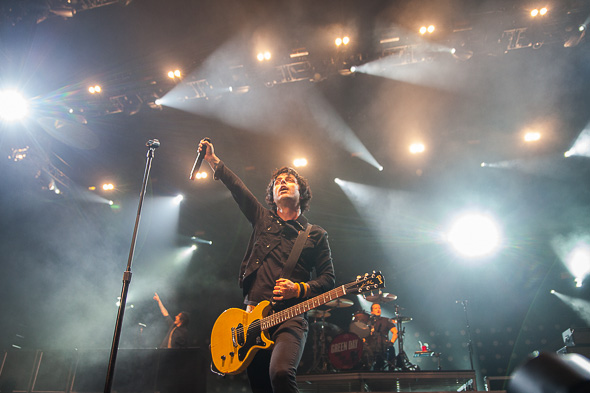 The aging die-hard fans from the early '90s are rubbing shoulders with green haired tweens toting Billy Talent T-shirts. Alongside parents, lots of parents. As for Billie Joe, that guy is a natural entertainer. Following his highly publicized, curse-injected tirade at some meaningless award show last September, Billy Joe went to rehab for substance abuse. The band -- who was then releasing the trio of albums, ¡Uno!, ¡Dos!, and ¡Tré!, which went largely (read: completely) unnoticed -- was forced to cancel their fall and winter touring schedule. In short, and oddly or maybe not that oddly, there are many parallels to the last season of Californication where an aging "coked up rockstar" is admitted for substance abuse and then tries to enlist Hank Moody to write a broadway musical, which Green Day has now successfully launched the Broadway adaptation of American Idiot. So there's that. 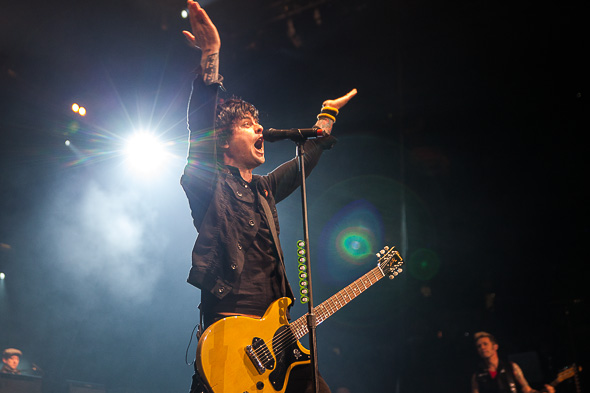 Nevertheless, here's what happens at a Green Day show in 2013. Loud music. Typical arena light show, nothing crazy or over-the-top. Ample number of fuck-filled tirades about being individuals and rocking out. Fans repeat whatever Billie Joe says or does almost religiously. He waves his hands, legions of fans wave their hands. He screams, they scream. Rinse and repeat. Billie Joe then proceeds to wear a pink boa, large Canadian flag as a cape, and black thong, all of which are offered up by the audience.

A seemingly endless amount of gimmicks to take away from the polish of the live performance. There's also a human-sized pink rabbit that appears near the end and proceeds to fall asleep along with the rest of the band as they do a medley of the Isley Brother's "Shout," the Stones' "(I Can't Get No) Satisfaction" and The Beatles' "Hey Jude." All the while the band is still laying down on the stage. 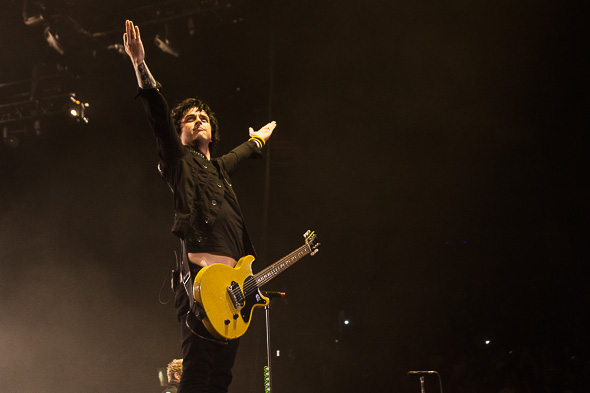 There was also a Viking hat involved. A toilet paper gun. A T-shirt gun. A power soaker to drench the front rows. And Billie Joe continued tradition inviting a kid on stage to sing the last verse of "Longview." And on that note, they played all the classic tunes, thank God. Everything from "Basket Case" to "Burnout" to "Geek Stink Breath" to "When I Come Around." The biggest cheers, again keeping the target demographic in mind, came with the newer, more repetitive mainstream fare of "Holiday," "Boulevard of Broken Dreams," a massive sing-along for "Jesus of Suburbia" and "American Idiot" during the encore. 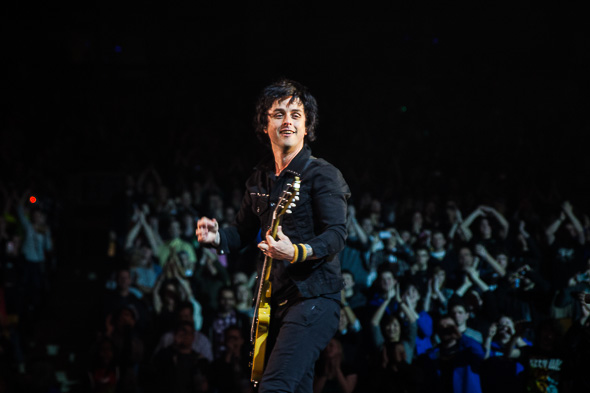 And there you have it, a Green Day show in 2013. Doesn't get me all hot and bothered, but Billie Joe made it pretty clear I'm no longer the target demographic. I haven't been for more than a decade. Instead he will infiltrate my life as an allegory in Californication. And that's perfectly fine with me. 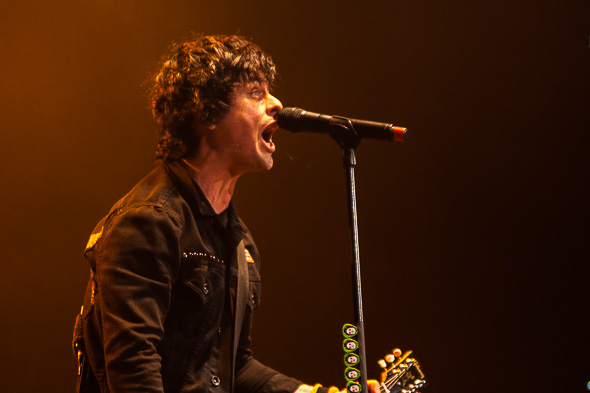 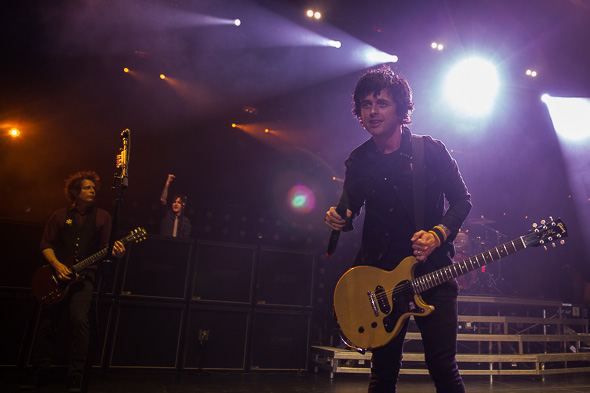 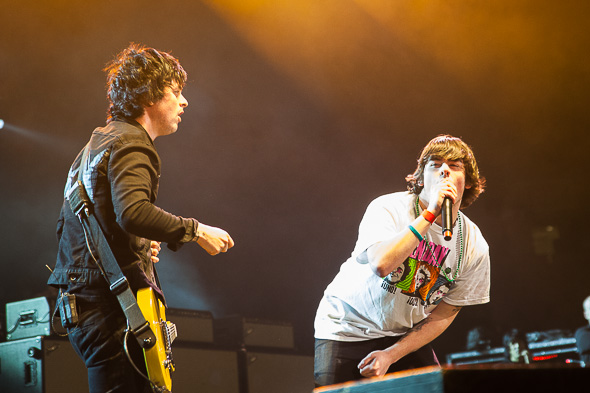 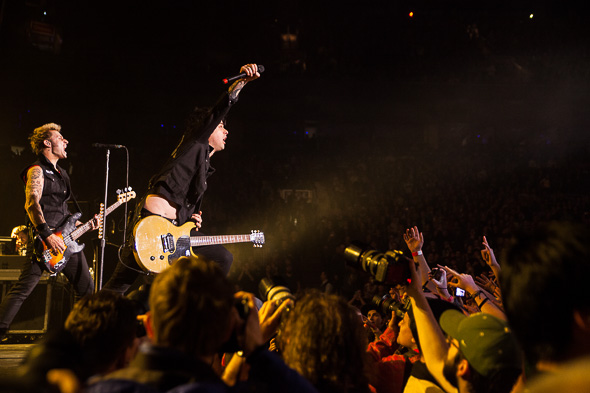