Along with cultural institutions like the ROM and the AGO, the TSO (Toronto Symphony Orchestra) is seeing a bit of a renaissance in the under 35 demographic with their TSOundcheck discounted tickets for as low as $7, but also with the New Creations Festival, a celebration of contemporary classical and new music. Their programming, for instance, will have a violin concerto composed by Owen Pallett of Final Fantasy. While it's too bad that he won't be part of the orchestra himself, soloist Pekka Kuusisto will be performing, and Owen will be DJing the after party in the Roy Thomson Hall Lobby on Thursday March 7.

Saturday saw resident Chicago Symphony composer and trip-hop DJ, Mason Bates/DJ Masonic perform his electronic infused energy symphony "Alternative Energy" where he assisted from within the orchestra pit with an M-Audio pad and laptop. It was incredibly refreshing speaking with someone whose passion for Debussy's arrangements matched his love for beats produced by Portishead or Squarepusher. I chatted with him about the festival and

So how does it feel to be part of the TSO's New Creations Festival?

This is my second time actually. I did a piece called "Liquid Interface" at the New Creations Festival a few years ago, which was a water symphony. I find this festival to be incredible. They bring huge symphonic pieces to Toronto, that on their own would be a big deal just by virtue of being played but they're doing three or four new pieces per concert. I think it's phenomenal, and the orchestra is incredible; the first rehearsal was dead on.

This is the kind of festival that I wish American orchestras would look to. You certainly have orchestras that play a great deal of New music like in San Francisco, but doing a festival of all new music is pretty incredible. It will not only benefit the field but the orchestra too. 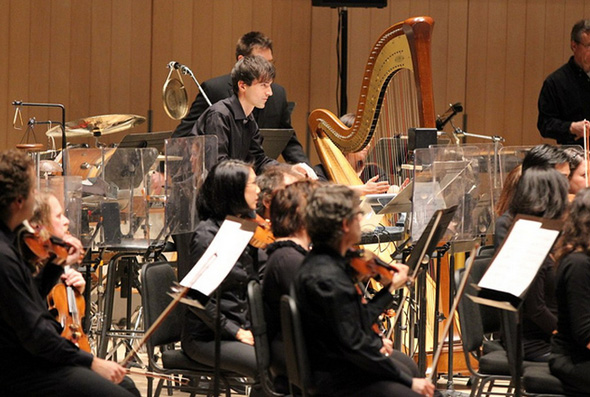 Toronto has been experiencing a trend where cultural hot spots like the ROM or AGO with their First Thursdays are trying to bring in a younger audience; do you feel this is a North American trend?

I think we're trying to do it, more at museums than at symphonies, but it is happening. I do a lot with the Chicago Symphony and we do Monday night series called Music Now where about 800 people show up to see contemporary classical music. I think one of the reasons it's become such a go-to event for people who are traditionally seen as an outside of symphonic audience is because the presentation and format is more imaginative. The program notes are all video, and we have trippy lighting with pre and post party DJing. I think it's happening a little bit, bit by bit. I'm of the belief that it can happen more but it has to be done the right way because you can't just throw a desperate party together and assume that people are going to come.

When did you start integrating electronic music into your symphonic music?

It was like parallel lives for a while where I'd be writing a piece for the Phoenix Symphony and then going out to San Francisco to spin a set of downtempo and abstract beats. I remember being at some of those dj gigs when youre there playing for three to four hours and you have time to think like, 'Why cant I have more symphonic sounds with this set, or vice versa, more electronica?' So I wrote a piece for the Los Angeles Philharmonic called "Omnivorous Furniture" which was my first electro-acoustic piece and since then I've written half acoustic, half electronic pieces.

What kind of gear do you use when you perform?

I keep the amount of gear I use when I perform pretty simple. When im actually making the sounds and designing the whole thing there's a lot more in the studio. But live, the main goal is to keep everything working together. At its simplest, I'll have the sounds locked into my M-Audio padded like percussion but when it gets more complex, there are some passages where I trigger stuff that rolls with the orchestra, and there's tempo warping, and stuff like that. But you have to be careful with that sort of thing because the orchestra is like an ocean liner. It doesn't really turn very quickly, so things like locking in beats is more complex than you'd think.

Your piece "Alternative Energy" is broken into four movements. Can you talk about them?

Debussy's "La Mer" was a water symphony from the 19th century, or Berlioz's "Symphonie Fantastique" was an opium-infused love story. I've always loved symphonic pieces that work on a narrative level because it takes you to a different space, psychologically in the concert hall.

"Alternative Energy" is an 'energy' symphony that travels through a huge variety of propulsive and mechanistic story elements from a down home blues level like a junk yard through to the present day with samples of actual energy facilities. And then an imaginative, almost indigenous space is created for the future. Each movement moves 100 years into the future.

The first movement has actual junkyard field recordings, and I actually got to go to the Fermilab to record. The next two movements take us to a near future China, and a post-apocalyptic Iceland that has become a hot island with just a few indigenous people running around. The idea is to tell the story symphonically, so you want to have awesome sounds and imaginative textures. I love to graft that to a narrative because ti allows for a wider emotional exploration.

You mentioned that you were at the Fermilab particle accelerator outside of Chicago. Can you tell me more about what it was like there?

It's a massive facility. It's so big that you can't ever see all of it. I went to record sounds of the accelerator that runs atoms in a four-mile loop.They drove me around and let me record parts of the machine, which became the sound source for that movement of the piece.

Was it hard to get clearance?

Yes, but when I told them I was from the Chicago Symphony, I got a reaction similar to a few years ago when I went to record at NASA. Scientists are generally partial to the arts. They are creative and imaginative types who love the arts and love to have their field included in it. So they said absolutely. It was borderline bizarre because they drove me around in these cars and everyone there had been briefed on the importance of helping me find these sounds, and they were all very helpful, but I figured they probably had more important things to do that day.

Was everyone wearing the white Hazmat suits?

There was a radioactive area, but they were like, "oh don't worry, it's on the other side of this wall" haha. It's wild because it kind of looks like 80s technology, all these old panels with patch cords. It achieves by brute force what it needs to do, compared to CERN in Switzerland which is much tighter and more compact. I think it was built in the 80s too, so it still has that retro vibe.

The next installment of the New Creations Festival takes place Thursday, March 7th and features Owen Pallett's Violin Concerto as inspired by the solo violin music of Bach.

Photos from the TSO's Flickr page and Josh Clavir