Major Lazer get hot and heavy at Sound Academy

Last night, Sound Academy hosted Diplo's Mad Decent dancehall collective Major Lazer playing to a sold out crowd of rabid fans in the latest episode of their 2013 Free the Universe world tour. The team absolutely blew the roof off with an explosive, unforgettable performance packed with new jams and timeless classics. 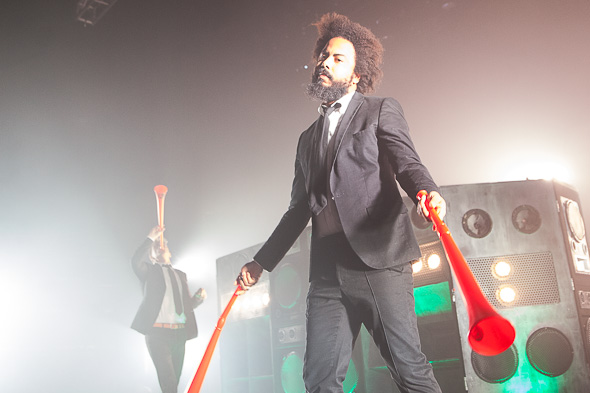 For the uninitiated: "Major Lazer is a fictional cartoon character, who fought as a Jamaican commando and lost both arms in a secret zombie war in 1984. He fights vampires and various monsters, parties hard, and has a rocket-powered hoverboard." (This show was every bit as crazy as that sounds.) 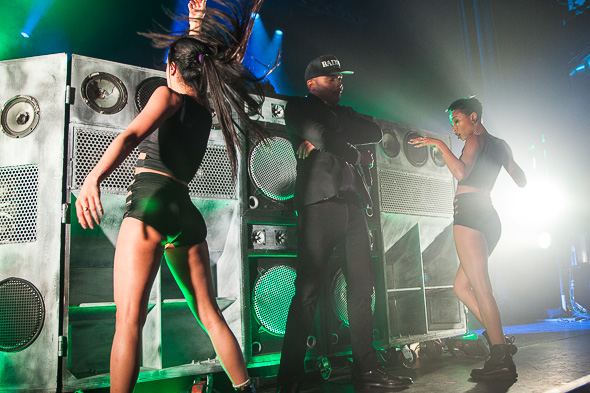 Making my way around the venue, I saw more than a few dancers dressed up from head to toe like the crew's namesake, complete with red berets and cardboard-and-duct-tape laser guns. Most ladies opted for signature hot pants, boots and bare midriffs, with the guys sporting tank tops and both genders rocking Major Lazer and Diplo-themed flat bill caps.

The set started out heavy and soulful with Kabaka Pyramid's "Ready Fi Di Road" warming up the crowd with the help of their enthusiastic dance pair and easing everyone into the mayhem that would shortly ensue. Right off the bat, Diplo climbed into an inflatable human hamster ball a la Flaming Lips frontman Wayne Coyne. Soon after that, Diplo commanded that clothes be discarded, with the team losing their shirts and the crowd following suit.

Soon after, confetti, streamers and vuvuzelas announced Major Lazer's hit "Original Don" which raised the vibe in the venue to a fever pitch, and continued with a special (attempted) filming of a "Harlem Shake" video (viral hit from fellow Mad Decent artist Baauer) though nobody in the crowd could stand still for the meme effect.

The mix continued with "Jah No Partial," Elvis Crespo's classic "Suavemente," Buju Banton, Gyptian's "Hold Yuh," Major Lazer's hit "Get Free," Damien Marley's anthem "Welcome to Jamrock," House of Pain's "Jump Around," and some throwback Beanie Man to round out the set list. All the classics were appreciated, and I loved hearing such a diverse set. Oh, and they slipped in some Nirvana just to show off. 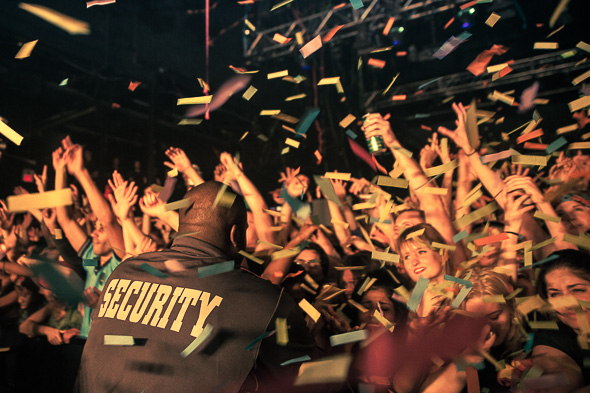 Now, dancehall is known for its overtly sexual accompanying moves and this show didn't stray from the standard. Diplo spiced things up for the (luckily) 19+ partiers by inviting stage-dancing girls to perform the signature inverted dance to Diplo's "Express Yourself," and plenty of girls came prepared for the task. All standard fare from the gentlemen that brought us "Major Lazer's Guide To Daggering." 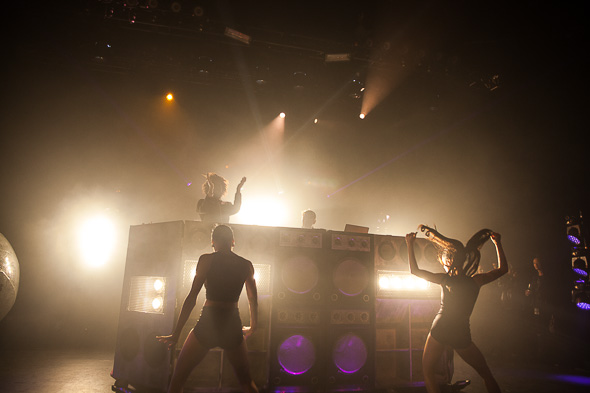 Short of a wet T-shirt contest, the action couldn't have been racier, and the crowd was all in. Later in the night, one lucky young man was invited on stage for a dancehall lapdance by the pro dance duo, leaving him drenched in water in nothing but his boxer shorts. Good times. 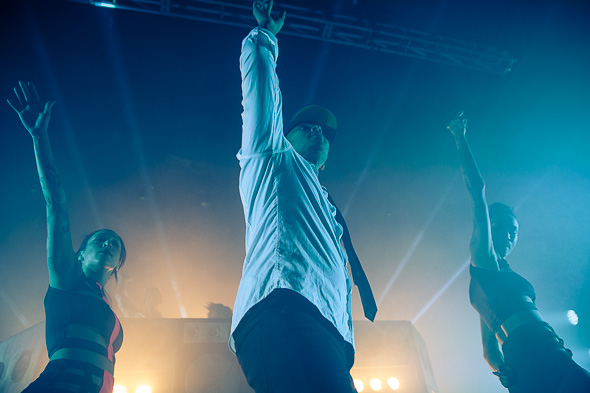