After having occupied the downstairs Black Box Theatre for a raucous Doldrums-led dance party the night prior, Wavelength brought the party upstairs into the main room of the Great Hall for the third night of Wavelength 13. There was a logical structure to the selection of the five bands on the bill, but it was tough to argue against the sheer amount diversity between them as being the evening's defining aspect. 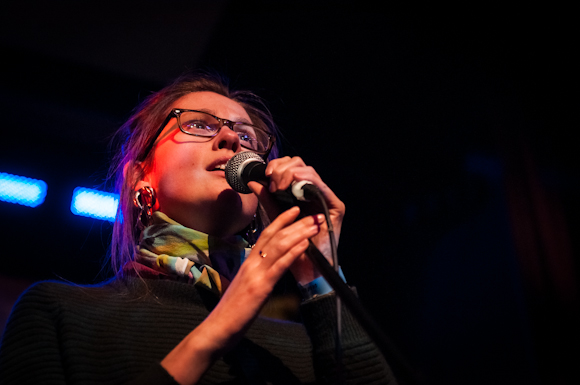 Understated r'n'b'ers Bernice, fronted by the enchanting Robin Dann, kicked the night off, but transit woes meant I unfortunately missed the majority of their all-too-short set.

Arriving in time for their last few songs, the band's atmospheric songs straddled the line between ambiance and allure perfectly, drawing you in with their intuitive pop sensibilities while somehow remaining elusive in the process. They've only currently got one album to their name, 2011's What Was That, but hopefully there's more on the way soon. 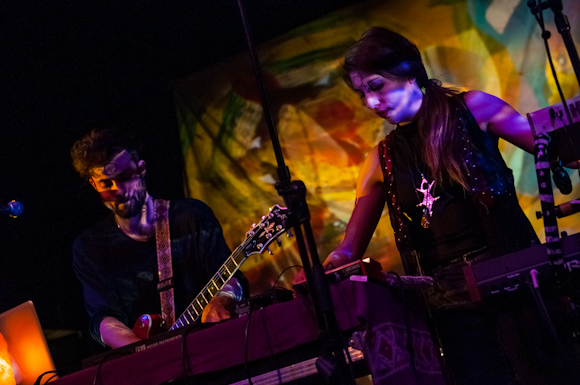 Doom Squad was on next. The band is made up of Montreal siblings Trevor, Jaclyn, and Allie Blumas, and while they created some interesting rhythmic soundscapes, the set began to drag slightly as their four or five songs proved particularly lengthy and offered little in the way of dynamics.

That said, they closed with one of the best covers I've heard in some time, a blissed-out, claustrophobic take on the Doors' "Riders on the Storm." Their formula of shared vocals and sparse electronic arrangements is one that I could see translating well in the studio; we'll find out when their debut LP Kallaboogie comes out this spring. 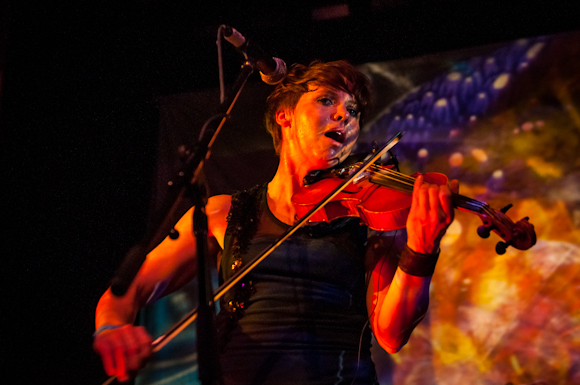 Up until this point, the vibe in the room was not dissimilar to your conventional rock club, albeit equipped with some hypnotizing projections and featuring the most enthused emceeing this side of late night television. The mood was celebratory and the crowd was talkative as a result, so one could be forgiven for wondering what would hold for Sarah Neufeld's set.

Known for her role as violinist in the Arcade Fire (maybe you've heard of them), the night's set found her previewing material from her upcoming debut album, which will consist of mostly solo violin compositions. 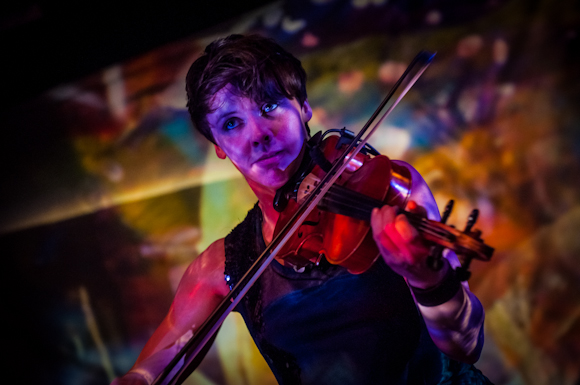 She seemed to be fairly far ahead in the game, as she shared the titles of each of her instrumental songs, most featuring an immediately distinct structure with no shortage of standout melodies. Joined near the end of her set by Geordie Gordon on keys and partner Colin Stetson on his trademark bass saxophone, their final song served as the highlight to the set, suggesting that, as captivating of a figure that Neufeld cuts on stage alone with her violin, her arrangements flourish in collaboration. 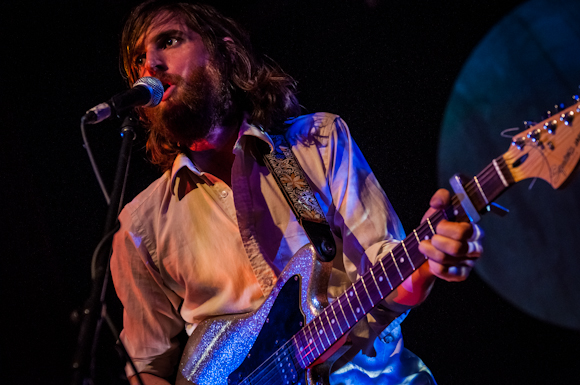 Appearing again in six-piece configuration as they had in August for their SummerWorks Spectral Dusk record release, Jonas Bonnetta's Evening Hymns were in fine form to hold the appreciative crowd's attention rapt. Despite the stateliness added by his tasteful backing band, the highlight of the set may well have been opening song "Arrows," here pared-down with only Bonnetta and bassist Sylvie Smith harmonizing over the former's spare electric guitar.

As had been the case for Neufeld's set, Evening Hymns were able to engross by nature of their subtlety - Spectral Dusk's slow, intense ruminations on the passing of Bonnetta's father juxtaposed against the comparatively jaunty songs from debut album Spirit Guides made for a set that benefitted from its changing mood. 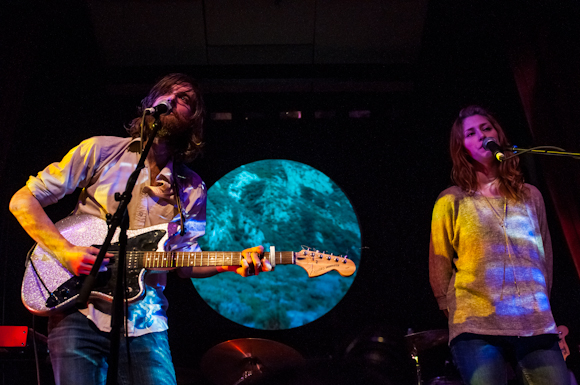 Bonnetta has grown into an affable yet intense frontman, despite the fact that their style of nuanced folk not necessarily implying engaged showmanship. During songs, he seemed to fully inhabit his speakers as he jabbed towards the microphone and rarely remained still. In addressing the audience, he took the time to offer some pretty hilarious stories of his winter up north, concluding with finding a particularly great parking spot on Queen Street earlier in the day upon his return to Toronto. Kudos, Jonas, it's a savage world out there and success begins with where you park the van!

It was getting late, but that didn't mean the Great Hall was emptying out. Palpable excitement was mounting for the night's headliners, Toronto's own Do Make Say Think, and deservedly so - the band have long stood at the forefront of what is often termed post-rock (which ostensibly only entails lengthy, jazzy songs borne by complex structures). Hitting the stage just after 1:00 as a five-piece, the band would stay in this (comparatively) lean formation for their exhaustive, near 90 minute set. 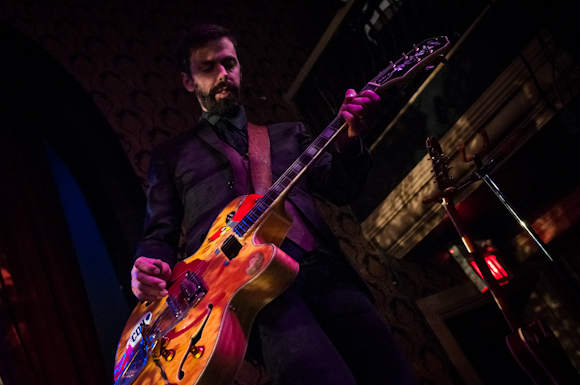 Ohad Benchetrit, Charles Spearin, and Justin Small alternated between guitar, bass, and keys, all the while anchored by the explosive duo of James Payment and David Mitchell on drums. Small, who headlined the first night of the festival as part of Lullabye Arkestra, was the de facto communiquĂŠ between the band and crowd, and it was hard not to be charmed when he offered some wise advice on prepping for a late night rock show: don't forget about the mid-afternoon rock and roll nap. 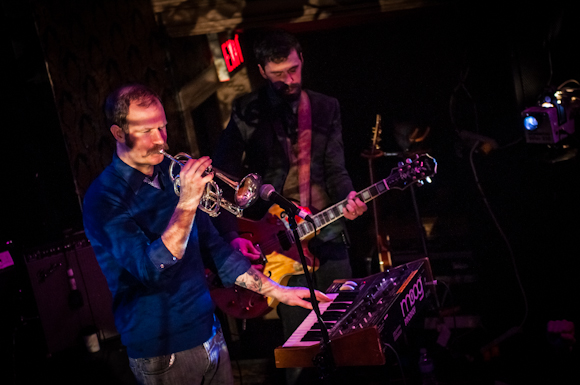 Do Make were relentless throughout as they ran through a comprehensive stretch of their material, airing out a fair share from earlier albums Goodbye Enemy Airship the Landlord is Dead and & Yet & Yet, while also including later fan favourites such as "Fredericia." Returning to the stage for an incendiary one-song encore of "Do" that took them past 2:30, one couldn't help but wish for some news on a new album - what would be their first since 2009's Other Truths. Even if that's a ways off, though, at least we've got one of our best local bands on semi-active duty, and here's to hoping they're not going anywhere. 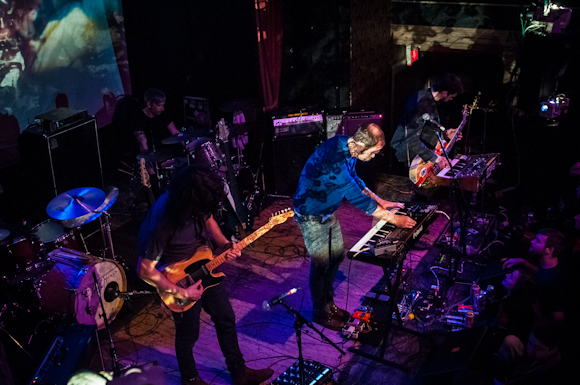 Wavelength 13 concludes tonight with two events. First, at 4pm, there's a free instore performance by the Soupcans and a talk by Sam Sutherland, author of the excellent Perfect Youth: The Birth of Canadian Punk, at Grasshopper Records (1167 Dundas St West). Afterwards, just down the street at the Garrison (1197 Dundas St West), there's one final blowout with Dusted, Cookie Duster, the Magic, Henri Faberge & the Adorables, and Legato Vipers. That's $13 and begins at 9pm.