Telephone Explosion Records on how to stay awesome

Now that the headaches have faded, it's back to work for Schouten and Sidoli. The label, who have put out LPs for Ty Sygall, Actual Water, and Anagram, will soon release Montreal / Halifax psychedelic grunge band CROSSS's debut, and will continue their new cassette-only series Ataraxia, which launched in 2012 with a release by Tonstartssbandht member Andy Boay.

Sidoli tells us Ataraxia is defined as "a state of freedom from emotional disturbance and anxiety; tranquility" and the series promises to take Telephone Explosion to whole new territory, while also linking them back to their roots in cassette culture.

Schouten and Sidoli show no sign of slowing down, so I caught up with them to pick their brains about the ins and outs of running an indie record label, Toronto's music scene, why vinyl rules, and what madness lurks behind those innocent faces.

2012 marked five years as a label for Telephone explosion - congrats! What are your fondest memories from those five years?

Jon Schouten [JS]: For me it was when I realized that Steve was the dude I wanted to do this with. I brought over some beer and proposed the idea that we partner on this label idea I had. Sometimes I forget how amazing the dynamic is between us and act like a dick. Sorry Steve.

Steve Sidoli [SS]: Wow, that was touching Jon. For me it was when the first "Lost In The Desert" LP basically sold out before we even had the records in hand. I figured we would be rolling in money very shortly. Then reality slapped me in the face. Hard.

At heart, what is Telephone Explosion's mandate? Have your priorities changed over time, or stayed the same?

JS: The mandate is to simply put out music we enjoy. We are both insanely active in terms of digging up new sounds, so naturally what we put out reflects our new / current interests.

SS: I think the basic premise has stayed the same, but we've made a conscious effort to open our doors to a wider array of bands/artists. We don't want to be viewed as a niche label anymore.

Do you have an office? What's it like there? How's the hood? We're in a snooping mood.

JS: Our office is both of our kitchen tables and a closet that the back catalogue calls home.

SS: I'm fortunate to have a day job that allows me to work from home. My office here doubles as my half of the TE headquarters. I haven't put any pictures on the walls since I moved here almost a year ago. There is a relatively large velvet painting of a dog right beside my desk. Attempting to figure out where it should hang gives me anxiety.

Some labels put out and (hopefully) promote records they dig, while others "sign" bands and do a lot of that general management type stuff for the artists. Where on this spectrum is Telephone Explosion?

JS: We're all about digging it. Over the last year we've really tried to become a little more serious and help bands with whatever we can. We both play music so we truly understand what it feels like for someone to step up and offer you some help.

SS: What Jon said (only with a strong Cajun accent.) 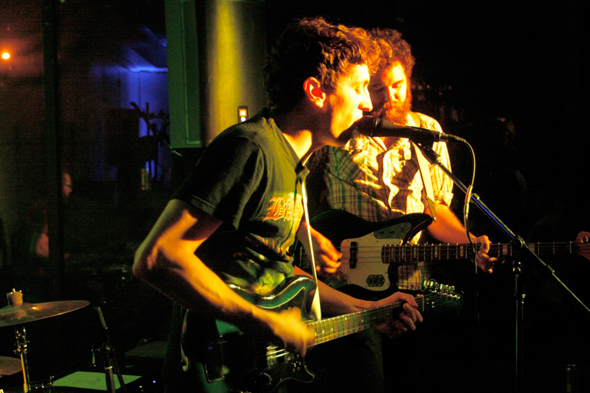 What are some of Telephone Explosions biggest inspirations? Artists, labels, personalities, foods...

JS: Anyone who has an idea and acts on it. Being lazy is shitty.

SS: I've found a lot of recent inspiration from the Fava Bean. It's bigger than most legumes and has a meaty texture/slightly bitter taste. Highly undervalued in western cuisine. Plus Hannibal Lecter digs it as a side dish.

You guys are both from Ottawa, right? What drew you to Toronto? Do you think you could have started Telephone Explosion in Ottawa?

JS: A very common misconception! I'm from Milton, ON.

SS: Jon and Chris Swimmings actually came up with "Telephone Explosion" as a name when they were both in Ottawa (Jon was visiting.) I'm not sure what the situation was, but I know we were sitting on steps in front of someone's apartment.

Ottawa's a nice place, but after 25+ years I needed to make a life change. It worked out for the best. The last time I was there, we tried to drink a couple of beers in Major's Hill Park. 10 minutes later, an armada of police SUV's suddenly surrounded us. They were shining crazy interceptor lights on us, and it was quite disturbing, to be honest. We got away with a warning.

What's the best thing about Toronto's current music community and music climate, and what would you like to see change this year?

JS: Oh man, this is gonna be a long one! "Just Shows" launching was huge. When Stillepost went down, Facebook events filled the show promotion gap. Nobody pays attention to those anymore, so JS has become essential.

The launch of "OFFERINGS" is super cool. We needed someone to promote all the "weirder" stuff that happens in the city, especially on a physical level.

SS: I'd like to see more all-ages shows. I know it's probably not financially feasible in most situations, but it would be awesome. When I was growing up, there were a lot of punk/hardcore shows that catered to a mostly teenage audience. It ruled, for the most part.

Every once in a while there would be an experimental/avant-garde concert that was all-ages as well. I always tried to make it out to those. It helped broaden my perspective in a lot of ways. It's important to make that experience accessible to teenagers. 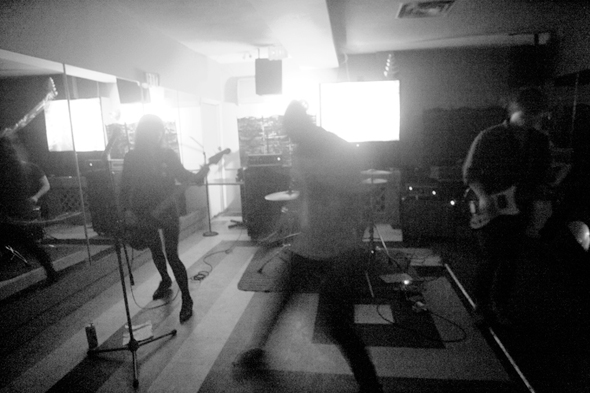 Tell us about your own musical projects - what are they, how long have you been playing, and why are they awesome?

JS: Teenanger and other stuff.

SS: Teenanger is basically it for me. I've played in a lot of bands over the years though. The best was "Frodo," followed by "Gay As The Day Is Long." Both of them were surprisingly earnest and serious.

Let's be cliche and talk vinyl. In a time where everyone I know is down-sizing and moving across the city, country, or world every few years, the best music is getting put out on this heavy, cumbersome format, which seems counter-intuitive to the times. I feel compelled to sell off my records every time I move. What do you think about vinyl? Why isn't there something better? Should I just stop moving so much?

JS: There will never be a format better or even as good. You've heard all the audiophiles talk about the difference in sound and how awesome it is to look at/hold a record. Right now, vinyl is really the only relevant physical music format.

People love to buy shit and you don't get that same fix with ITunes. Of course moving records sucks, but it forces you to downsize your collection to the essentials, and that's a great thing!

SS: The last time Teenanger went on tour, we spent almost every night at a different person's house, listening to music in their living rooms. The only time it wasn't on vinyl was in Raleigh, and the guy we were staying with smoked a legal version of cannabis known as "Potpourri." Enough said.

Speaking of retro formats, I'm excited about the cassette-only ATARAXIA series you have in the works - it seems like the medium will allow you to work with some really out there artists. What are your plans for the series, and what have you released so far?

SS: I'm really going to place a lot of emphasis on art for this series. I want all the volumes to look amazing and unique.

Any advice for new bands and or labels, and anyone who wants to start one or both of those crazy things?

SS: Make sure you are prepared to do a lot of work. In order to succeed, the label needs to take up a large portion of your daily life. You will get out of it what you put into it, and likely encounter some failures and disappointments along the way. Any success you do achieve will be more than enough to balance these out.

What's coming up for Telephone Explosion in 2013?

JS: CROSSS "Obsidian Spectre" LP, Ataraxia II: Daryl Mahoney (as mentioned above) and a bunch of other stuff. We're pretty hand-to-mouth, so buy our records and we'll put more out!

SS: I would like to find a nice coffee table for my living room. The one we have now is far too big, and I constantly scrape my knee against it.

SS: Currently a tie between S.H.I.T. and Kremlin.

Favourite place for a caffeine fix?

Most anticipated record of 2013?

Best find you've ever had in a Toronto record shop?

SS: I once found a valid TTC metropass just outside Soundscapes. Does that count?

SS: Goodwill because VV has driven its prices way too high.

Person X from your fave out of town band is in TO and wants to hang RIGHT NOW. You'll meet them at:

JS: If I say my bed is that weird?

SS: Trinity Bellwoods in the spring/summer; in the fall/winter I'd take them for Pho or Ramen somewhere.