Bon Jovi's "Because We Can World Tour" kicked off earlier this week and stopped by the Air Canada Centre for a two night stand starting last night. It's the American rock band's 15th outing and marks the first time they're starting a tour before putting out new music. Their new disc, "What About Now," is out March 12.

Moment Factory - the team behind Madonna's #1 selling tour in 2012 - worked closely with the tour's production designer Doug "Spike" Brandt and the band to produce video content to animate the show. "The show is cutting edge and it's one of the most ambitious scenography (lighting, sound and set design) you'll ever see. There is a lot of movement and it really pushes boundaries," says producer Daniel Jean.

As the band celebrates its 30th anniversary, Jean says the tour will deliver the classics that fans love - including "You Give Love A Bad Name" - and juxtaposes them with state-of-the-art scenography, which consists of 42 columns moving in synch with the video content.

The band was hands-on and offered feedback directly. "Jon and the band don't like to be too literal. They like fresh ideas," says Jean. "Some songs are more than 20 years old, so they wanted to see (how they could be refreshed) with today's technology - but in a way that doesn't upstage the artist, but rather, magnifies them."

During an intense 13-week period, Moment Factory organized four video shoots in Montreal and the content includes a moody desert scene, a factory scene for "It's My Life", and a backdrop featuring a soldier for "Army of One," a song from the new album. The team also played with 3D optical illusions and effects.

Because the setlist will change each show - there's reportedly a pool of 50+ songs that the band will pick from - the Moment Factory content has to be adaptable. "The set allows infinite possibilities of looks." 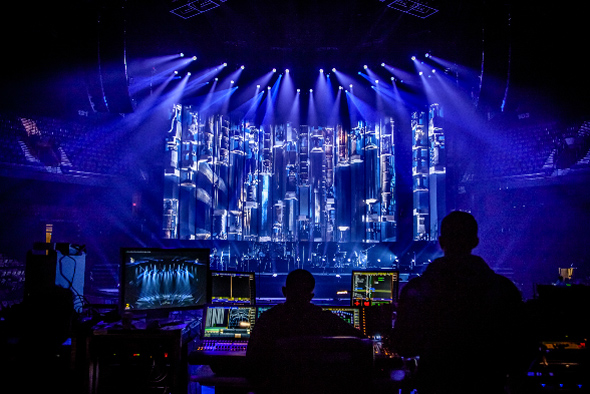 Since opening shop in 2001, the Montreal-based Moment Factory has made a name for itself internationally, working with veteran acts like Nine Inch Nails and Celine Dion, and today's superstars like Usher.

They're also the team who made it rain at last week's Grammys during Fun.'s scene-stealing performance of their hit "Carry On." Jean was working at the side of stage, watching the performance unfold. On his wish list of artists to work with next? U2 and The Rolling Stones.

As live performances evolve, the use of technology will only become more sophisticated in its mixture of technology and set architecture. Crowd participation will also increase. "Now it's more simple to merge all the media together. So I think it's the use of these different elements and putting them together to make a more seamless show."

It's therefore essential to manage the risks. "To be innovative and to push the boundaries, you need to task some risks. But they need to be calculated risks. For example, there are a lot of backups in the Bon Jovi show. So if something goes wrong, we can modify the show on the spot."

The "Because We Can World Tour" dropped by Montreal on February 13 and 14. It was Jean's first time seeing a Bon Jovi concert live. "I liked the whole show. There are highs, there are lows. I liked when it's minimal but I also liked when there is the big video wall."