Castledrum Records are just setting their roots, but they might be in for one hell of a ride. While 2012 was a phenomenal year for indie electronic music in Canada, many artists and fans found homegrown labels scarce. Talent is key to a dynamic music scene, but infrastructure needs to keep up, or artists may find themselves floundering, or looking for a new home base.

Though Castledrum is a London, Ontario start-up, their recent compilation Castledrum Companions featured so many Toronto artists that my curiosity about what's been going on a few hours southwest of the city was piqued. Companions, a gathering of some of Canada's brightest up and coming fringe electronic artists, finds tracks by Toronto's Digits, High Park, Headaches, Doom Tickler, Man Made Hill, and bossFYTE.

It turns out Castledrum Records is a continuation of another London label, Hands. I chatted with label owner Rob Ross about the reason for the name change, what Castledrum is all about, London's struggling music scene, and Ross's own musical projects, Flora and itsagamble!. Ross also put together a heart-rate accelerating mix, which you can press play on right here:

How long has Castledrum been going, and what are your releases so far?

Rob Ross [RR]: Castledrum is just in its infancy. We changed the name from Hands this year due to another label with a similar name.

Hands was started in Edmonton and had a number of releases under its belt (including titles by Candyspilling, Eaux Neaux, Eros Myth and a compilation featuring Purity Ring, Headaches, Gobble Gobble and more) by the time we changed the name earlier this year. As of now Castledrum has one release: Castledrum Companions — a 21 track compilation of various artists, mostly from Ontario. The comp is a primer of things to come. 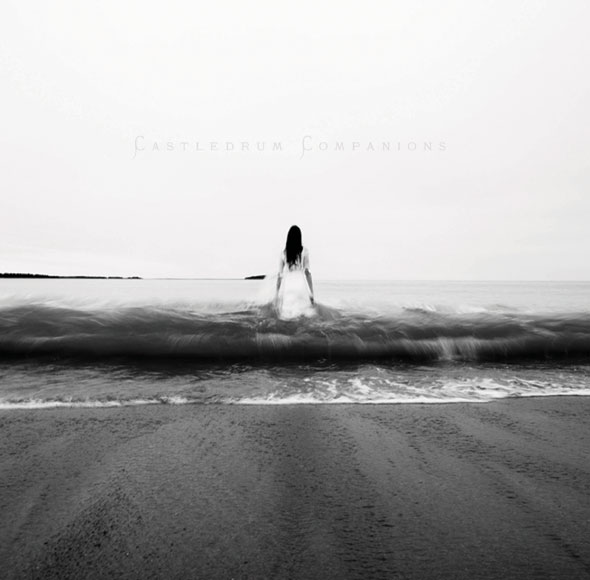 What releases have planned for the next year?

RR: So far on the release schedule we have albums from High Park, Live Action Fezz and itsagamble! There are more in the works.

Would you say there's a certain sound or genre you'll be focusing on with Castledrum? The compilation features a wide range of electronic artists, from dance to experimental.

RR: I don't want Castledrum to be pigeonholed in a certain genre. However I struggle with labels, such as Warp Records, that have an iconic history of pushing the boundaries of electronic music and in my opinion, have developed ADD. In the last few years Warp started releasing mediocre and sub-par post-rock and jazz fusion stuff and it's watered down their previously stellar back catalogue. Disappointing.

My focus is on artists that have an electronic-based production approach. I'm not all that interested in a label sound, but right now I see Castledrum heading toward the darker corners of the electronic spectrum. The next release will be Northern Hospitality from High Park, and it's a pretty dark affair. After that will be the new Live Action Fezz. Both artists use electronics as a base for their sound but come from very different camps: High Park being more dark/atmospheric while Fezz is still dark but will get some booties shaking — like, in that dimly lit corner of the club.

I'll say that even though there is no "Castledrum sound," I am drawn to those artists who glean emotion and narrative from tools and instruments that are often described as "cold." The emotional aspect of music is paramount to me. I'm very interested in the spaces where experimentation and emotional expression come together. 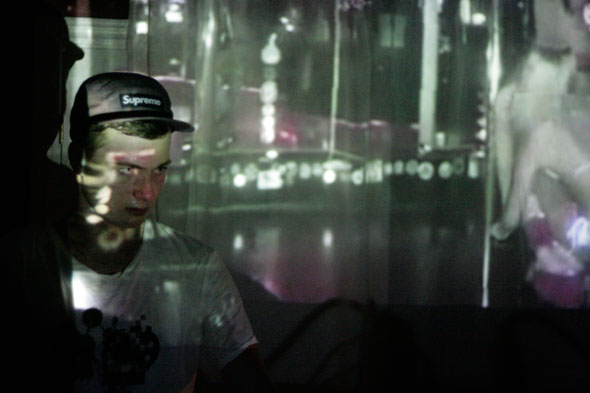 What formats will you be working with?

RR: All releases will have a physical and digital copy. So far we are looking at limited cassette and CD releases with a digital counterpart. Vinyl will be the next step.

You have an interesting back story in the Canadian music scene. Can you tell us a bit about your life before you settled in London?

RR: I grew up in Winnipeg and surrounded myself with music: I took saxophone and piano lessons, and played guitar, drums and synth. I was a massive fan of Michael Jackson, soul, and Motown growing up. I also lived in Thunder Bay for over a decade, and those people who have lived in TB know you need to make your own fun there. I was in a punk band with my brother, called Pasty White Thighs.

Later on I was really influenced by early Warp artists and was an avid Brave New Waves listener (I can still hear Patti Schmitt's voice in my head), and this piqued my interest in "non-traditional" instruments and sound generation. I started taking apart synthesizers and children's toys and recorded their death cries with a primitive four track recorders that I made. When I was going to school in New Brunswick I got into computer-generated sounds and melodies and loved the infinite possibilities that using that tool can bring.

My first EP as Flora was written in Alberta, while my wife and I lived in a mobile trailer in the middle of a field, during which time I was invited to play the Sound and Vision fest in Portland OR. We moved to Edmonton after three years of country life, where we lived in turn for three years: at that time Edmonton was an incubator of musical talent (see Purity Ring, Born Gold, Renny Wilson, Headaches etc), and a great place for sonic experimentation. Cecil Frena promoted my first Edmonton show. He was a scene builder, building momentum and giving space for people to perform. The scene was very supportive initially; however that seemed to wear down as people left the city - though I hear that Joe Gurba (The Joe/Help) and the Old Ugly crew have taken the Edmonton music scene to the next level now. After three years there we made the move to London, where we live and play now. 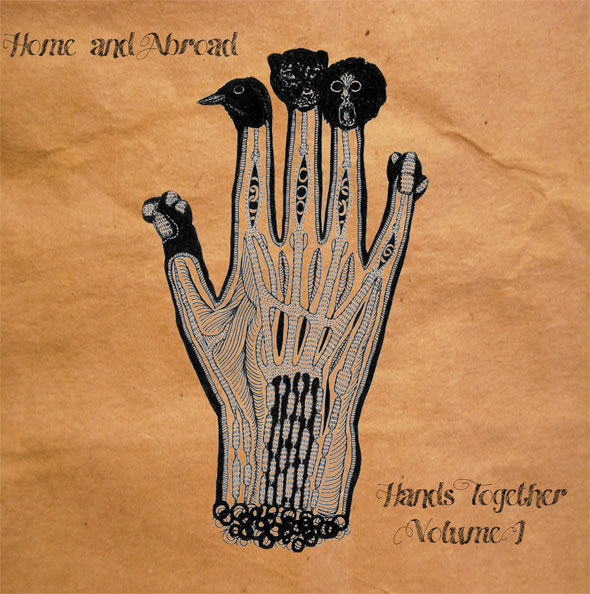 Can you talk about where the idea for Castledrum came from, and what inspired you to start a label?

RR: The name Castledrum was made up by my daughter. She used to talk about "Castledrum" being a magical place in the clouds full of music. I mean... really. Perfect name for the new label.

I wanted to start a little label as a launching pad for myself and others to use. So many great artists are hiding out in their home studio without a home for their material. Many people just throw stuff up on Bandcamp or Soundcloud without much fanfare. I am not the most "connected" person: we don't have distribution, we don't have strong media connections and we can't afford anything but limited physical releases; I see Castledrum as a labour of love and less of a proper label. I'm not a schmoozer, I don't "rub the elbows," I try not to play the scene game or be a part of the music industry or really care about trends. I just hear so much great and diverse electronic-based music, especially from Canada, and I want it to be heard by as many people as I can make possible. 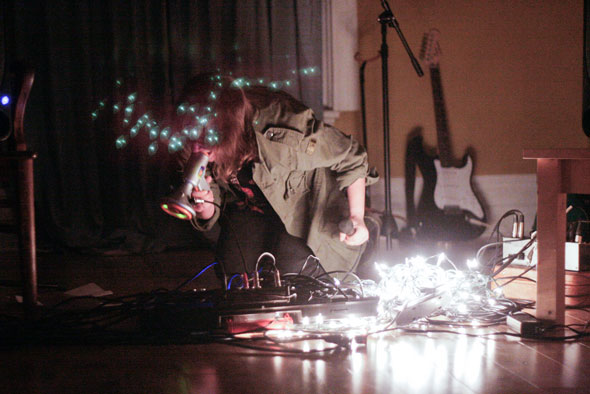 How do you find the artists on Castledrum?

RR:Usually someone tells me to check an artist out, mostly online.

You also act as a promoter in London sometimes, either hosting house shows or putting on events in venues: what's the scene in London like right now?

RR: Oh London. To tell you the truth, I've actually disconnected myself from the London scene as of late. London is insecure. I'm not sure if it's the Toronto effect: tower envy. For the most part the scene is pubescent — awkward, unsure of itself, wanting to fit in but not sure how — covered in zits. Talent-wise the scene is very strong and diverse. Artists like You'll Never Get to Heaven, I Smell Blood, Thesis Sahib, New Zebra Kid and EKM all prove that London's talent pool is deep and multi-disciplined, it's just unfortunate that many people miss out on seeing them perform. 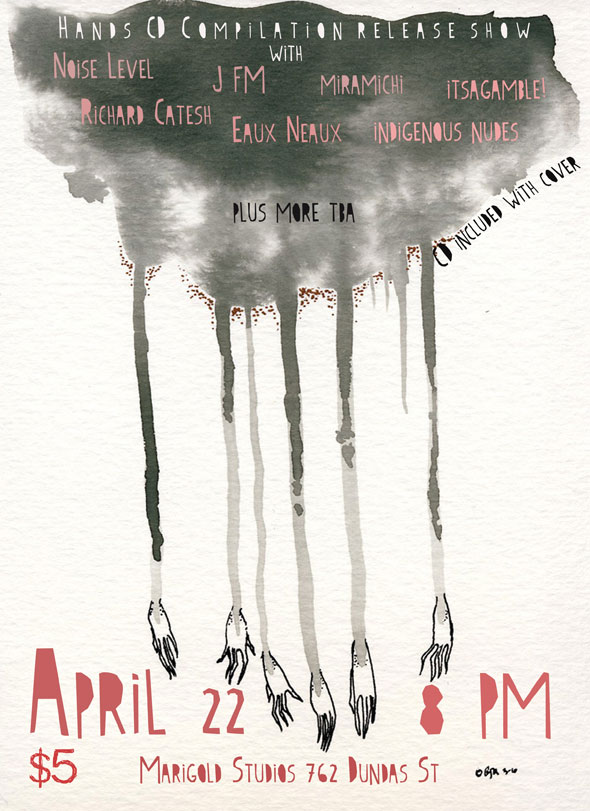 London is big enough to have great talent but small enough that the scene cliques and interpersonal issues dictate show attendance. My experience has been that many people will not take chances on artists that they have not heard about until media or certain tastemakers give their stamp of approval. This makes it difficult to promote acts in the city.

London has so much potential and the scene is growing. I just hope that we can take some more risks, get over ourselves, and reach the city's full creative potential. That all being said, I myself have been a recluse lately, focusing on my family, the label, and my own musical output.

Can you talk a bit about your own projects, itsagamble! and Flora?

RR: Flora started almost 10 years ago and is the more melodic, ambient side of my projects. itsgamble! was created to get away from Flora's pastoral serenity and toward more a more abrasive sound. As of now I am working on new material for both projects. There will likely be an itsagamble! release next year.

What are your kids' favorite Castledrum bands right now?

RR: No joke but both my kids love kid YEARS, who was featured on Castledrum Companions. I've also seen my son get down to one of the new Live Action Fez jams that will be released next year.

First album you ever bought: La Bamba Soundtrack on vinyl.

Watch the Castledrum Facebook (linked above) in the new year for new releases and announcements.