He could've played for the Dallas Mavericks, as well as a number of collegiate and professional sports teams, but they found crack in his jacket and marijuana in his socks. Despite these unfavourable circumstances, Jody Highroller's had one hell of a year. In 2012 alone, Riff Raff signed a deal with Diplo's Mad Decent record label, became the subject of Harmony Korine's Spring Breakers, in which he was portrayed by James Franco, released countless YouTube videos and independent albums, formed a group with Dirt Nasty and Andy Milonakis, and dropped more lower case i's on Twitter than Apple has advertised in the past decade.

Thanks to his unparalleled grind, always-in-character Andy Kaufman-esque performance art, and Andre Agassi get-ups circa 1989, the joker on MTV's From G's To Gents has quickly transformed himself into a bonafide internet rap icon. But could his return to Toronto live up to this summer's unforgettable debut at Wrongbar? That was the question fans paying to see him twice in one calendar year were asking themselves.

The always more-than-reliable ItsMattLangille got the night rolling with a refreshingly Dipset-heavy DJ set, as the crowd began pouring into The Hoxton. Toronto duo Thugli followed suit with their own brand of energetic trap refixes, causing 'bow-throwing masses to go particularly H.A.M. to French Montana's "Pop That," Juicy J's "Bandz A Make Her Dance," and Rick Ross's "B.M.F." 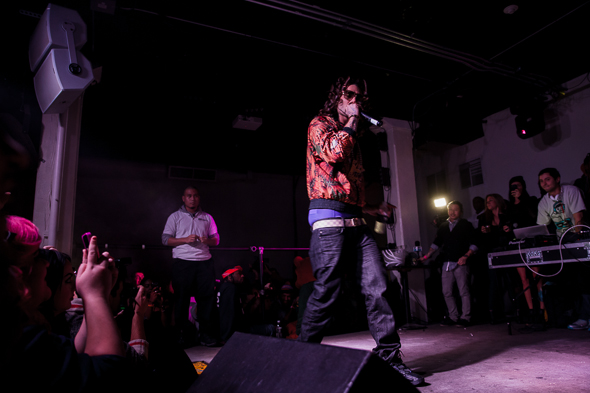 By the time 11:30pm rolled around, the house was packed. Riff Raff's DJ came out accompanied by a posse 30 people deep. The on-stage mob included PLD founder Matt Adam, TFHOUSE, a bunch of weed-smokers, some bearded dude, and a pack of girls straight out of How To Make It In America. The range of styles perfectly exemplified the main event's fanbase.

Five minutes later, Jody finally appeared out of the shadows. Rocking goldilocks, shades, his MTV's Riff Raff chain, and a fittingly inexplicable tiger jacket-sweater thing, Highroller naturally and unsurprisingly announced that he could have played for the Blue Jays. Rap game Wayne Gretzky then proceeded to give a half-coherent inspirational speech on haters, before going into "Terror Wrist." As soon as he finished performing the opening cut, toque girl treated his hair with some hair spray, as the crowd ate it up each of the three times this ritual went down. 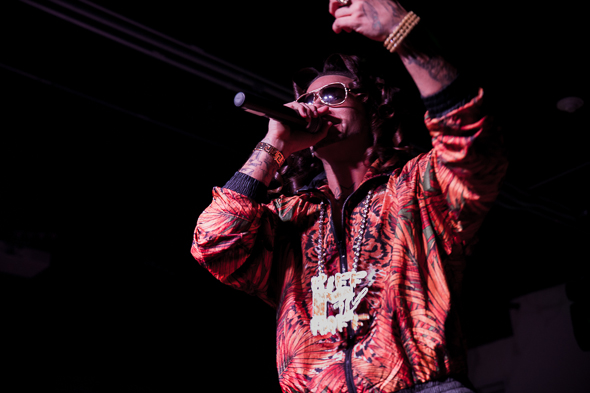 Riff Raff proudly announced a new song with Action Bronson, in addition to an upcoming album with New York producer Dame Grease, titled Hologram Panda. He also took five to shout out collaborator Chief Keef, happily letting fans go nuts to his instant classic "Love Sosa." This obviously segued into "Cuz My Gear," easily the highlight of the night, during which everyone used up all their energy, people got shoved left, right, and center, and glasses and shoes got mangled.

Unfortunately, after "Rap Game Sleepless In Seattle" and "They Figured I Worked For Mexico," Riff Raff simply peaced out without saying bye, and no one was really sure if the show was done or not. However, upon hearing a couple of Young Chop beats being played by Comeback Season Kids, the crowd realized Jody had left.

On the way out, fans were complaining about the short set length, the fact that he cut "Bird On A Wire" â arguably his best song â way too short, the absence of favourites like "Brain Freeze," "Time," and "Hot Shots Part Deux," and the feeling, at times, that he only came for the drugs and the women. In short, some understandably felt that the show was more about presence than performance.

While this outing certainly didn't live up to his first Toronto appearance in July. It was plain to see that most people had a ton of fun whenever Riff Raff was on stage. For 40 minutes, he treated the audience to sheer energy, hype, and comedy. In the end, isn't that what Jody Highroller's all about, anyway? Like his music, the concert put Riff's momentary strengths and retrospective weaknesses on full display, but either way, you know he doesn't really give a shit, as long as it was a party. And it was.