Neil Young and Crazy Horse go wild at the ACC

Neil Young and Crazy Horse have been collaborating since 1969 and their shows together have always been the stuff of bone-rattling, eardrum-bursting legend. Distinct from Neil Young's legacy as an acoustic troubadour, when he plays with Crazy Horse, Young transforms into a snarling guitar hero, stomping around the stage and playing an endless series of solos while the band vamps on a riff or two-chord change.

The minute the house lights came down at the ACC and I saw Crazy Horse drummer Ralph Molina had a pirate flag flying from his drum kit, I knew we were in for a real show. The stage was set with huge Fender speakers looming on either side of the drums and a gigantic microphone center stage. Stage-hands dressed in lab coats and orange construction vests scurried about, rolling props around and filming the band on big, anachronistic video cameras. 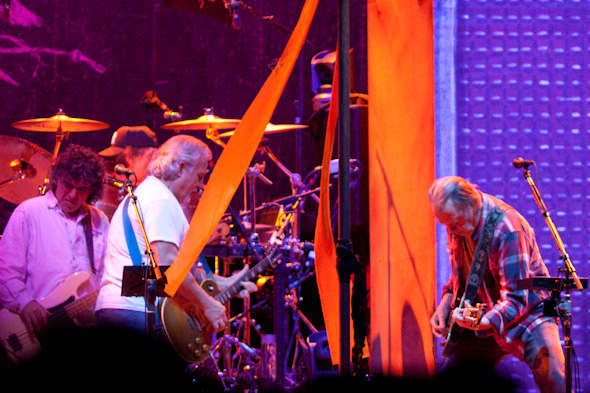 I was a little surprised by all of the stagecraft, actually. It all felt very big — grandiose and well-executed, for sure, but at odds with my expectations of Live-At-Massey-Hall-A-Man-Needs-A-Maid Neil Young.

But then, this wasn't troubadour Neil — this was rock star Neil.

The set was really well-chosen, going back and forth between old favorites and material from the band's new record, Psychedelic Pill. The new album is two discs but just eight tracks long, composed almost exclusively of long, wooly jams. Believe me, it's a monster. Probably the best of those tracks was '"Walk Like A Giant," a fuzzed-out mess that I found as much fun to watch as it seemed to be to play.

The new songs really played well against the hits, but their sheer length wore out a few of the fans, I think. I noticed a few people fading out during the second or third break where Crazy Horse just made noise and stomped around the stage, and I definitely heard a guy repeating the phrase "self-indulgent" over and over to his buddies on the way out.

I had expected to see a few fans get pissed off because he didn't play "Heart of Gold" or something equally beloved, but really, Neil Young just isn't the type to play a greatest-hits set — and with 37 studio albums, trying to do so would be an exercise in futility anyway. Frankly, for an artist with a body of work as wide as his, I don't think they could've done a better job. 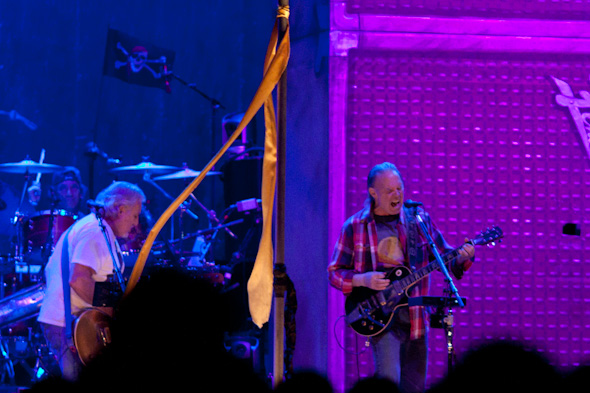 The one song I can't make up my mind about served as the encore — "Helpless." Crazy Horse's upbeat take provided a really stark contrast to the version I'm used to; on the other hand, I think the classic version is a lot stronger, letting Young's songwriting stand for itself without the band getting in the way.

Los Lobos played just before Crazy Horse took the stage; their Tex-Mex blues definitely played right to the tastes of the older members of the crowd, who started boogie-ing (who thought I'd ever get to type that) as soon as the band started playing. 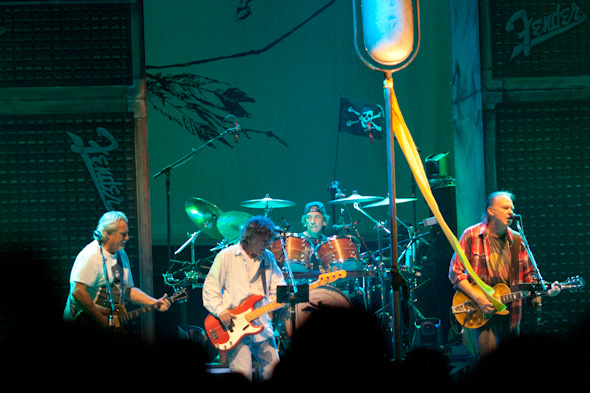 Toronto country group The Sadies opened the show with a crazy-short set that I unfortunately missed because it was so, well, crazy short. One of the best 'sideman' bands working in the country, they've played behind members of Blue Rodeo, as well as Andre Williams, and even Neil himself, and it's a real shame that myself, and probably most of the crowd, weren't there to catch them.

At this point Neil Young is less an artist than an institution. He's been active for so long, and has written so many classic records, that the fact that he can play a set and have it feel not just engaging, but genuinely surprising, really showcases that fact that he's among the greatest songwriters of our time.