Heavy music fans under 30 probably know Ian Blurton for C'Mon, the power trio he founded with Nashville Pussy bassist Katie Lynn Campbell, and which folded its tent last year after four albums and a slew of singles and EPs. Older folks will remember a less hirsute Blurton from his nearly sixteen years leading Change Of Heart, a mainstay of the city's Queen West music scene, whose career has just been anthologized with There You Go...'82-'97, a collection released by Sonic Unyon, and by a series of reunion concerts that includes a show tonight at the Horseshoe that will bring back together every one of the band's many lineups.

Change Of Heart were together longer than the Beatles and made more albums than Cream, but they come from an iPod-less, pre-mp3 world that leaves scant traces of the band in a Google search. The scene they came from is even more obscure today - a varied collection of bands like The Lawn, Plasterscene Replicas, Groovy Religion, A Neon Rome and 13 Engines. Some bands from the scene are still around today (Cowboy Junkies) and some managed to break out nationally (Rheostatics, Shadowy Men,) but the Queen West scene that Blurton cut his teeth in is still a lost decade of music that deserves rediscovery.

I talked to Ian at a Parkdale diner just a few yards from where the cover of 50 Ft. Up, their first album, was shot.

What was the Queen Street music scene like when you formed Change Of Heart in 1982?

"It was like punk rock was dying and post-punk was just starting, and there was that little middle ground there, and I guess we fell into that. The Pistols as much as the Gang of Four, so it was interesting in that we weren't locked into being punk rockers so much. When that music started up they said 'that's not punk,' but we just embraced it."

"One of my favorite bands was Hunger Project, which was Cowboy Junkies pre-Cowboy Junkies. When I saw them they just blew my mind right open, because they were a local band but they were just insanely awesome. Rent Boys, Handsome Ned - that was the beautiful thing about Toronto at that time that it was so small that you could be hanging out with Handsome Ned on your left hand and Rent Boys on your right. Now that just does not happen - it's just so divided."

You were one of the few bands here that actually went on the road and played outside southern Ontario, back when touring conditions were, to put it mildly, pretty primitive.

"We committed ourselves to sleeping on floors. That's why we started camping - it was great, not sleeping on somebody's dirty floor. Make a little coffee on the fire in the morning."

There wasn't a lot of support from the industry for what we'd call indie bands back then.

"Except for people like Randy Boyd at Cargo in Montreal, I don't know if this was true but somebody told me that he bought 40 copies of the first record and gave them away to people, so there were people in the pockets who made it a lot easier, but we just loved the adventure of it, really. Playing Prince George on the second album tour when, you know, D.O.A. had been there, but all the other bands hadn't been there, and that's why we'd always go to the East Coast. I remember when we went to Newfoundland the first time. It was awesome. The reception was great - small town reception was hard to deny."

In 1992 you released Smile - a double album, recorded live, with a huge cast of extra musicians. It was pretty ambitious for a band that was still playing local clubs like the Rivoli.

"It kind of boiled down to economics, because our budget was $3000 for that album, so we thought 'how can we do this?' And then Ron (Duffy - original CoH drummer) quit the band, and it was more like a fuck it, let's do it all. Let's cut it live. Let's get thirteen people in the band for four days and have a horn section and have backup singers and have all the things that we probably would normally have put on that record anyways."

"And Michael-Philip (Wojewoda, producer) steered that ship amazingly well considering that he was amazingly sick at the time. But that was the general idea - we'd already hit a wall. We'd put out three records and lost money on every tour and record that we put out, and we were just like, 'well, if we're going to do this, let's do it all out.' I think we were still writing songs until two weeks before we recorded, and we nailed them all except for one song."

Two years later you beat bands like Treble Charger and won $100,000 from CFNY for their Discovery to Disc contest. I assume you used the money to put out your next record, Tummysuckle?

"We actually made it before, and then when we won the money we hired a guy to remix it, so it was out independently. We literally handed (the single) 'Herstory' into CFNY fifteen minutes before the contest closed. And when we did I remember the guy behind the counter was like, 'Why bother - let's just throw all of these other ones away now.'"

"It actually went incredibly fast, because we had so many debts. We took the money and put it into Chemical Sound so we would always have a place to record, and bought a really good mixing board, a bunch of mikes. And that studio lasted until last year, so it feels like a great idea, especially for a studio in this day and age to still be going even though we had no involvement in it - the concept was still there. And I got a really nice amp."

Do you still have the amp?

By the time that Steelteeth, your last record, came out, you were the only original member left in the band.

"It was just me. Rob (Taylor, bassist) had quit, after Smile, but Bernard (Maiezza, keyboardist) had been around - we'd played in sister bands. I'd played in Neon Rome and he'd played in Neon Rome, so it didn't really feel like I was totally by myself. It was a weird record. We recorded 40 songs and there's, like, thirteen on it. So we did a lot of recording. We did one aborted session that cost a lot of money. We spent way more than $100,000 on the record - double that, at least. And it sold way worse than Tummysuckle. We'd done the Tragically Hip tour and then we were on the road by ourselves."

"To this day, I don't know if this is right, but we went into a record store and a friend said 'your record got deleted. Steelteeth.' We came home, and EMI/Virgin were like 'ehhhh' and we thought it seemed like a fitting point. I was so burnt out. We couldn't hold on to a manager - a pretty unmanageable band, admittedly. We couldn't get a release outside Canada, and just felt trapped. I always felt we should have gone to Europe, always, since probably '92." 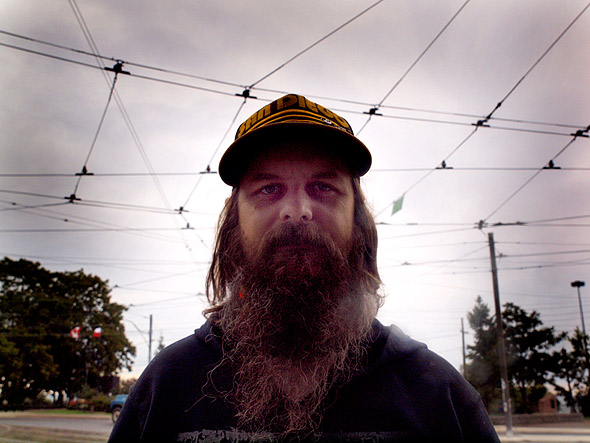 I assume this was all a learning experience, since you managed to do all of that with C'Mon.

"We went to Europe. Our records came out in Europe. I don't know why it was such a problem, because everyone else - the Doughboys, SNFU, they were all going to Europe and had releases there. One of the funniest things was when we were on tour with C'Mon, Katie and I went to Paris after the tour and we were in a record store, and there was the rack of rare records - Change of Heart, Soapbox, on the wall. That was mindblowing."

Do you think the Toronto music scene in the '80s and early '90s has been unjustly ignored?

"It was equal to London and New York and L.A. and anything from that time period. I think you could put The Lawn up against Leaving Trains. You could put any of these bands against each other. There was no Black Flag, but I think there was an equal in this city to any band that anyone talked about at the time."

What's it like playing with your old bandmates now? Are there still any hard feelings?

"It's been good feelings. There's always residual bad feelings because bad things did happen, but I jammed with Rob Taylor last night for the first time in 20 years, and it was so funny. We were laughing - we started playing 'Brand New Cadillac' and talked about doing 'What We All Want' by Gang of Four, which is what we used to do. And then trying to remember things - it's interesting the way that most of us remember things, and most of us are wrong on dates and what actually happened, but we remember specific things."