Gossip full of campy fun at The Phoenix

Gossip put on a campy fun show at The Phoenix entering last weekend, while others began celebrating Nuit Blanche. Dedicating the show to Will Munro, singer Beth Ditto knew her crowd well and pandered well to them. As the drunken boy next to me pointed out just before the show began â as he almost spilled an entire cup of beer on my arm â I'm the one straight guy at the party. 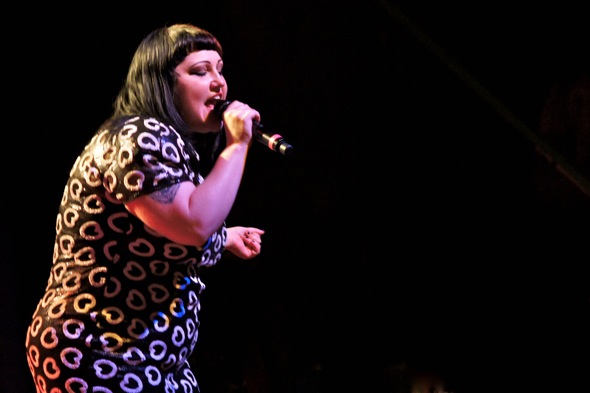 The evening's set was rife with covers, featuring a Psychokiller-cum-Bad Romance mashup about the fourth song in. It was a lot better integrated into her song, Listen Up than when Madonna tried to do the same during one of her songs at ACC show last month.

"Madonna's just gotta say hi to us," gushed Ditto. "We're playing in Montreal the same night as her." 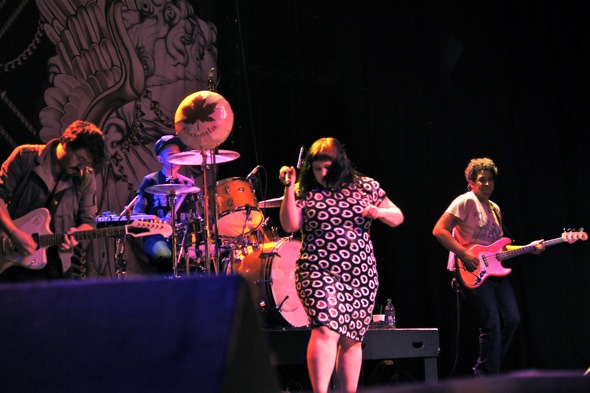 Ditto appeared on stage with a helium-filled balloon adorned with a big maple leaf. It wasn't long before she sucked in a mouthful and sung into the mic with a Mickey Mouse voice, launching into Get A Job, which got the crowd jumping up and down with delight. Someone in the front row offered her what looked like a shot of Jaegermeister, which didn't seem to go down too well after the helium.

At one point, Ditto asked for her vocals to be turned down in the mix. And from that point onwards, I found the drums (especially the kick) to be way too loud.

One of the highlights of the night came when Stephfon, the singer of of Magic Mouth, one of the opening acts, joined Ditto for a tune, showing great synergy, obviously having a ball on stage together, in spite of their troubles sharing one microphone.

Aside from some interaction with her touring keyboardist, Katy Davidson, Ditto didn't interact much with the rest of her band. She saved her schtick for the audience. At times, she took to the sides of the stage, even lounging on top of the big speaker stacks, losing her shoes early on. 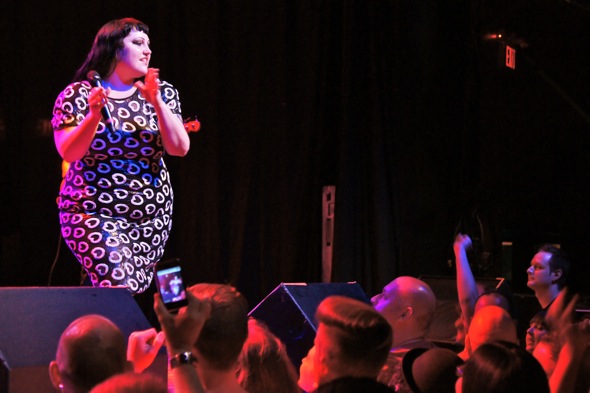 It was Davidson's birthday that night, and when Ditto returned to the stage for the encore, she sung Stevie Wonder's version of Happy Birthday to her before launching into Gossip's best known hit, Heavy Cross -- which just pumped up the crowd even more. That song always reminds me of Big Pig's 1987 hit Breakaway.

The evening had a definite celebratory tone. But I could've done with more Gossip tunes and less covers. By the end of the show, we got to hear Tina Turner's "What's Love Got to Do With It" and Dolly Parton's "9 to 5."

Before all was said and done, Ditto left the stage to wander through the crowd with her mic, singing the uplifting Standing in the Way of Control and making a mashup of "Smells Like Teen Spirit," "Please Don't Stop the Music" and "Wanna Be Startin' Somethin'."

And, as if channeling Kurt Cobain, Rihanna and Michael Jackson weren't enough for this crowd, she broke into a gospel-like, if a little off-key rendition of Whitney Houston's "I Will Always Love You," to top it all off, somehow ending up on the balcony in just her Spanx.