Things get mesmerizingly weird with David Byrne and St. Vincent

Taking a seat at a concert is always a little odd. Too formal. Especially so when the frontman of the Talking Heads is sharing the stage with St. Vincent (Annie Clark) and an accompanying full band, including French horn and tuba. But when I gaze around at the audience in the orchestra section, I'm junior to most. Original Talking Heads fans, as in, they listened to the Talking Heads when the Talking Heads were making albums, flocked to see their beloved avant-garde rocker Byrne. They weren't let down. 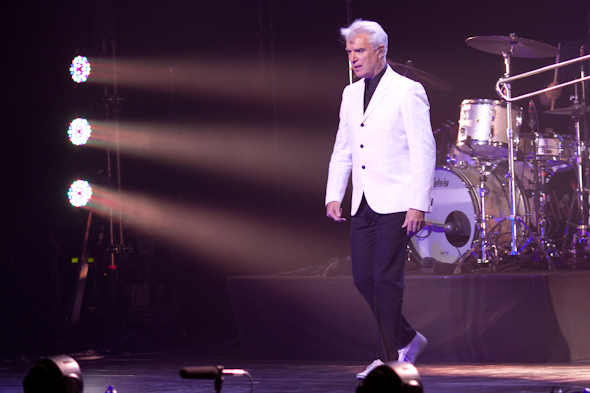 So here we are sitting at the Queen Elizabeth Theatre, a "new" concert venue that the majority of the audience (including myself) hadn't ventured to before, including Byrne and Clark. To make this point, after opening with their new formidable pop-funk single, "Who," Byrne quips: "We heard there were portraits of the Queen with her shirt off here," before adding, aptly timed, "She's going to give Kate [Middleton] a run for her money." That's one way to set the tone. 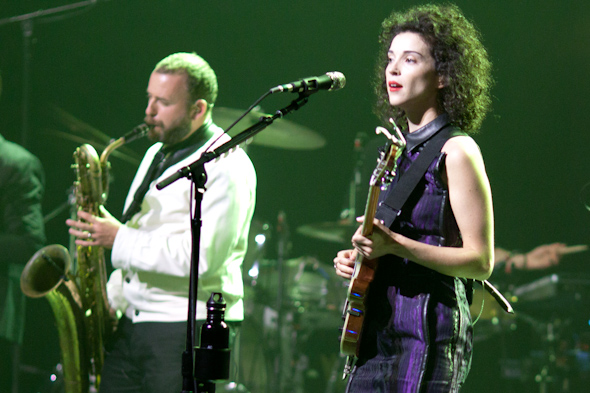 Byrne and Clark, both confidently cool performers in their own right meld together seamlessly with the big uptempo brass arrangements. Otherwise than chill and confident, though, they're both mesmerizingly weird and beautiful. He with his white hair, dapper white suit and stiff, one-two dance moves and her with her mauve dress, angelic face and hastened back and forth shuffle. Not to forget original in not only their performance, but compositions. Inspired by the teaming up of Bjรถrk and the Dirty Projectors, it took three years for Byrne and Clark to pull the album together. 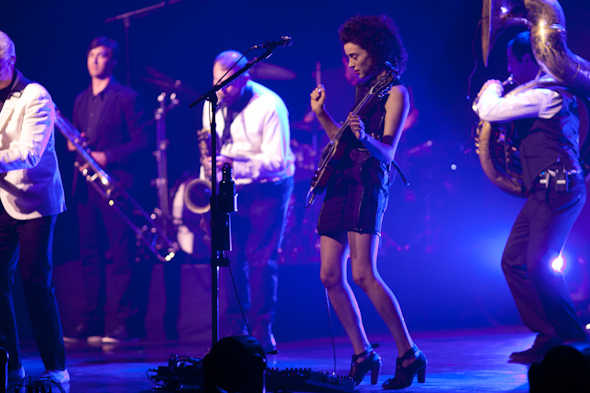 Their equally distinct voices are instantly recognizable in their own right and the night's sound did not belie this. It was punctuated, if anything. The band, all dressed up in black and white, danced around the stage in little choreographed numbers as they pumped out the unique arrangements. Part funk, part pop, part alternative, part art project. But at its core is a brass section that really carries the sound. 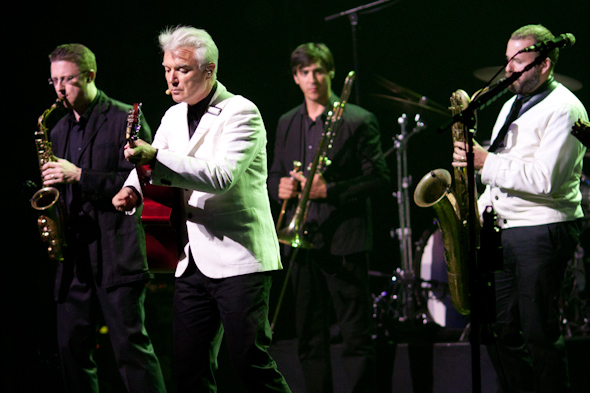 The 90-minute show was comprised of a mixture between Byrne and Clark's new album, Love this Giant, including tracks like "Lazarus," "Weekend in the Dust" and "The Forest Awakes" to St. Vincent's "Cheerleader" and the beautiful and haunting "Cruel" to Byrne's solo work, including, "Like Humans Do," and "Lazy." And, to the crowd's glee, Talking Head's classics "This Must be The Place," "Burning Down the House" (which got the crowd on their feet, of course) and "Road to Nowhere" to close out the show. Now all of this was done over a wide array of original compositions that jive and bounce, keeping the audience perpetually swaying and nodding along. 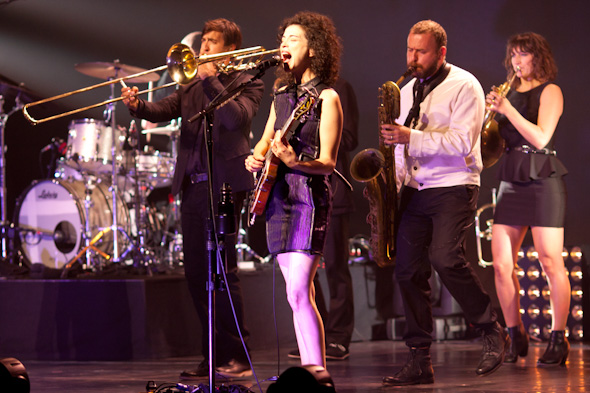 With two standing ovations (remember, we were seated) to amount to a double encore, Byrne and Clark almost seemed shocked, or humbled as they took their final bow.