I arrived at Dundas Square at around 4:45pm on a chilly autumn Sunday, dissuaded from attending earlier due to the rain. Despite the less-than-ideal weather, there was still a decent sized crowd in attendance. Aside from performances happening on the main stage, the Manifesto Festival's Main Event, "Live at the Square," converted the square into an epicenter of Toronto hip hop arts and culture. With a diverse array of creative displays and activities going on, it soon became easy to forget the cold weather. 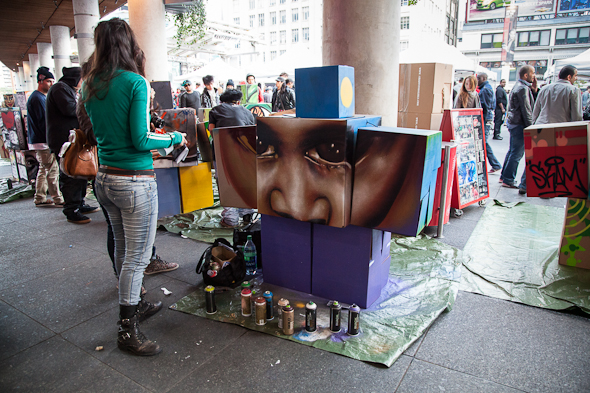 Rather than the massive murals set up for graffiti artists in past years, this year The Graffiti BoxMen Project was set up on the north side of square, painting on cardboard "box men" to represent graffiti artists who "who often remain faceless due to the illegal nature of the art." 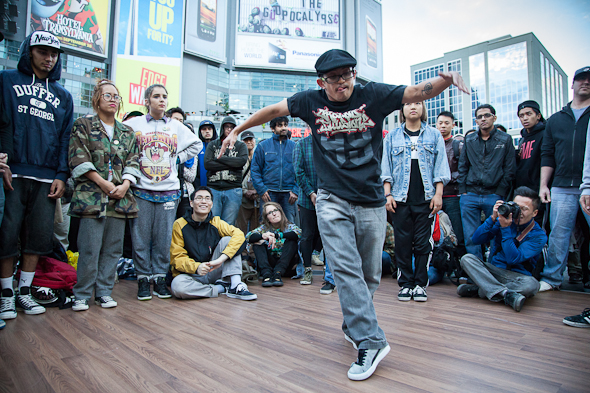 On the west side of the square, the "All Day Cypher Floor" was set up, at which dancers showcased various styles and techniques throughout the day, consistently drawing a large crowd of spectators around them. "The Freshest Goods Market" showcased a variety of independent clothing and apparel vendors from around the city. 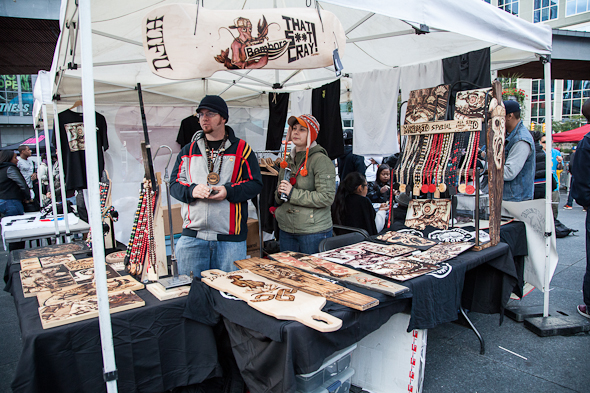 One notable vendor was the Champstiles wood-burning shop, at which an array of pyrographic designs were etched onto wooden chain pendants, murals, and even long-boards. 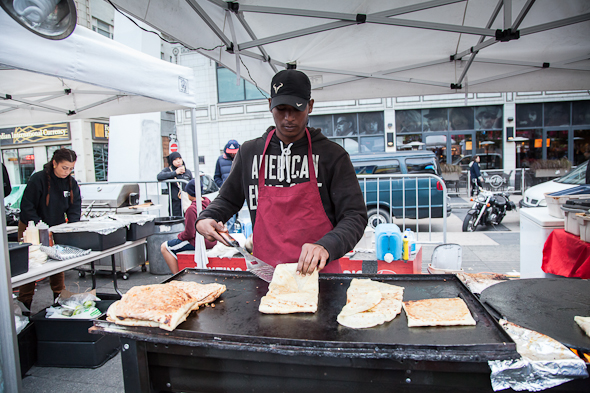 At the south side of the square was "The Freshest Foods Market," which included One Love Vegetarian, from which I devoured a delicious barbeque tofu roti. There were also various workshops going on throughout the day, ranging from cooking to live beat-making, however it was difficult to attend to everything, as many events and performances occurred simultaneously. 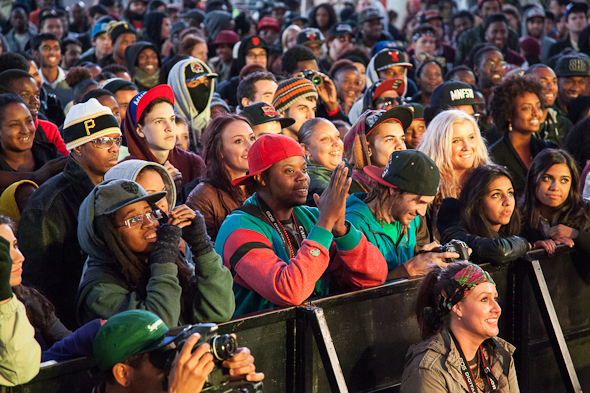 The main stage on the east side of Dundas Square showcased a slew of (mostly) local hip hop artists throughout the day. Having arrived in the late afternoon, I missed several of the earlier performances, but there was still a lot of talent to be seen. 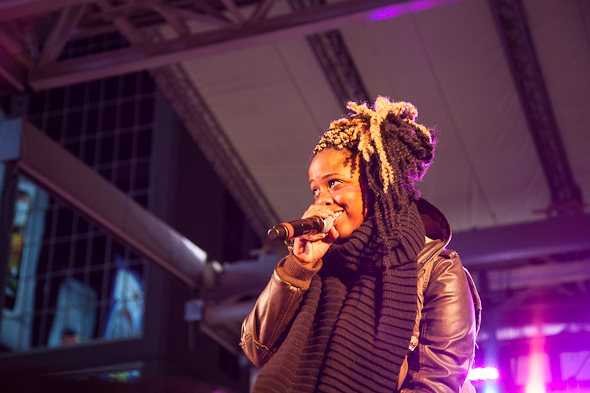 Soon after I arrived, young female emcee JellyTooFly took the stage with her gritty, street-style raps, displaying good crowd control and stage-presence. Up next was another young rapper, Raz Fresco, who gave an energetic performance to some party-type music with trap-beat production.

Emcee Tre Mission showcased great breath control with his double-time flows, which made his songs catchy, if not somewhat repetitive. Native hip hop emcee/b-boy Que Rock was the first artist I saw on the main stage to rap with more "old school" flows and make a conscious effort to convey a message about the importance of art and hip hop as modes of self-expression. 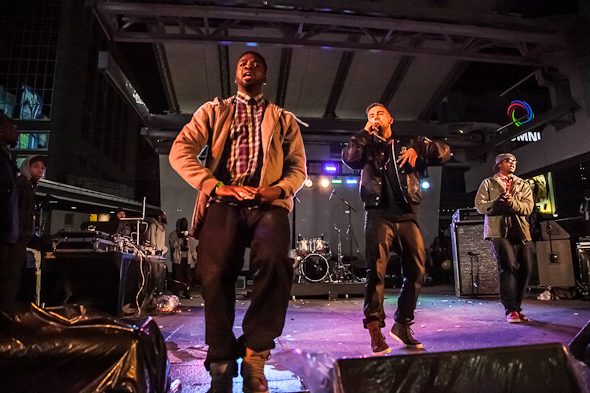 Skratch (from The Roots Crew) followed with a live beat-box set, using distortion effects and a loop machine to deliver an uncannily accurate imitation of the chorus to M.O.P.'s "Ante Up," accompanied by a succession of talented dancers demonstrating various styles.

The performances continued on as the skies grew darker and the air a bit colder. Producer Fresh Kils was next on stage with an entertaining series of energetic, live MPC beat routines, which got the growing masses in front of the stage bobbing their heads and cheering. Up-and-coming duo The Airplane Boys took the stage with an enthusiastic set accompanied by a live band, although their vocals were quite difficult to hear at times (likely sound level issues). 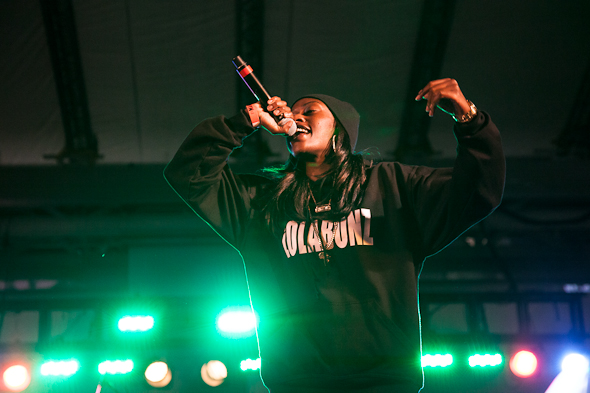 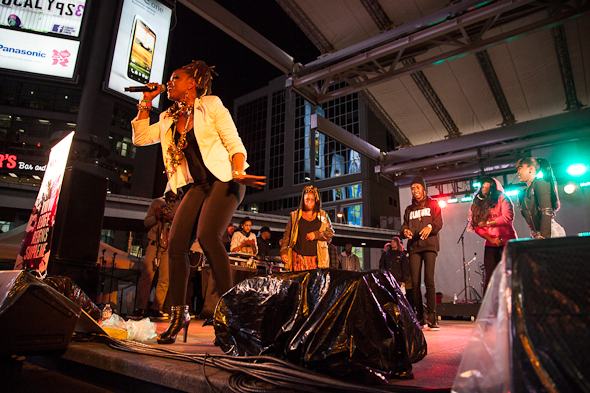 Canadian hip hop trailblazer Maestro Fresh Wes made a grand entrance to the stage, preceded by two dancers dressed as Canadian Mounties, performing singles ranging from his classic "Let Your Backbone Slide" up to his recent release, "Black Tuxedo," and the legendary DJ Grouch took a few moments to showcase his scratching abilities near the end of the set. 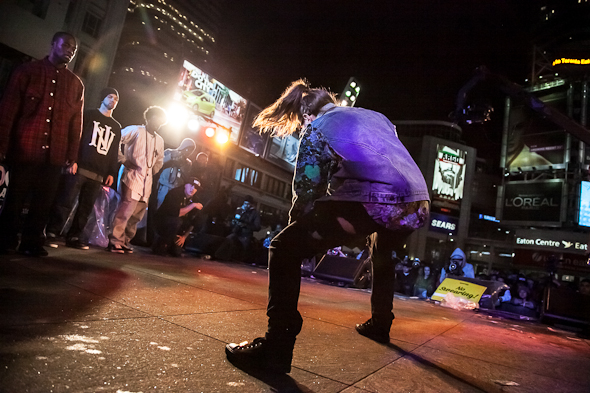 Newly formed duo The Closers (Rich Kidd and Vancouver emcee/singer SonReal) followed with a theatrical performance complete with sparklers, confetti, and fireworks beside the stage, although microphone levels again made much of the vocals hard to hear. The "Last Style Standing" dance competition saw elimination-style dance battles between dancers of different specializations (popping and locking, house, hip hop, and b-boy/b-girl). 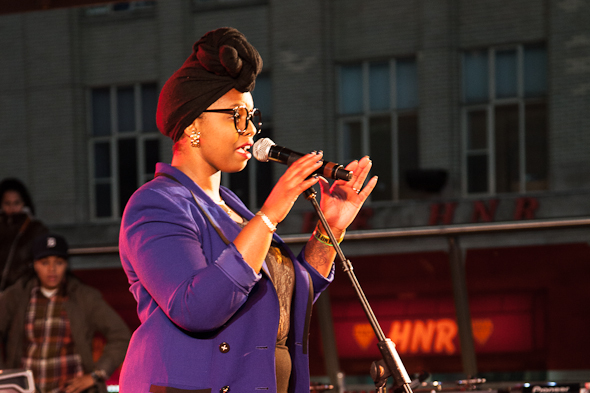 By then, the crowd had grown to number in the thousands and anticipation of the final acts was heavy in the air. Promising singer Shi Wisdom took the stage with a live band, gracing the airwaves with her beautiful, near-perfect pitch voice - one of the few artists of the day to be clearly audible over her band, despite any mic-level issues. 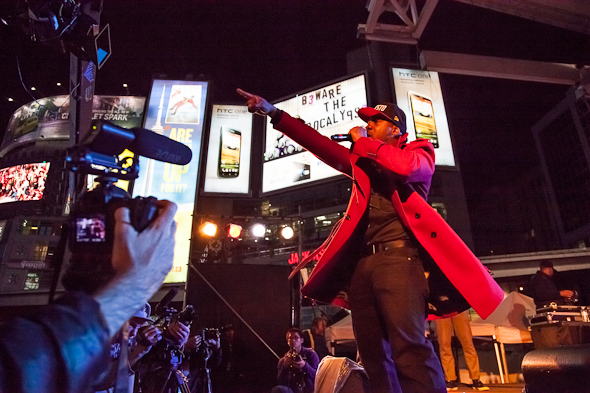 In an unannounced turn of events, The Beatnuts and The Alkaholiks made a surprise and comical appearance, dropping a few verses, and being urged not to curse by stage management before leaving the stage. 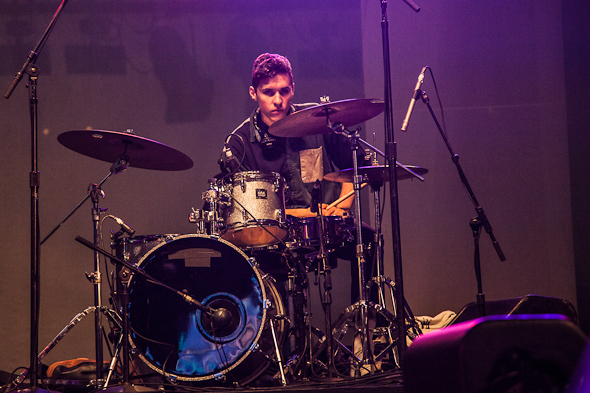 Finally, the headliners of the evening took the stage--Queens New York emcee Pharoahe Monch accompanied by Toronto's own BADBADNOTGOOD. 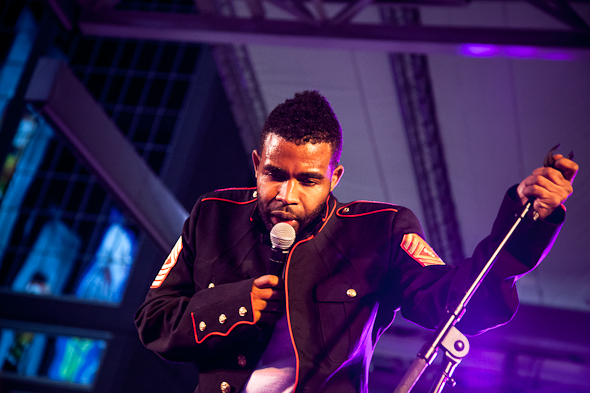 Pharoahe is one of the few emcees I've heard who sounds just as good live as he does on his records (despite suffering from asthma). Addressing the need for censorship due the Manifesto Festival being government-funded and in a public, outdoor venue, Pharoahe announced he would be using the letter "b" in place of the letter "f" as he commenced to perform a revised version of a song now titled, "Buck You."

Pharoahe gave an overall energetic, fun, and memorable performance, taking time between his songs to deliver a message of responsibility for self and not taking life for granted to the audience. BBNG's performance was complementary to the emcee's raps, while songstress MeLa Machinko's powerful and soulful voice filled Dundas Square. 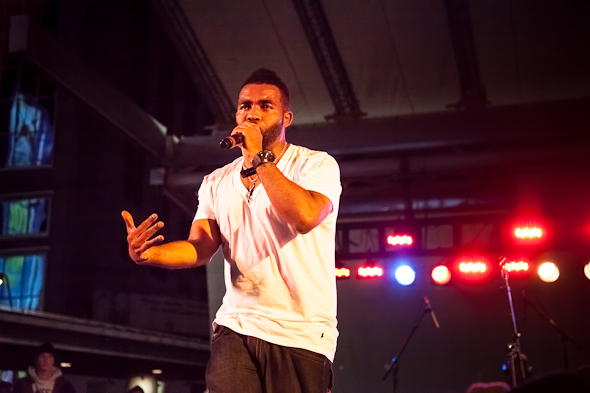 By the time Pharoahe closed his set with his famous single, "Simon Says," (leaving the swearing part to be filled in by the audience), the crowd was jumping and the energy was high. 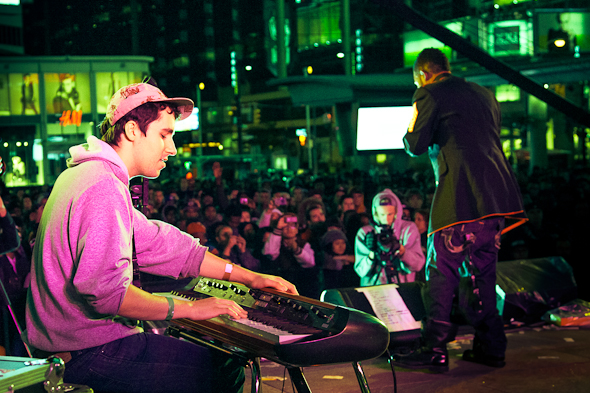 I talked to Jesse Ohtake, Programming Director of Manifesto Festival and Manifesto Community Projects, for a few minutes at the end of the night to hear some of his thoughts on the day. "We are not just a festival," explained Jesse, "we are an all-around community and entertainment organization. We marketed with concepts, ideals, and feelings this year, and I think we touched a lot of different people, even if they weren't necessarily here [today]." 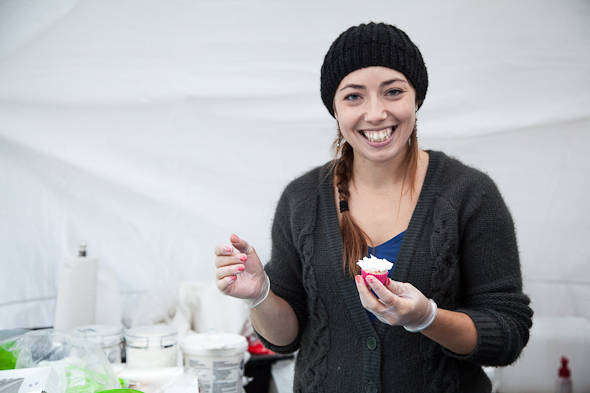 I asked him why he thinks that art is important and what the overall purpose of Manifesto is, to which he replied that they were "trying to improve the culture of Toronto as a whole, to show an appreciation of each other's efforts and work, and to make sure art flourishes." 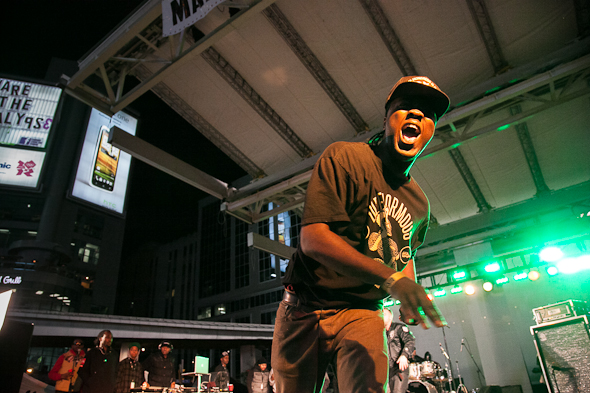 In regard to the diverse range and levels of artists who took part in the festival, Jesse explains that he and his team "work to try to book regular people who are starting out--aside from the community aspect, there's a lot of learning by artists, which is always a big aim [of ours]." 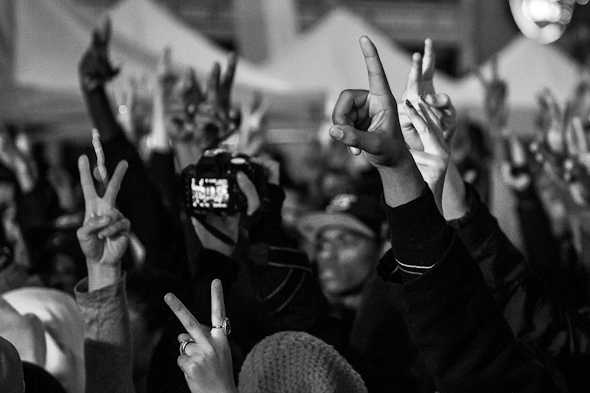 The 6th Annual Manifesto Festival's main event was thoroughly entertaining and inspirational. The day's events brought together artists and fans alike from throughout the GTA's hip hop and other arts communities to celebrate creativity and self-expression in a fun and powerful way. Despite working with a smaller budget this year and shifting their marketing strategies a bit, the main event of the festival was still a tremendous success. I'm definitely looking forward to upcoming Manifesto events.