Last night the Polaris Prize gala rolled into the Masonic Temple at Yonge and Church, and for the second year in a row a Canadian heavyweight took the prize. Presented by "Tim and Jim" of last year's winners The Arcade Fire, Feist crawled under her table in response to hearing her name. She was admittedly as surprised as many of us were.

Metals is, of course, a fantastic album, and I think shows Feist at her most confident: the tracks come off as effortless and natural as ever. Her performance last night with recently-signed Arts and Crafters Snowblink was gorgeous — culminating with The Bad in Each Other, Feist's ability as both a singer and guitarist were on obvious display. 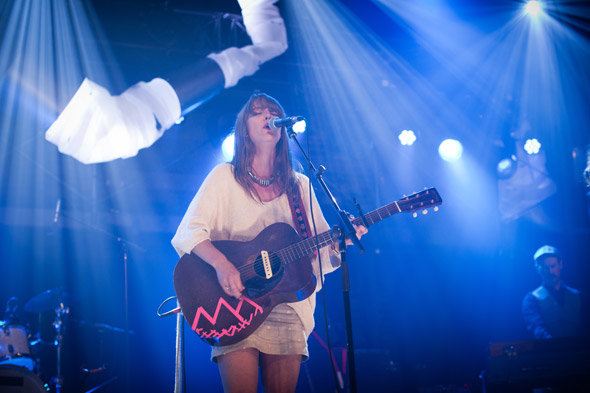 The night consisted of seven performances, each amazing in their own right. Fucked Up opened the show with Jennifer Castle joining them on stage for The Other Shoe. Damien knocked over lights, kissed babies and, yes, took his shirt off, so I guess they wont be retiring any time soon.

The highlight of the night for me was Grimes and her pole dancer "Gary." Almost out-shining Grimes herself, he was the most graceful, agile, strong, ETC dancer I've ever seen — and in the sparkliest black underwear. Her awkward demeanour never fails to charm somehow — when asked by Grant Lawrence "do you have anything you'd like to say?" she stuttered "about what? you mean..about...this?"

Another obvious highlight of the night, and in stark contrast to Grimes, was the talented Kathleen Edwards eloquent and passionate (and littered with f-bombs) response to Lawrence's same question. She thanked Polaris for what they do for artists, for not adding to the "shit parade" and other artists themselves for being so brave.

In fact, in Feist's acceptance speech she said she wished she said everything Edwards had if only she was "as smart and pretty" as her.

The quality of all the shortlisted albums reaffirms what an amazing job The Polaris Prize is doing to draw attention to deserving artists. I can't wait to see what they come up with next year.

You can catch a special broadcast of the event this Saturday at 10pm on MuchMusic.