The Melody Bar slows down some kittens

As a cub music reporter, it's my responsibility to find the hottest acts in town and hold them to a level of scrutiny honed by years of passing indiscriminate judgment on bands sheerly on the basis that I have a shit-ton of Mp3s on my computer.

This past Thursday I set my sights on Run with the Kittens (who I will now refer to as RWTK as I do not get paid by the word), a Toronto four piece weirdo-rock outfit with a reputation for being an electrifying live act. While I see no reason to refute this, the band was ultimately let down by the beautiful Gladstone Melody Bar, which proved ill-suited for RWTK.

The night was started by Barry Lyndon, who I have dubbed Smoke Break due to the high number of smoke breaks taken during his set. No slight on Barry, but I think his style lends itself to a more intimate space. Smoke Break is a pretty good name, though â he should consider it. 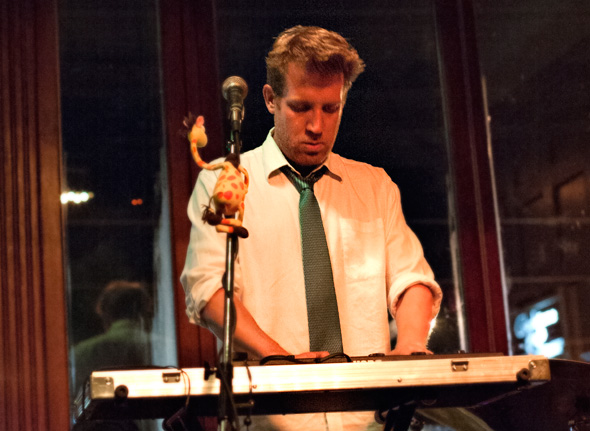 RWTK arrived after Barry's set and engaged in the quickest unload and set up I've ever seen in all my years of watching bands unloading and setting up while I refused to offer any help. These dudes are obviously pros.

As they took the stage, an audience quickly amassed as though from the ether, and a large contingent planted themselves in front of the stage. This is the first time I've seen this happen at the Melody Bar.

And that was exactly the problem. Even missing a member, the band was super tight, super talented and genuinely passionate. Unfortunately, tucked away in the corner of the bar on that tiny stage and with a tiny space for the audience to dance, a lot of the energy was lost to the cavernous vacuum. That's not to say that the Melody Bar isn't lovely, but it's really more a venue for low key background-style-shit. 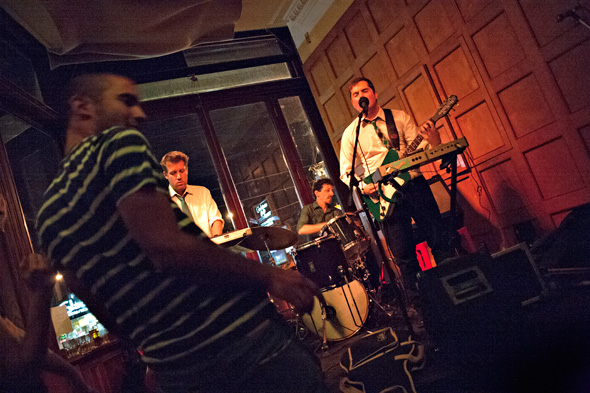 And yes, I could have simply stood at the front, but the prospect of standing wedged between people dancing and tables held little appeal.

And as inappropriate a venue as it was, it's not my major criticism â that I will address directly to the band.

I didn't care for the fact that your inter-song banter was mainly composed of statements about my presence (as a reviewer). I felt singled out, and that led to feelings of awkwardness and alienation. You should be tearing down walls and not building them up around cool reporters and their super-attractive friends.

Please leave making reviewers feel like horses' asses to the commenters. They do it better.

PS: Obviously, a quick shout out and the offer of a free drink is appropriate.

In conclusion, I look forward to seeing another RWTK show in a more appropriate venue.

Writing by the above signed / photos by Steven Goetz