Get to know a DJ: The Mailman (Joel Waznicky) of DeadlyVanity

The King St. basement where Toronto goes to play ping pong seems like an unlikely place to find one of Toronto's up-and-coming deep house DJs. However, that's exactly where Joel Waznicky, one-half of DeadlyVanity, spends each Friday night fine-tuning his craft from 10:00pm to 2:30am. Dodging more than one errant ping pong ball, I braved the perils of SPiN to sit down with Joel and talk to him about his deejaying, his day job as a post office worker, and what the future holds for him.

How did you get started with deejaying?

I've been a musician since I was sixteen, and from the time I went to high school until about two years ago, I've played in at least six or seven bands.

It was my brother that got me into dance music roughly four years ago. I started with minimal techno — Stephan Bodzin and Marc Romboy, to be specific. I've since worked my way through several other genres. Thankfully, I eventually found a comfortable home in deep house and techno. Lately, all I listen to is dance music. As a result, I decided to start producing myself. So, I figured I would learn how to DJ as well. I love to dance, and I love making other people dance. I soon hope to start dropping my own productions into my mixes.

When did you first get a set of turntables?

I don't actually own a set of turntables, though I did borrow a pair from a friend and used them for a couple of months to get a grip on beat-matching (Thanks, Markis!). Afterwards, I did some research on the different ways you can deejay — CDJs, vinyl, Serato, and Ableton — and Traktor seemed like the most creative option. I feel Traktor gives me more options and controls, which allows me add different colours and effects to a mix. That said, Traktor is just my personal preference: do whatever makes you happy and just keep the dance floor pulsing. 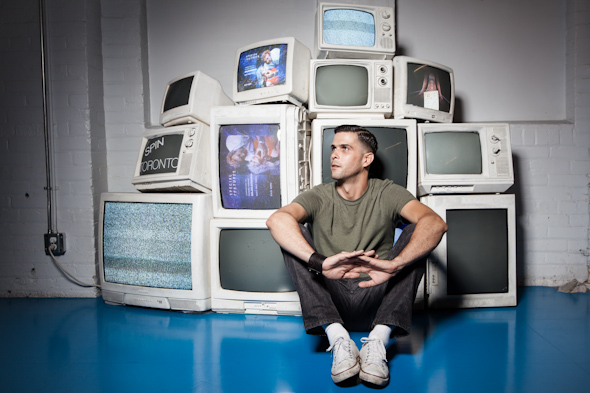 Can you tell us about DeadlyVanity, your current DJing and production project?

DeadlyVanity is a collaboration between James MacGregor (James, like Joel, was a guitarist in several bands during his stay in Port Perry) and myself. James and I both grew up in Port Perry. And while we were aware of one another in Port Perry, we weren't actually friends.

After high school, I moved to Toronto to pursue a music career. Eventually I was looking for a new place to live, and it was at that point that James and I connected. We ended up getting a place and starting a new band together.

Unfortunately, after all the bullshit that goes along with being in a band — egos, politics, scheduling, creative differences — we decided that we'd had enough of being in a band. It was at that point that we both fell into the dance scene. So, here we are making house/techno music together.

It's a lot easier with just two heads. We have roughly the same taste in dance music, which makes it easy to deejay and produce together. We also have strengths in different areas of production, so we complement each other well. That also makes for really satisfying studio sessions. And we're looking forward to performing live together (currently, Joel and James take turns deejaying individually during a set). Also, expect a lot of original DeadlyVanity tunes in the future.

Want to take us through how you produce a song?

I go out into the world and try to experience life — new situations, new faces — because ultimately that's what feeds my creativity. After not being creative for a while, I'll suddenly become inspired and be on Ableton for six or seven hours a day — trying different sounds, new songwriting ideas, etc. Afterwards, I'll go to bed, then go to work for a bit, and then repeat the process the next day.

If I'm not feeling something, then I won't try to force it. Forcing something isn't natural to me. Going with the flow has always yielded the best results in my life, and when James and I link up on that level, we produce some solid sounds.

I'd also say that it happens differently each time. I might have a fat drum beat laid out and then we'll add a thick synth line to it, or we'll have an older idea that we haven't worked on in a while that just sounds fresh when we revisit it. 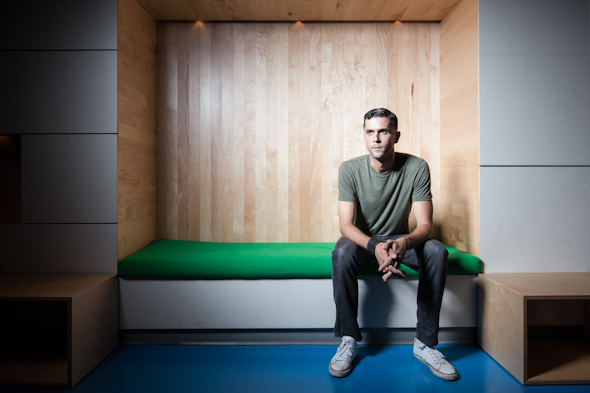 How's your residency at SPiN going?

I've been a DJ at SPiN since September 2011. A friend of mine introduced me to Ryan, the owner of SPiN, who was looking to bring in some fresh music to the club's Friday night. Ryan gave me a shot and it went over well. It's a good venue for deeper music, as people don't really go there to dance, but to let loose and play some ping-pong.

Ryan has been the best. I told him: "Honestly, I don't do requests. I play what I play," and he was cool with it. I mean, if you request something that I have in my collection, then I'll obviously consider it.

I imagine you still get a lot of requests, though?

Yeah, that's the tough part. People actually get mad when I tell them I can't play their track. I get evil looks and cheap insults, but I guess that's part of the job.

How do you deal with that?

One "requester" actually brought what seemed like her father over after I denied her a request. He said that he could go to his car, grab her iPod, and take over. I said, "Okay, great, I can have a break, then." I was obviously joking, but I knew he wasn't going to act on it, and thankfully he didn't.

Normally I don't ask a DJ about their name, but in your case, there's an important backstory to your deejaying alias. Care to tell us about your day job as a post office worker and are there any interesting stories you can share?

My residency at SPiN is the only gig I do alone, and so the moniker that came pretty easily was The Mailman. When I'm deejaying, I see myself as delivering the goods.

During the day, I work for Canada Post as a letter carrier. I love my job — I get to be outside most of the day, which keeps me fit, and I meet a lot of new people. When I first moved to Toronto in 1999, I started in the service industry. After five years I got really sick of it, so I started sending my resume into Canada Post. In fact, I sent them my resume every six months. Finally, two years later, I got a call. They started me off at Jane and Finch. You can imagine the fun times that ensued.

We recently went through a lockout, and because of how the media portrayed it, most people thought we went on a strike, when we were actually locked out by the corporation. That was one of the most uncertain times in my life. 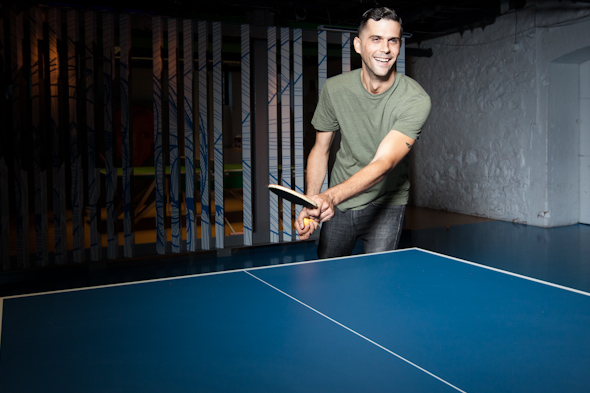 Now that you've told us a bit about your life as a DJ and post office worker, can you give us insight into Joel the person? Beside deejaying, what are some of the things that motivate and inspire you?

I'd say I'm pretty simple guy; I don't need much to be happy. That said, spending time with my family is a very important part of my life. My brother is my best friend, and I like to see him and his family at least once a week. It keeps me grounded. I've been an uncle for two-and-a-half years now, and it's the greatest thing! Surrounding myself with wonderful and loving people inspires me to write music and enjoy every moment. I seem to have attracted a stellar group of friends over the past four years as well.

I would also say that enjoying good food and trying new cuisines are two of my favourite activities. And one last thing that has changed my life: meditation. I recommend this to anyone and everyone. It simplifies things and makes room for the important stuff.

I'd love to see DeadlyVanity's first official release on one of our favourite labels. We've been making our way towards that, and I'm very excited about it. I've always been a perfectionist when it comes to writing music — which is not such a good thing — so I'm looking forward to having a final product to release into the wild that I'm happy with. I'd also like to start remixing some of my favourite artists's tunes as well. Finally, I always want more gear — more synths, drum machines, and pre-amps.

James and I want to start performing interactively as a duo soon, as opposed to just going back-and-forth. We want to bring Ableton into our live set-up and sync it with Traktor. I'm also looking forward to incorporating some live guitar into our productions.

Beyond that, I'm just happy to be a part of the scene in Toronto. I'm meeting a lot of great people that love good music as much as I do. DeadlyVanity recently won a contest put on by Platform Entertainment Group. It was for their Sharks with Lasers podcast. Since then we've had quite a few opportunities to hang, spin, and interact with some fantastic human beings.

East side or west side? West side.

Starbucks or Darkhorse? I'm not a coffee guy, but I love green tea.