There was a moment during Evening Hymns' set on Friday night at the Theatre Centre that perfectly encapsulated one of the major themes running through their outstanding new LP, Spectral Dusk. Following a particularly powerful take on "Moon River," Jonas Bonnetta, frontman and songwriter for the indie-folk band, mentioned that they don't often perform the song live when touring as a two-piece.

"It's pretty depressing with just us," motioning to bassist Sylvie Smith, his partner and only other consistent Evening Hymns member. Then he turned back slightly, looking gladly at his six-piece backing band assembled for the night's hometown album release show as part of SummerWorks music series. Quickly, he added, "but it's alright with all of you." 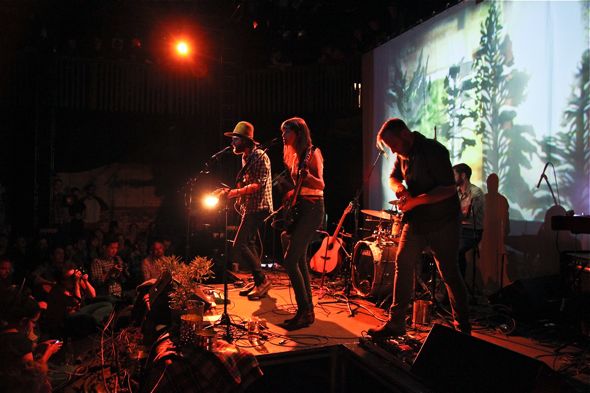 While it was indeed sonically beneficial to have such a large backing band onhand to fill out the song's studio nuance - which features trumpet, violin, and more than a few layers of guitar - one gets the sense Bonnetta was referring to the solace found in the company of family, friends and fans who gathered to take in the unique SummerWorks show. Spectral Dusk, the band's second full-length, is an exploration of the grief, transition, and hope associated with losing a loved one, all through the lens of Bonnetta's relationship with his father, who passed away shortly before the release of the first Evening Hymns LP, 2009's Spirit Guides.

The concept of catharsis through community wasn't just evident in the band's live set, but was also a major motivation in the album's creation. Heading north to a remote log cabin near Perth, ON, close to the area Bonnetta grew up, he and a roster of musician friends recorded the album over nine days of pickup hockey, whiskey, and living in relative seclusion. The woodsy approach explicitly informs the LP's lyrical content, which includes references to "the Burn," a replanted forest in which Bonnetta's father shot his first deer, and other imagery reflecting on the songwriter's relationship with his father. Field recordings factor in heavily as well, meditative found sounds and keyboard drones breaking up the more structured, pop-oriented tracks. 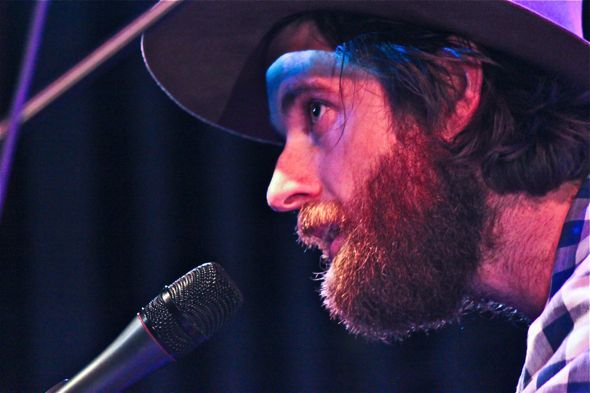 It's an intensely personal affair, no doubt. However, with twelve other musicians involved throughout the recording process - including fellow Torontonians The Wooden Sky, with whom Bonnetta and Smith will be touring Europe next month - it's evident that collaboration works as the conduit for Bonnetta to bring his songs into being. Even though the Wooden Sky weren't able to make it, this lineup of Evening Hymns for the night's performance played with fervor through a setlist heavy on Spectral Dusk but also featuring a few Spirit Guides highlights, including the jaunty "Broken Rifle."

To mark the occasion of both the record's release and the unique opportunities afforded in conjunction with SummerWorks, the band employed noted visual performance artist Sean Frey utilize projections throughout the duration of their set. Positioned slightly out of sight left of the stage, Frey combined tactile, painted artwork and archival Super 8 footage of locales central to Spectral Dusk, grandly hoisting the results on a large cloth draped behind the band. The collaboration was clearly a labour of love - Frey's projections were complimentary to the songs in every conceivable way, from the almost prescient aesthetics of Frey's original art to the personal connection stemming from old family footage of Mazinaw Lake. 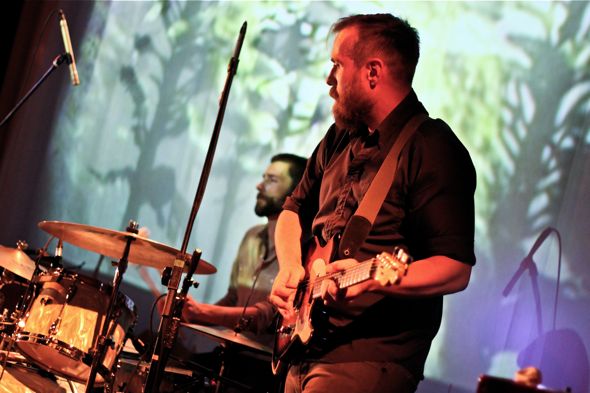 Perhaps the most triumphant part of the show came during the second last song of the main set, "Cabin in the Burn." As the band reached the track's final refrain, probably the most bombastic moment on the album and by turns both mournful and rousing, Frey lit off sparklers, thrown into looming perspective against the stage. Confetti fell from the rafters, the celebratory gesture again seeming to hint at the notion of hope as response to the inexplicable gap death leaves in its wake.

The sensory overload was turned on its head when Bonnetta returned to the stage alone after a short encore break to sing the new album's title track. Like a pastorally-inclined Mark Kozelek, Bonnetta's songs are just as affecting stripped to the bare essentials: his voice and a guitar. His lack of musical accompaniment on the song didn't affect the strikingly clear image it conjures; hiding little behind metaphor, the lyrics of the song paint a picture of his father "watching spectral dusk settle in on Mazinaw Lake." One could imagine the extremely personal subject matter being an issue for Bonnetta, but he nonetheless commanded the stage like a man possessed as he sang in his honeyed tenor.

Airing out and universalizing a work like Spectral Dusk for public consumption can't be an easy task, but the group were all smiles between songs, Bonnetta repeatedly thanking the audience for spending the Friday evening hearing songs more suited to "rainy Monday afternoons." The crowd, seated and packing the floor, didn't seem to mind, either; the wild applause between every song was proof of Bonnetta's success at universalizing the material. The album comes to life in a live setting, and Frey's projections only further enhanced the connectedness between band and audience. SummerWorks may have been winding down as the weekend approached, but the album release show served as a welcome reminder that a little company can go a long way. 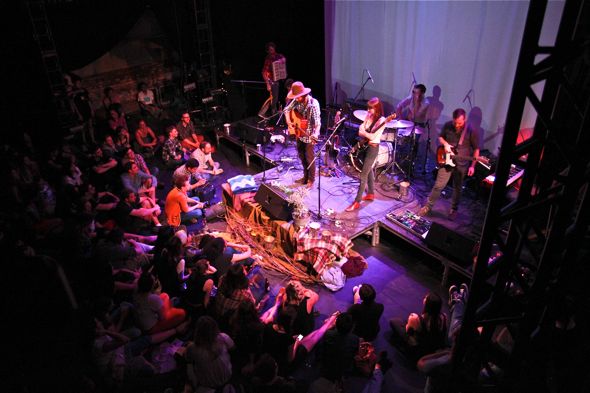