This weekend, Downsview Park hosted VELD, Canada's largest electronic music festival, spanning two days and featuring 30 DJs spread across three stages. Bringing the thrills and bass of EDM out of the clubs and into the midday sunshine, the lineup included electronic up-and-comers Ben Gold and Abdecaf as well as international headliners deadmau5 and Avicii. 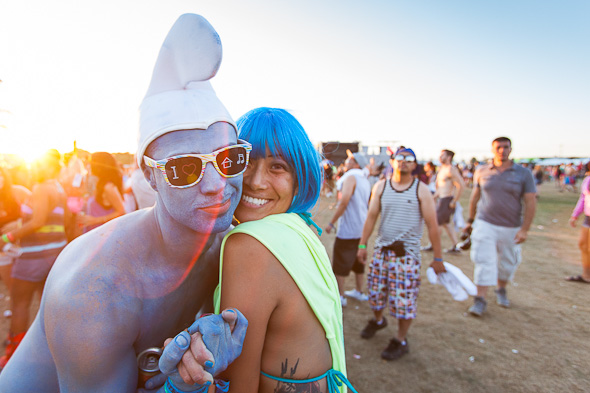 Saturday saw temperatures soar to a very-humid 30 degrees. Luckily, EDM calls for as little clothing as possible (as long as it's neon, of course), so bikini tops, butt-skimming skirts, and tight mesh swept across the span of Downsview Park's open field of an estimated 50,000+ electronic dance music fans. (Sidenote: a veld is an open, uncultivated land, and Downsview fit the profile flawlessly). 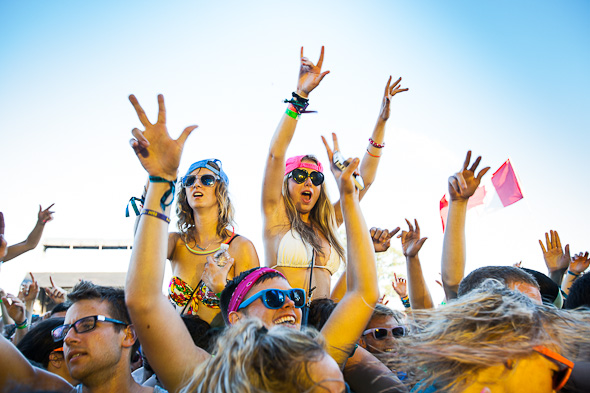 Steve Aoki
The crowd grew exponentially as California-based sensation Steve Aoki took to the stage in the early evening. Having been warmed up by earlier DJs Michael Woods and Chris Lake, festival-goers kept the party vibe high, jumping and fist pumping to the beats of Aoki's remix of Kid Cudi's "Pursuit of Happiness."

Near the end of his set, he grabbed an inflatable boat and threw himself into the crowd, giving new life to the tried-and-true art of body surfing. With his impeccable stage presence hitting somewhere between DJ and circus performer, it's easy to see why Aoki is this year's highest grossing dance artist in North America so far. 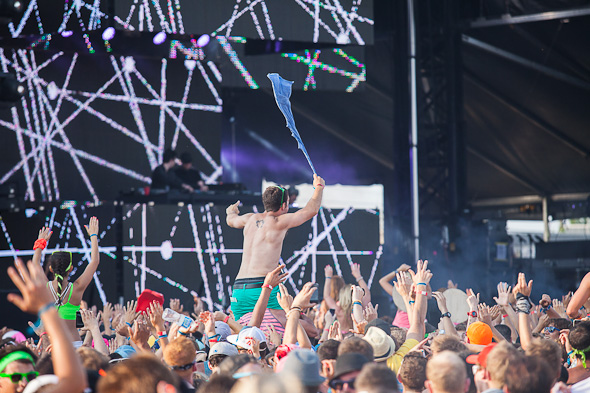 Knife Party
Seizure music duo Knife Party took over for Aoki playing to a stifling, sweaty crowd still screaming for more bass. Between VELD, Montreal's Osheaga, and a breakthrough moment for their song "Bonfire" on Sunday night's episode of Breaking Bad, Knife Party stock is certainly on the rise.

I expect to see more big things from them in the near future, so be prepared for more Overly Attached Girlfriend meme-themed signs at the next EDM festival near you. 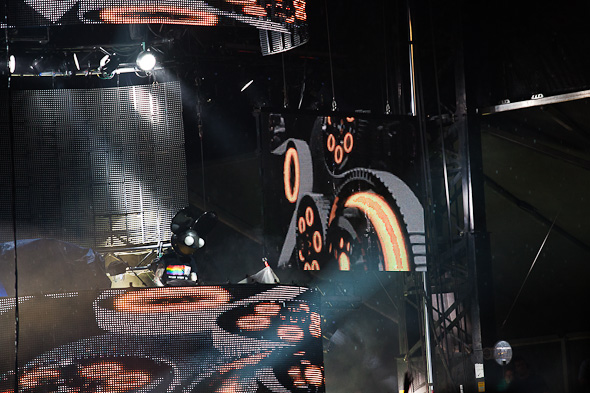 deadmau5
Rain poured down just before Canadian headliner deadmau5 took to the stage, thrilling the 25,000+ fans that decided to stick around. And despite the lightning storms and damaged equipment — he tweeted "damn rain fucked up a ton of shit, but whatever, that was fun!" — deadmau5 amped up the bass and spun hits like "The Veldt" and "Cthulhu Dreams."

Superfans who had created their own mau5heads were seen scattered throughout the sizeable crowd. Fans splashed around in the mud and were left wanting more. Luckily, deadmau5 played another set at the Saturday after party at the Guvernment. 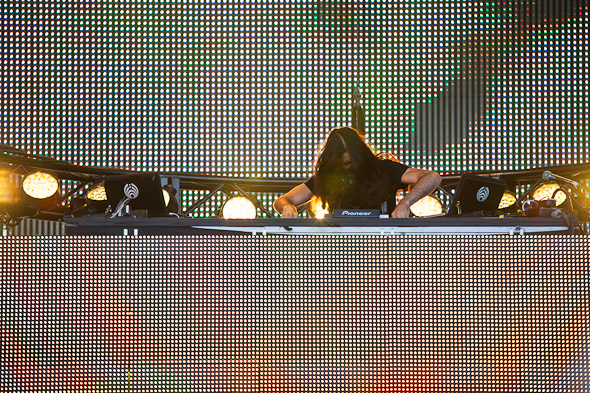 Bassnectar
The skies broke on Sunday afternoon, letting in the sunshine while Mord Fustang took to the stage. The ground was soft and so were fans: the mood was a little more laid-back than it had been during the Saturday sets. But as the sun went down, the crowd became a sea of never-ending fluorescence.

As Bassnectar amped up the energy with Empathy some of the ladies apparently started overheating - maybe it was the long, luscious locks atop Bassnectar's head but the tops were coming off and the breasts were coming out. Sunday's laidback morning immediately became an evening of alcohol and EDM-influenced exhibitionism. 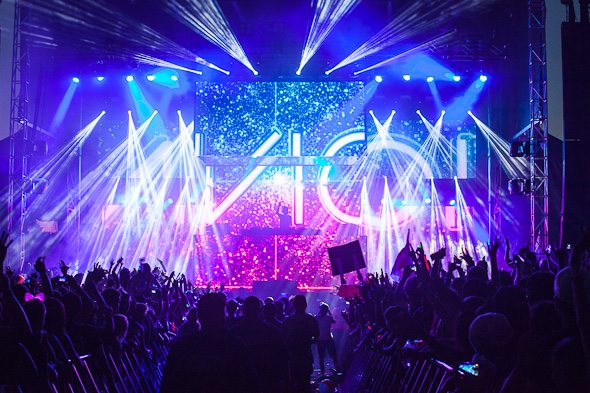 Avicii
Not a spot of grass was uninhabited as remix-master Avicii began his set. Even after two full days of drum and bass, fans pounded the grass and screamed out whatever was left of their vocal chords. Dropping remixes like "Fade Into Darkness" and original hits like "Levels," Avicii closed the festival with a bang — no thunder necessary. 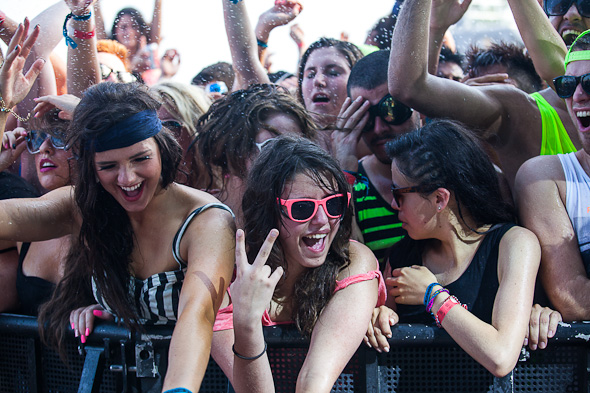 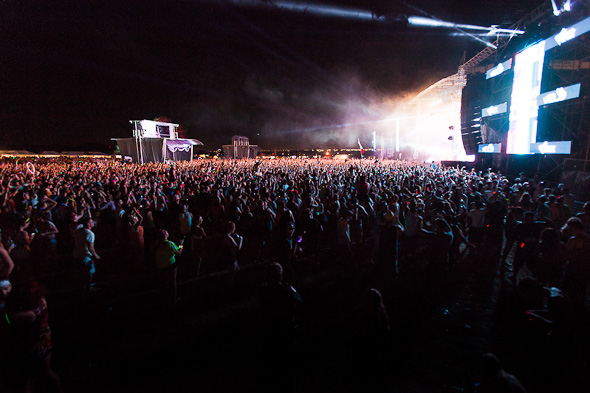 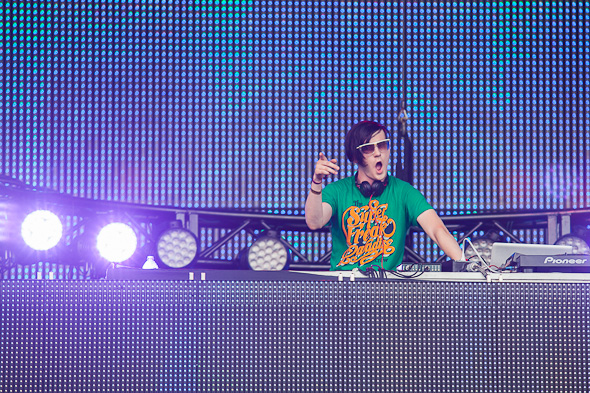