Late last week I met with Broken Social Scene co-founder Brendan Canning in a small park south of the entertainment district. If the setting wasn't casual enough, he showed up carrying a mug of coffee he had just brewed at home and any nerves I had going in were quickly eased.

With a recently released album from his new/old band Cookie Duster, and a recently announced gig scoring The Canyons starring Lindsay Lohan, Canning hasn't had much downtime since BSS played their last show in Rio de Janeiro in December of last year.

The resurrected band features Jeen O'Brien, Damon Richardson, Matt Murphy and Ian Blurton for their second release through Maple Music, When Flying Was Easy. Recorded from 2007 onwards — though the songwriting dates back more than a decade — the record is undeniably tinged with a 90s pop sensibility. It wouldn't be hard to imagine the lead single, Two Feet Stand Up, included on the Empire Records soundtrack.

I chatted with Canning about the various projects he has on the go, the perils of being pampered, and the rigours of touring.

When Flying Was Easy was released on June 12. When did the writing begin?

The songs that appear on this record were written from 2007 onward. It was really done piecemeal whenever we had a free week. Not everyone that played on that record has even met. For example Jeen has never met Matt and Rob Higgins who played bass on the single has never met Jeen. My friend Edwin is a really talented dude who played some violin on the record, and also did some Broken Social Scene stuff, he definitely hasn't met a lot of people that played on the record.

Paul Aucoin recorded a vibraphone part on the song "We Step on Glass" in 2000 or 2001 but it was just the one track and we never had a completed vocal on it but I really dug the tune. That was one of the earlier ones that Jeen sang on, and I was really convinced that we should keep writing with her. I liked her vibe — she's cool. She has three kids and lives in Stratford. We're a very un-rock and roll story.

Any plans for a tour or live shows?
The plan is to do some shows in November. There were a lot of organizational situations with Broken Social Scene so to jump back into it seemed a tiny bit...not where I wanted to be right away. I'm looking forward to playing the tunes, but it's like getting back on a tricycle. I also enjoy not playing gigs. I shudder when I see people loading amplifiers into nightclubs. I look at them and think "Oh! god!".

...hopefully that feeling will pass by November

You have to at least put a date out there somewhere so you can mentally prepare yourself. Who knows what this one show will lead to? Maybe people will want more shows. It's really unwritten right now.

Perhaps less stressful than taking a huge collective like BSS on the road, though?

It would actually be a six piece on the road, so we'd still need a tour manager even though there wouldn't necessarily be a tour, and I just don't wanna be that guy anymore. I would rather have a little bit of help. We were in a bit of a privileged position with Broken Social Scene where we'd have a strong staff of people who were there to help. You do need it... then you become a diva. So when you cross that threshold there's no turning back, sad to say. 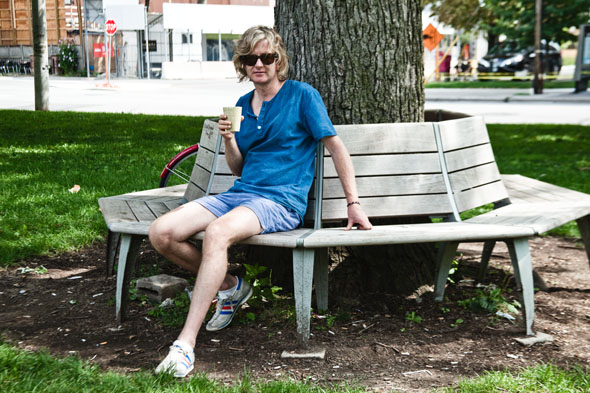 It was recently announced you'll be scoring The Canyons. How did that happen?
I'm working with a new management company in Los Angeles who wanted to release the Cookie Duster album. Like any label, it's a one-stop-shop kind of thing, and they had set up a bunch of meetings for me to meet with the music supervisor of The Canyons. So I went down to LA for a week and met with Amine Ramer and one of the other producers and just kind of pitched myself and they pitched me.

You're no stranger to scoring films — e.g. Scott Pilgrim, Half Nelson, Snow Cake — of course, but what drew you to this script?

I read the script, and I just really dug it. I like Bret Easton Ellis, I like American Psycho...I can't lie and say I've read anything else, but I really enjoyed that book, just for the humour and the depravity of it all. And this is a pretty depraved kind of script, and you know, lots of dirty stuff. When I was reading the script I was kind of imagining how the music would go and I've never really had that happen before.

Have you seen a rough cut of the film or anything?
No! Normally, when you're doing a score for a film you do have a rough cut or you've at least seen some scenes. But just reading this script and talking with the director (Paul Schrader) got me excited. The guy has written heaps of films...Taxi Driver and Raging Bull among them. I went home and watched a bunch of his older films like Light Sleeper and American Gigolo with Richard Gere, and that's a really cool film. So you know, it's a privilege for sure. It could be a really good movie, and hopefully I'll do a good job.

Last thing you cooked? Grilled veggies and sausage from Sanagans.

What distracts you while you're on stage? My brain.

Aside from being holed up in a studio working on The Canyons score, Brendan Canning can be found DJ'ing one Saturday a month at The Piston.