Eight and a Half played intimate show for inTO series

Toronto indie supergroup Eight And A Half played a set amidst a mess of couches, finger foods and free drinks at local restaurant Kitch last night. The intimate concert and interview was the kickoff for a series called inTO, which are monthly events focused on bringing Torontonians closer to local arts and culture. It's an ambitious idea, to be sure, and it made for a totally unique night out in the city, if nothing else.

Despite everyone rushing forward for a better look at the band as they performed, the venue wasn't packed; wait staff had little difficulty working their way through the audience to bring out snacks. That lack of a claustrophobic, drowning-in-a-crowd feeling, combined with the ample seating, really underscored the difference in a show like this from my usual concert experience--having someone's sweaty arm jammed into my chest as I try to work my way through Lee's Palace to get a drink. 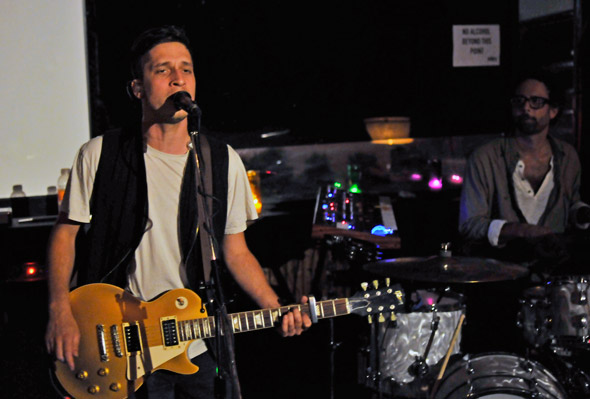 Eight And A Half played a short set, starting with "Two Points," one of the most interesting B-sides from their self-titled album. Drummer Justin Peroff (formerly of Broken Social Scene) shines on that track, and really delivered live. It was great to see a set heavy with the more subtle, engaging portions of their album; singles "Go Ego" and "Scissors" almost seemed like afterthoughts, and singer Dave Hamelin (formerly of The Stills) seemed more interested in telling the audience the story behind "Walked Into Diazepene," another crowd favorite. 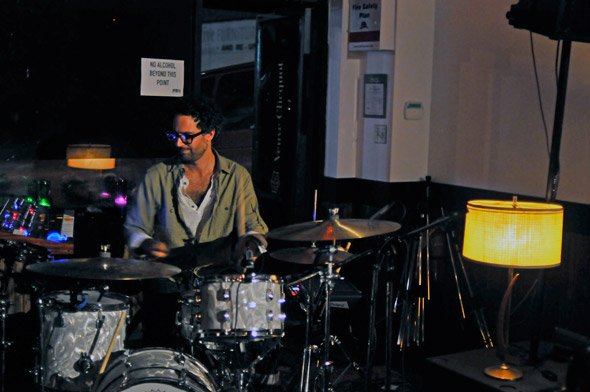 After their cover of the Walkmen's "What's In It For Me," Eight And A Half sat down with
Jeffrey Remedios, co-founder of Arts & Crafts Records, and CityTV's Mary Kitchen for a short Q&A. I'm not sure they were that into answering the questions, but the band opened up a bit when asked about--what else?--their favorite music. 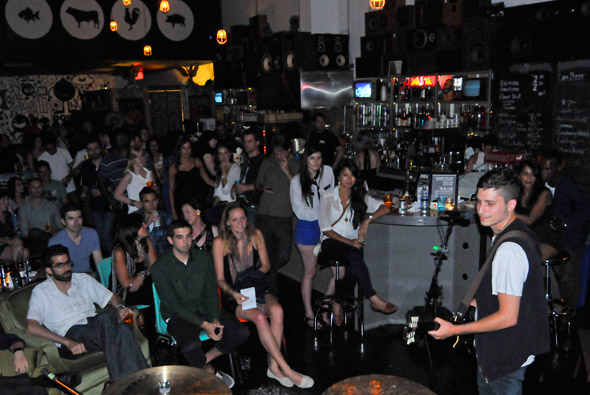 In particular, I found it telling that when pressed to come up with a lineup for a hypothetical festival, Justin Peroff chose Explosions in the Sky; Dave Hamelin chose the The Smiths; but keyboardist Liam O'Neil chose experimental pop auteur Micachu. With other comments they made, these choices helped make it clear that this group isn't just made up of some of the most talented musicians that currently call Toronto home, but more fundamentally, it's a group that's made up of music fans, actively engaged in finding and disseminating interesting work, and I think that's what made them the perfect choice for this inTO series.

I last saw this group at NXNE, and was impressed with how well they transferred the ethereal texture of their recordings to the pseudo-festival environment of Yonge-Dundas Square. Coming into this, I was very interested to see them adapt to a smaller venue. And apart from a small technical problem with the band's snare stand, the night seemed to go off without a hitch. The band played well, the food was delicious, and the drinks were plentiful. 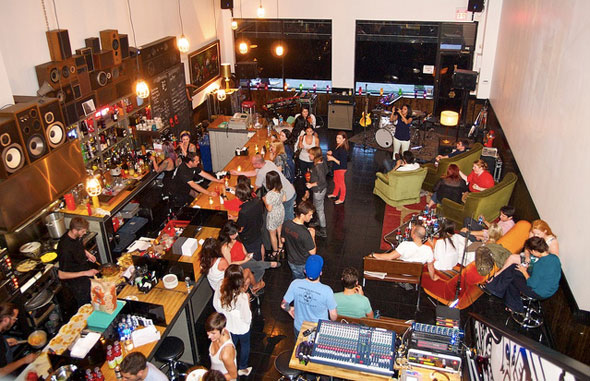 Eight And A Half are already booking big shows, playing festivals in support of their new
record--next is at the Wolfe Island Festival, near Kingston--but watch for them when they play in Toronto next; this is a group that's picking up steam, and I don't think anybody at Kitch walked away disappointed last night.

For more photos of the Eight and a Half show, visit rockitpromo's Flickr set. The inTO series will continue in about a month's time; check back with their website to find full details of that event, when it's posted.