Edgefest 2012 in review: The Balconies, The Coppertone, The Darcys, Silversun Pickups, Death from Above 1979

The gates opened at 11am and people started to stream into Downsview Park already dizzy from the summer heat for Edgefest 2012. Temperatures soared to 31 degrees, but it felt much warmer for most of the audience, who were left to bake in the heat under a cloudless sky for much of the day. 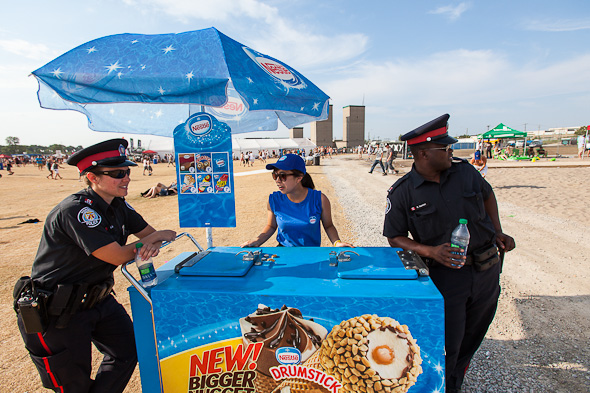 Headliners Billy Talent went onstage after Death From Above 1979, The Sheepdogs, and Silversun Pickups. While at first blush, this seems like an interesting mix, long waits between sets and a lack of presence from some of the acts made the main stage feel a little disjointed. This was in comparison to the other stages, where organizers kept the bills flowing a little more naturally and the eclecticism of acts felt like... well, like a real music festival. 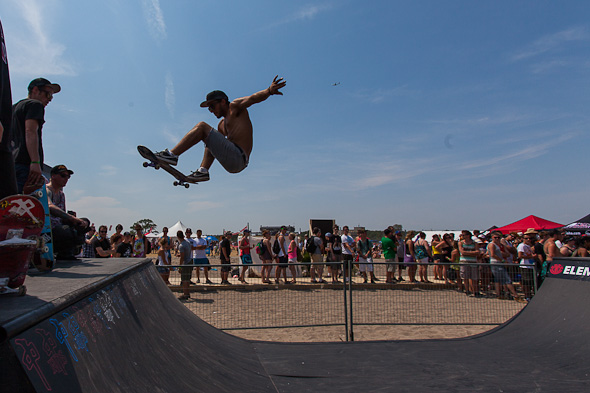 This year marked the first time Edgefest included an electronic stage — more of a tent, really, and a small, hot, and stuffy one at that. Still, the bill was interesting — from newer acts like Jay Fay to more established DJ's like Jesse F. Keeler of MSTRKRFT and Death from Above 1979, it showcased a mix of talent from near and far, both up-and-comers and those with long resumes. 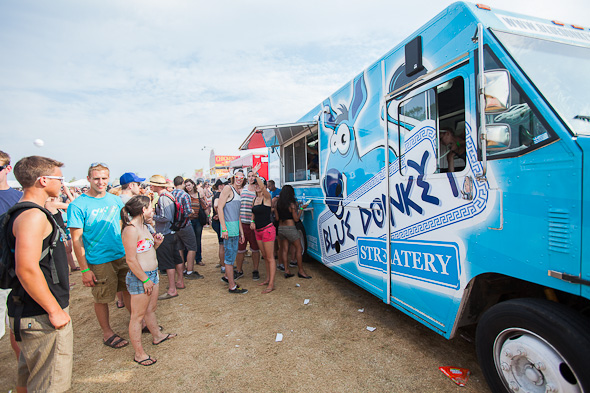 The real action, however, was at the side stage this year. With acts like The Darcys, Whale Tooth, The Coppertone, and The Balconies providing an eclectic, fresh and fun mix of artists for an audience who pretty near arrived burnt-out from the heat. Veterans Library Voices played just before headliners Yukon Blonde, anchoring the lineup with road-tested sets. I caught part of Library Voices' set, and they were rocking out pretty hard. 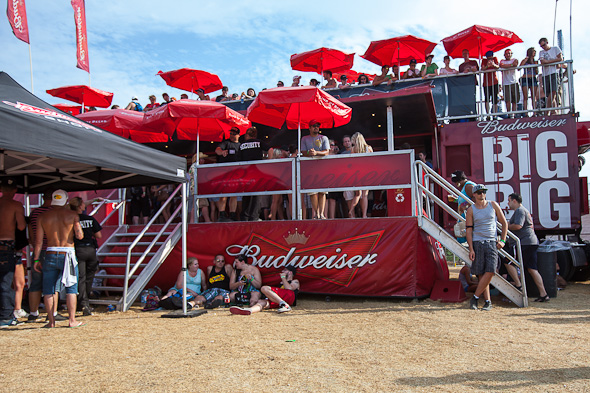 As another plus, the side stage was right next to the only water-filling station in the park, where, if you waited in line for 15 minutes or so, you could fill any container you had with cold water. A nice perk as bottles were $3 — but, if you (the promoter) are going to pay for one of those carts, why not pay to have two or three scattered around the venue? 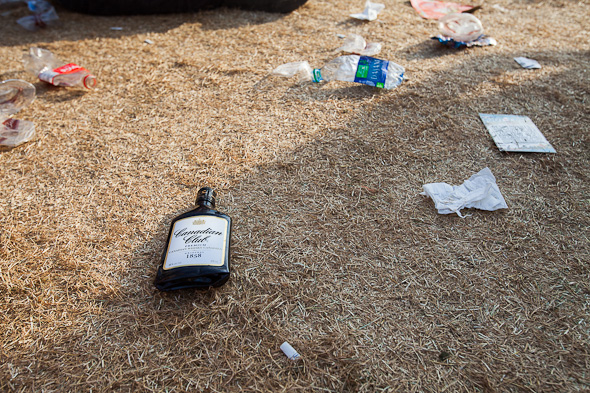 At events like this, it's common to see set overruns and stage management issues cause delays pretty quickly. Edgefest went really smoothly, though, apart from some final changes made to the schedule the morning-of — that's why we don't have a review of JFK's DJ set. 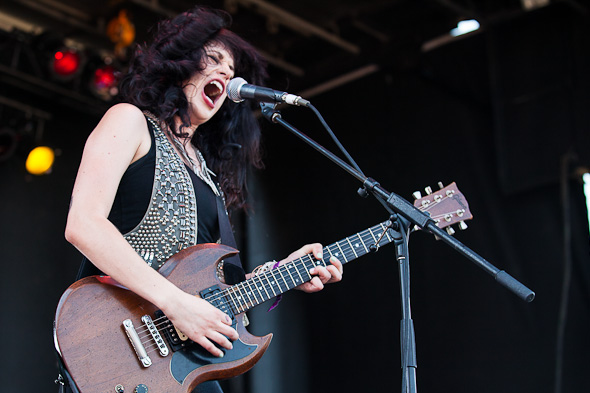 Despite having seen the Balconies several times in the past, and having not been impressed with their previous performances, the band's Edgefest performance seemed a ninety degree turn in my perception of the band.

A major factor in my change of heart was the performance of frontwoman Jacquie Neville. Neville put together a captivating performance as she channeled a young Angus Young — head banging, wildly strumming and Chuck Berry duck walking across the stage. It's just a shame that the crowd gathered at that point near the side stage was modest. 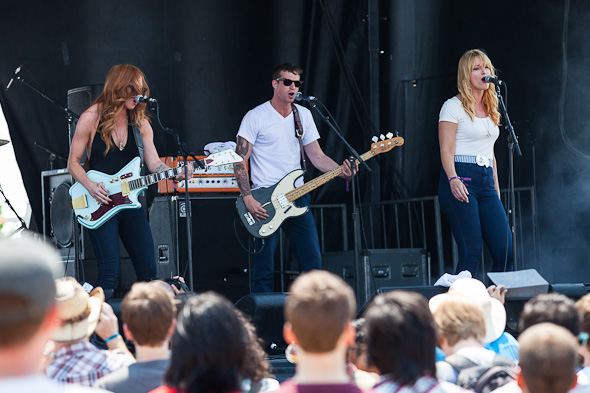 The Coppertone was an act that I became aware of before NXNE, but didn't get a chance to see until Edgefest; I'd heard great things, and they did not disappoint. Frontwoman Amanda Zelina led the group — one of the most vicious, fuzzed-out blues bands I've ever seen — with a great presence, delivering rough, raw vocals and wild slide guitar solos with abandon and confidence.

The Coppertone hammered their way through several tracks from their debut, 2012's Hymns For The Hollow; I was very impressed by the range of the group. I think songs like "You're The One" show this band at their best, big singalong choruses and air-guitar-worthy riffs.

Facile comparisons to other fuzz-blues revivalist groups are bound to happen as The Coppertone build up more steam, but I think their torn-speaker sounds and furious stage show are both strong enough to warrant a close listen. 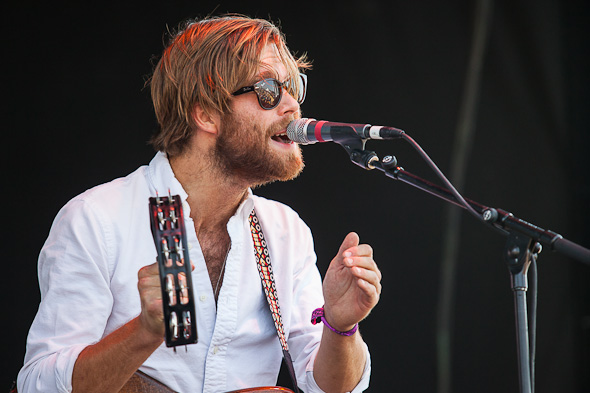 A small plastic cup of beer was $8 at Edgefest, and the choice of beer was rather limited: Budweiser and Budweiser Light were the only two choices. If that seems like robbery, it was, and, in some ways, the price and choice of beer seemed emblematic of the entire festival. That said, I could stomach everything being overpriced, but something about the genuinely interesting and compelling bands being only given 20 minute sets seemed like actual robbery.

Case in point: The Darcys early afternoon set at Edgefest's side stage. The band played "House Built Around Your Voice" before dedicating their cover of Steely Dan's "Peg" to "to all the parents kind enough to bring their kids to Edgefest," a joke that only my colleague and I seemed to get. After playing "Shaking Down the Old Bones" and "Edmonton to Purgatory" The Darcys' were done their set, so after only four songs one of the best up-and-coming bands playing the festival was done. 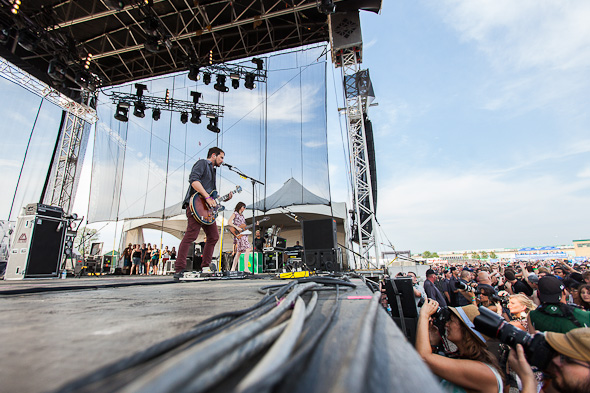 If things were grim after the Darcys, then the festival took a comedic turn with Silversun Pickups. Before their set, we were hiding from the bright afternoon sun inside the media tent, and scattered among the other media types and musicians was a person who had the gait of someone who had way too much to drink too early in the day. It turned out to be the lead singer of Silversun Pickups, Brian Aubert.

When Aubert and company took the stage, the frontman introduced his band as "Sex bob-omb," and he would go on to call the band by that name several more times. Miraculously, despite his drunken rambling and sloppy guitar playing on songs like "Lazy Eye," Aubert managed to keep his shit together and finish the set. If the rest of the band was embarrassed by his antics, they were either used to it or too far away for me to properly judge the sour expressions on their faces. 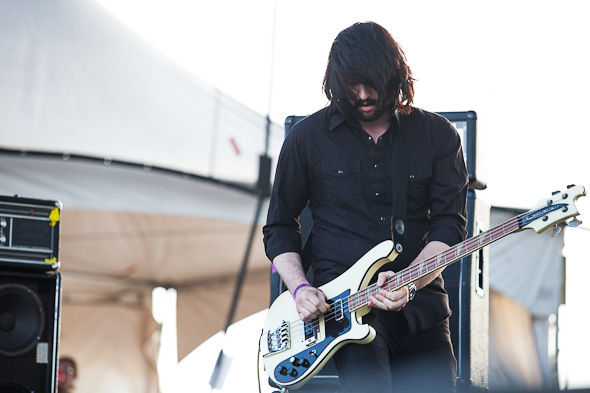 The furious immediacy of their music was at odds with their stage banter, with drummer Sebastien Grainger and bassist Jesse F. Keeler genuinely seeming to have fun in front of the crowd. After shout-outs to their respective GTA hometowns, Scarborough and Mississauga, the band joked about things like Toronto mayors — past and present — and the T-shirts that members of the audience were wearing (or not, in some cases) — all of it delivered all with an ease I wasn't expecting. 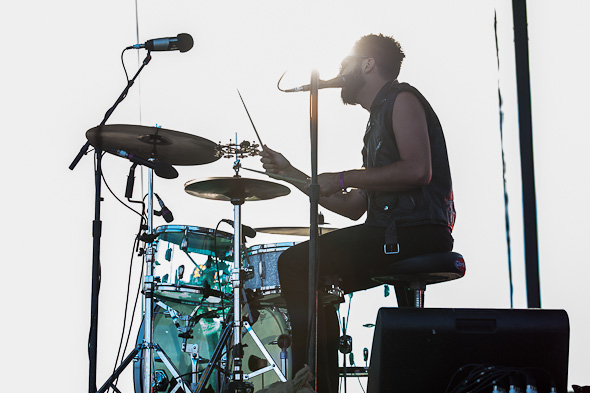 Death From Above 1979 acrimoniously broke up years ago, but after a cryptic blog post last year, they came back to the project and started booking gigs. Both members have garnered their share of critical and commercial success outside of DFA1979, Keeler in vocoder-heavy DJ group MSTRKRFT and Grainger alongside his band The Mountain, but they keep coming back to Death From Above. 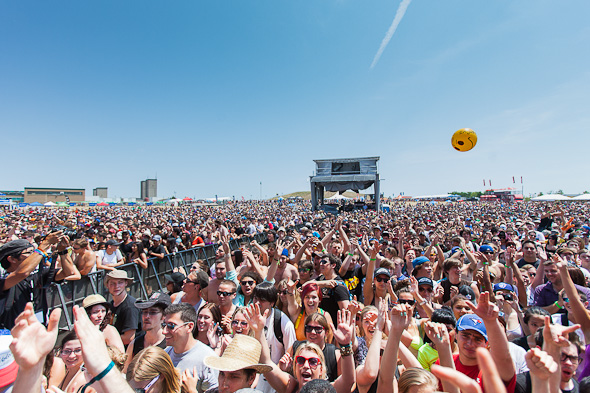 I think they even showcased some new material. The song was punchy and fast, with a chorus featuring drums reminiscent of their breakthrough single "Romantic Right," but with a very distinct vocal melody that I haven't heard from the group before.

There's no official news of an album or even another tour in the works, but the fact that the group's playing new songs — and that they're good, very much in the vein of "classic" DFA — should come as a pleasant surprise for anyone who's ever put on "Romantic Rights" and just, y'know, freaked out.

Which is, I think, almost everybody who's ever heard the group.

With contributions from Adam Brady and Igor Bonifacic. Photos by Brian Morton.