Beirut show their chops at the Sound Academy

Thursday night saw Beirut make a return engagement to Toronto in support of their masterful third album, The Rip Tide. Following two shows at the Phoenix last August with one-time collaborator Owen Pallett this summer's visit saw the band poised to tackle the formidable challenge of the cavernous Sound Academy - no small feat as anyone who has seen a sold out show there knows.

Zach Condon and his gang of impeccable musicians more than rose to the challenge, delivering a note-perfect set that would've made the best conservatory players blush, at least a little. The widely diverse crowd responded in kind, giving the fresh-faced Condon a hero's welcome with handclaps and euphoric dancing a-plenty. 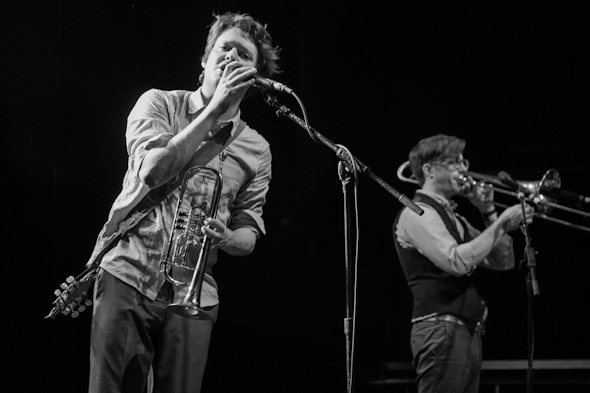 Beirut's music has always been an interesting hodgepodge of traditional world music - specifically, the brass-tinged folk of the Balkans region with the restrained bombast of classic French pop thrown into the mix - filtered through the lens of modern indie rock. While Condon's musical appropriation has always clearly been done with the utmost respect for these well-traveled influences, as he has aged and acquired more studio experience and road time, Beirut has developed into its own singular entity - after all, Condon was only 19 and without a full-time band when he released his first LP, 2006's Gulag Orkestar.

The Rip Tide simultaneously sounds more familiar and yet invites fewer touchstones from where their sound is cultivated, placing increased importance on superior melodic sense and mature songwriting, as opposed to any specific style that caught Condon's whimsy at the time.

As expected, the tracks that were aired out from The Rip Tide were some of the show's definitive highlights, and, like much of the set, were received rapturously by the audience. "Santa Fe," which, on record, tones down the usual let's-add-horns-because-there-can-never-be-enough factor, was bolstered by unexpected trumpet bursts throughout courtesy of right-hand-trumpeter Kelly Pratt. Similar slight deviations from recorded material abounded throughout the show, but never in a way that was reductive or jarring to the studio versions. Instead, minor change-ups like the stomping percussive march that drove "Nantes" were just the right amount of sonic variation that gives live music in general its appeal as a new take on the familiar. 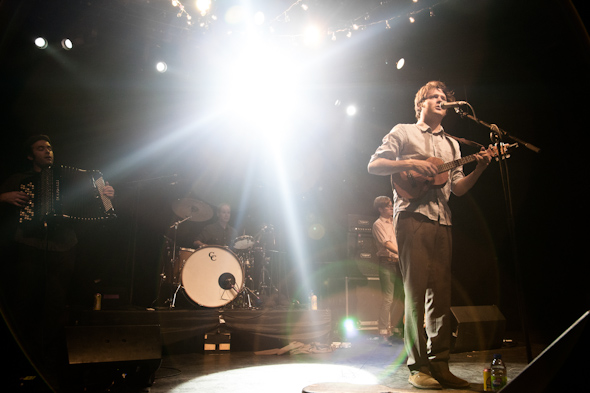 Condon's sonorous voice, a rich warble integral to the group's sound, seemed to be spot-on all night. However, this has to bring me back to the trappings of the venue. Sure, every Torontonian ever has taken easy potshots at the Sound Academy, but the sightlines towards the middle and back of the crowded floor make one wonder if the stage designers had intended to allow patrons to see the performers at all.

Kudos to the soundman who had the formidable task of balancing the mix for the sextet, as instrumentally everything was clear, crisp, and vibrant, from the subtle upright bass to Condon and Pratt's oft-dueling trumpets. Condon's voice, however, was often drowned out in the controlled cacophony, caught in the mid-range with few dynamics. For a singer whose words are difficult enough to distinguish already, the muffled treatment made it near incomprehensible.

All that said, Beirut put on a great show, regardless of venue issues. The band has clearly been working steadily towards maximizing each member's musical input without sacrificing Condon's vision. The group was gracious and vocally thankful throughout, with Condon's constant accolades towards the audience being one of the few audible selections of banter during the show. The last of these consisted of Condon thanking the crowd for "participating in a lullabye."

He then proceeded to transition from ukelele and trumpet to piano for the night's last song, "Goshen." The audience swooned as the band turned its usual sound on its head, trading in their complex orchestral tendencies for a simple, affecting piano ballad. This lack of incongruence is testament to the band's skills as arrangers, and sent the crowd home having exhibited another side of their multifaceted sound. Now let's see them at Massey Hall. 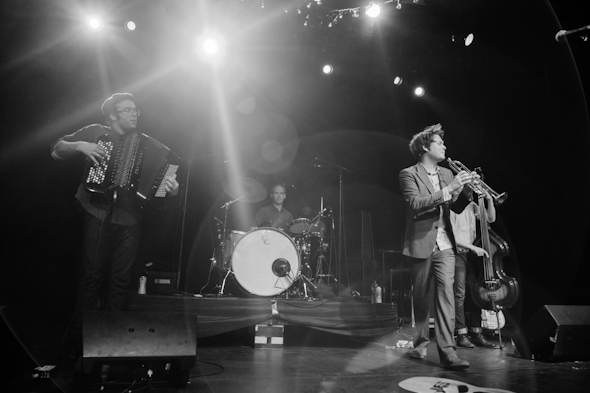 The Penalty
After the Curtain
The Gulag Orkestar
Goshen