The Flaming Lips do it all at Yonge-Dundas Square

Unabashed, psychedelic good fun. That's not even a sentence, but that's how I would sum up the Flaming Lips' free show at a completely packed Yonge-Dundas Square Saturday night for NXNE. Like everyone else in the crowd, way into the thousands, as soon as those confetti canons went off and frontman Wayne Coyne was in his "zorb" bubble crawling atop the crowd, I was all smiles.

After waiting for an hour to squeeze into the beer section and an extensive pat down, the stage resembled a forthcoming party zone. A massive disco ball overhead, dangling streamers and about 30 huge-ass coloured balls to the side. I could also make out a human-sized green alien standing to the side. Odd, but not out of place at a Flaming Lips show. 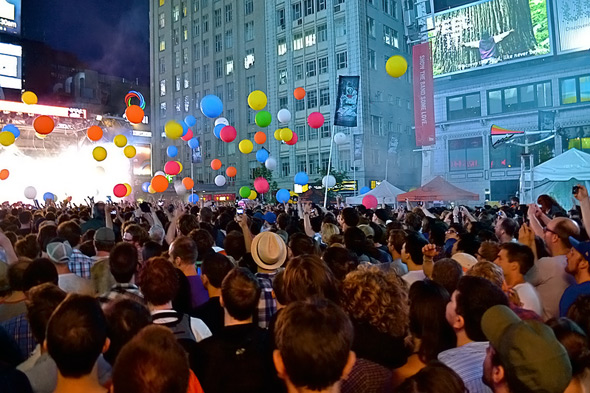 The show opened with the screen projecting a topless woman dancing to something akin to psychedelic '70s graphics. It then zeroed in on her light-producing va-jay-jay (vagina). As the zorb bubble - a human sized translucent hamster ball - was being blown up with Coyne inside, the band then appeared through the woman's lady bits, as in, through the backdrop. Are you with me so far? This is just the start.

With Coyne inside the now-blown-up bubble boy ball and a massive unleashing of confetti and those giants balls, it was sensory overload. As Coyne maneuvered atop the audience, he really seemed to be enjoying himself, although he could only really crawl as walking looked to be trying, which is fair when you're crowd-surfing in a giant hamster ball. 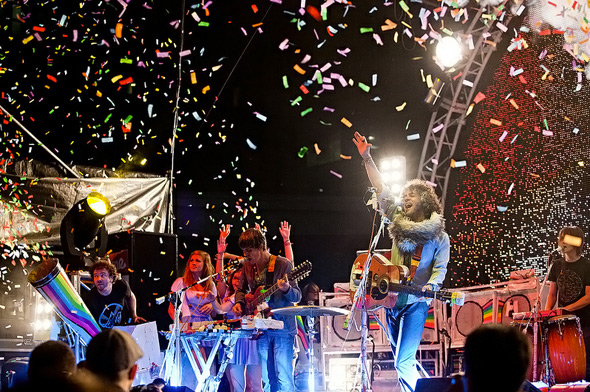 The Flaming Lips' music, what I would best describe as alternative psychedelic space rock, if that means anything to anyone, complements the performance. If anything, many know their more accessible songs, like "Yoshimi Battles the Pink Robots Pt. 1" and "Do you Realize??" but more importantly, that they put on you-need-to-see-them-before-you-die shows. Their stage shows precedes them almost, as girls dressed a la Dorothy from the Wizard of Oz dancing around and smoke-producing megaphones should, I guess. It was more about the art performance and the swirling rumours about Radiohead showing up.

After a couple songs in, following the lovely "Yeah Yeah Yeah Song," Coyne acknowledged that a number of the crowd members were probably going to the Radiohead show that night. "All of our good thoughts and karmic good vibes go to the Radiohead guys," said Coyne, before adding: "This song just says hold on as best as you fucking can" and jumped into Radiohead's "Knives Out" as a tribute. 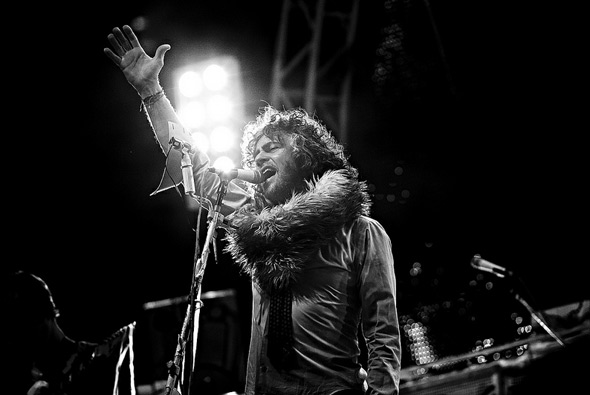 Coyne called on the audience a number of times to let loose. "Come on! Come on! Let's go crazy! Let's feel good," he seemed to say as a refrain. The audience was involved, but he clearly wanted more from them. It was all an attempt to bring good cheer, especially after the tragic news of the Radiohead stage collapse at Downsview Park, killing one.

With a couple short lulls in the show during some of the longer psychedelic breakdowns, Coyne always had a way to pull the audience back in. Like bringing out his massive hands that shoot laser beams out of the palms. He would shoot the lasers off that aforementioned disco ball deflecting the beams all over the place. It was like, I would presume, being inside Wayne Coyne's head.

Closing with "Do you Realize??", one of the band's more accessible songs, which is actually about guitarist Steven Drozd kicking a heroin addiction, the last of the confetti, which is to say a shitload, was unleashed into the air. With muli-coloured confetti filling the sky above Yonge-Dundas and everyone singing along, I was off to see The Lumineers at the Horesehoe.

Photos one, three and four by Ryan Kelpin. Second photo by Cameron McLellan.