Roger Waters brings The Wall back to Toronto

Giant puppets, pyrotechnics, and a wall spanning the entire stage of the Rogers Centre - needless to say, this was no run-of-the-mill rock show. Despite having begun his massive, technologically groundbreaking restaging of Pink Floyd's 1979 opus The Wall with three nights at the Air Canada Centre in 2010, bassist-songwriter Roger Waters saw it fit to expand the spectacle to stadium proportions this time around. 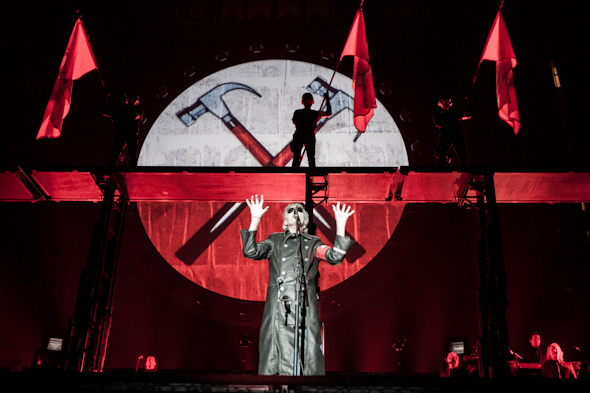 While the music component of the show remained unchanged - it's a front-to-back performance of The Wall, embellished with an 11-piece band and a crew at least double the size - the projections and stage show were upgraded to suit the gigantic space in which Waters & Co. would be performing. 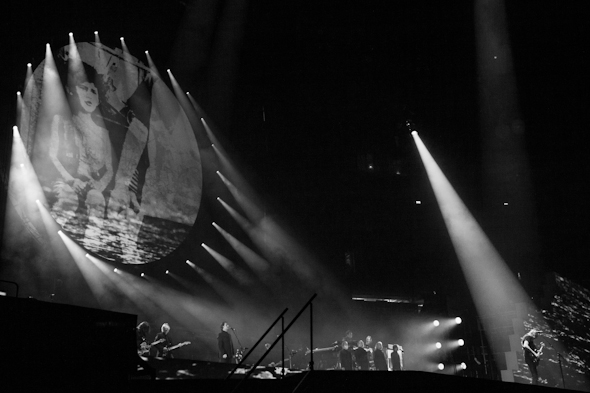 Walking into the Rogers Centre, it was tough not to gawk at the stage setup before the show had even begun. The wall took up most of the front of massive stage, leaving the centre-back portion free for the band, as impeccably rendered projections flared not only on the giant circular screen behind the band, but also on each side of the wall being assembled. Throughout the first act of the show, stagehands filled in the wall, faux brick by faux brick, until there were only three small gaps in which to peer at a few members of the band. 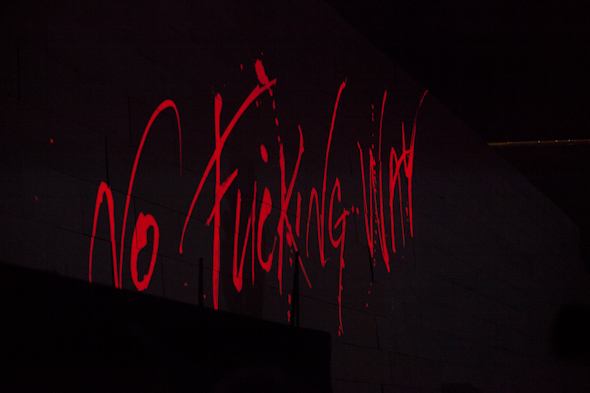 Towards the end of the show, following "The Trial," the wall would come down in a haze of smoke and confetti, possibly the most over-the-top and strangely resonant part of the set. Hearing almost 40,000 people chanting "tear down the wall" was cathartic, and considering the sensory overload overwhelming me from all sides, it was a singular experience that resembled performance art more than any concert I've ever seen. 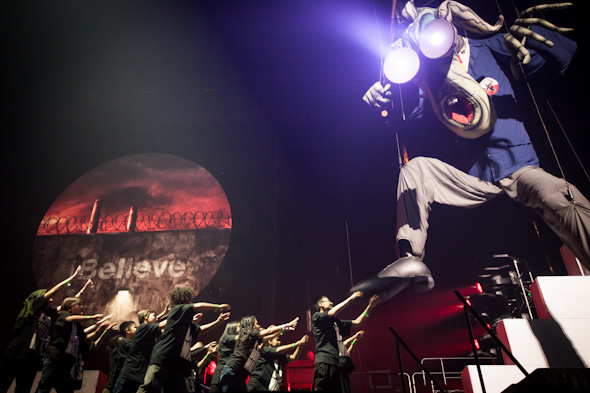 Regardless of prior local performances of the rock opera, a near-sellout crowd was on-hand to take in a full run through of one of the top-selling albums of all-time - no small feat considering some hefty ticket prices amidst an economic downturn. While there was a lack of congruity between the anti-capitalist sentiment of much of the show and the corporate tie-ins necessary to stage a production of this scale, it was clear Waters was intent on giving the crowd value for their dollar. The show ran nearly two and a half hours, only rarely giving the audience a chance to catch up before dazzling with yet another feat of staging wizardry. 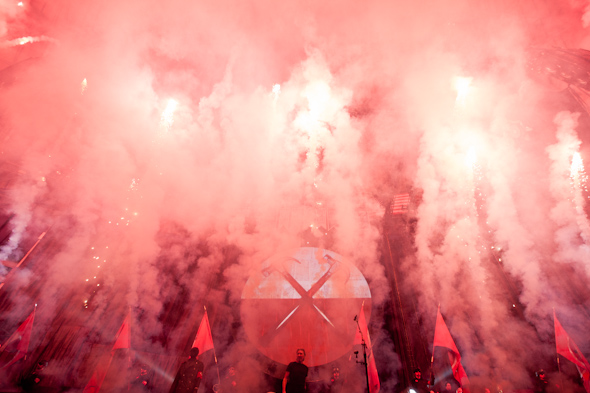 This isn't to slight the musical aspect of the show, though. While The Wall has never been my favourite Pink Floyd album, Waters' backing band - led by original Floyd session guitarist Snowy White and longtime Waters collaborator Dave Kilminster - were spot-on all night, giving extra push to pseudo-ballads like "Hey You" and "Comfortably Numb." Whenever the structure of the album called for it, most notably towards the end of the first half of the show (the two discs comprising the album were broken up by a twenty minute intermission), the band were able to display sonic minimalism as the visual component of the performance took over.

"Goodbye Blue Sky" featured religious and political symbols (Star of David and the sickle and hammer) juxtaposed with the logos of multinationals - Shell, Mercedes, and McDonalds - being dropped from a plane onto the countryside. While Waters' retrospective politicizing of largely non-political source material was at times heavy-handed, it also proved affecting more often than not. 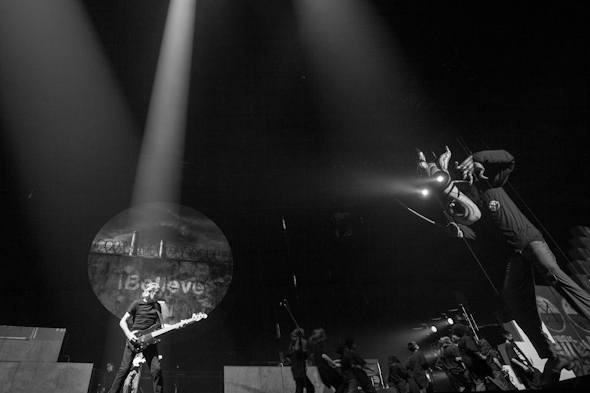 Images and names of soldiers killed in combat washed over the screens during "The Thin Ice," and an additional coda was added to "Another Brick in the Wall (Part 2)," dedicated to Jean Charles de Menezes, a man shot and killed by police after having been mistakenly identified as one of the London tube bombing terrorists. 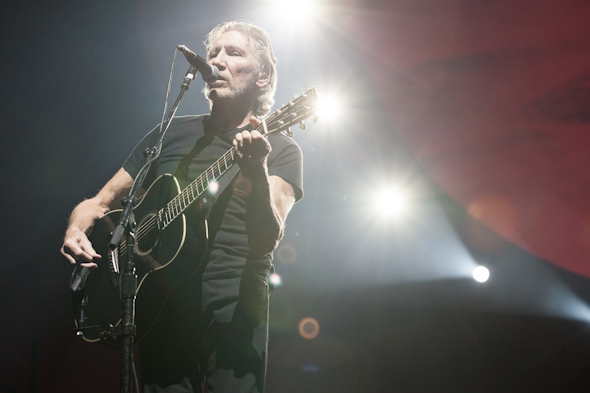 These overtly political moments comprised the few opportunities that Waters took to directly address the crowd, and would prove to be some of the most effective of the entire show. In fact, while the spectacle of the whole thing was worth applauding, some of the more scaled back, intimate moments served as the set's highlights. 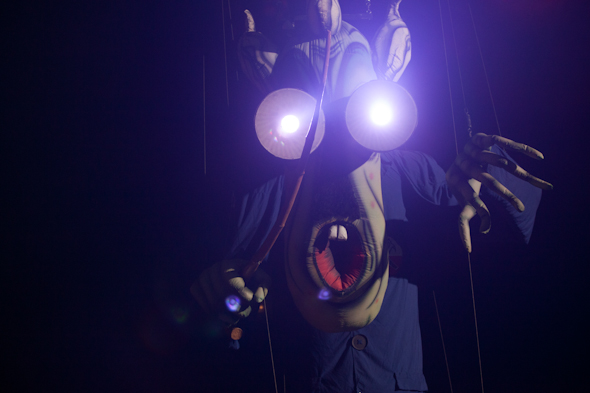 "Another Brick in the Wall (Part 2)" saw a towering schoolteacher marionette descend from the rafters to float above the stage as a local children's choir shouted the song's memorable chorus, but it was "Mother"--the beginning of which featured Waters on an acoustic guitar playing against archival footage of a London concert in 1980--that hushed up the audience of thousands.

While The Wall may have originally been conceived as a piece to lament on his disconnect from the very pomp and audacity that this sort of concert fostered in spades, it seems that self-reflexivity and 30 odd years, have allowed Waters to not only come to terms with his role of entertainer, but bask in it. 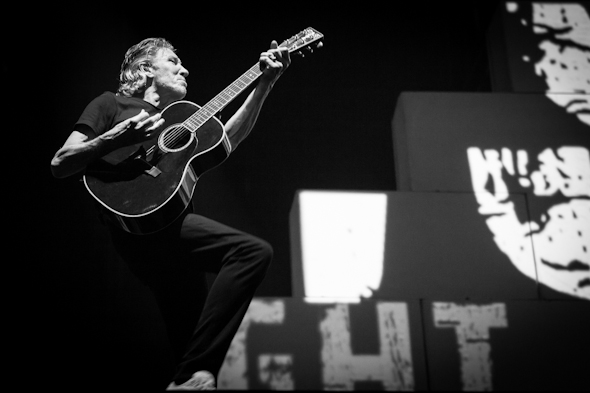 Waters took what can be defined as "concert" to its absolute breaking point, constructing and destructing a spectacle that can only be described as a singular multimedia achievement.

Hey You
Is There Anybody Out There?
Nobody Home
Vera
Bring the Boys Back Home
Comfortably Numb
The Show Must Go On
In the Flesh
Run Like Hell
Waiting for the Worms
Stop
The Trial
Outside the Wall