Matthew Good offers a dose of nostalgia at NXNE 2012

I experienced a sudden, unexpected burst of nostalgia as "K-I-C-K-A-S-S" blared out over Yonge-Dundas Square Friday at the start of Matthew Good's set. The audience clapped along with the cheer-squad recording as Good came out, then they started jumping around as he kicked into 'Giant,' the first track from his 1999 release, Beautiful Midnight.

The crowd was evidently nostalgic, too, responding with mad enthusiasm for a set heavy with hits--'Weapon,' 'Apparitions,' 'Load Me Up,' and 'Hello Time Bomb...' I could go on. 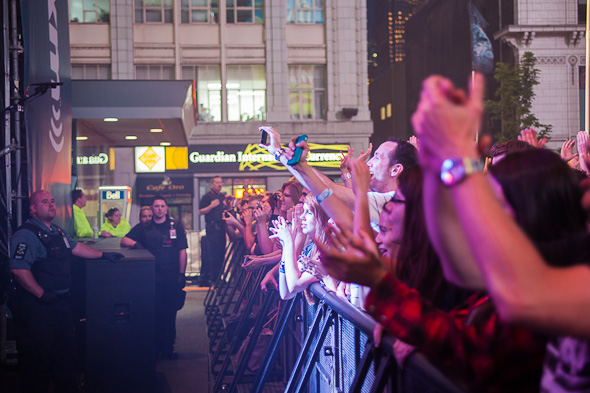 The emotions Good brought up in the crowd were plain to see. People were either dancing, standing awestruck, or singing their hearts out as he crashed through those songs. 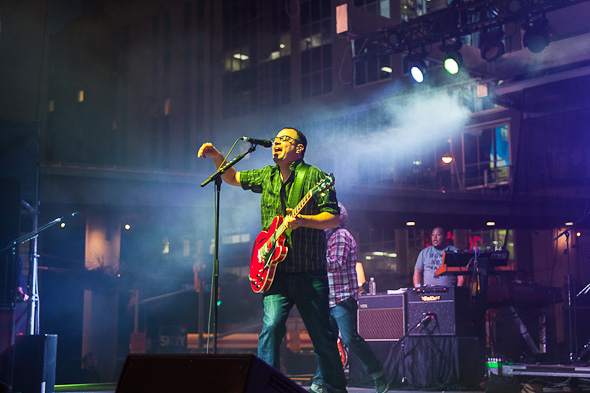 Though as great as it was to hear 'Alert Status Red,' I found that Good was showcased best on his new material. The clear standout of the set was the sparse and beautiful 'Non Populous,' from his 2011 record Lights of Endangered Species.

Before Good came out, Plants And Animals got onstage looking every part the 'post-classic-rock' stars they are. With two members in long wigs--at least, I hope those were wigs--and guitarist Nic Basque in a suit jacket but missing the shirt underneath, it was momentarily unclear if the audience was being treated to an early performance by Saturday's headliners The Flaming Lips. 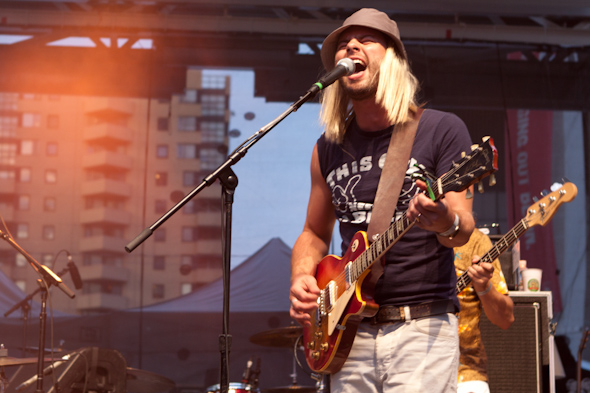 However, as nobody followed them onstage in animal costumes and the beach balls tossed around by the audience were not oversized--or contain Wayne Coyne--the speculation was short.

When the band started busting out slacker jams heavy with long riffs and 'la la las,' it became clear that, no matter the wardrobe, this was the same band that visited Toronto back in April, albeit clad in button-downs and jeans.

How were they? Let's put it this way: during 'Crisis,' the first single from their new record, The End Of That, I saw an elderly lady air-guitaring in the beer tent. She wasn't fooling around, either; her head was banging, her hands were riffing, and at the end of the tune she threw up the devil-horns. You can take that how you wish. 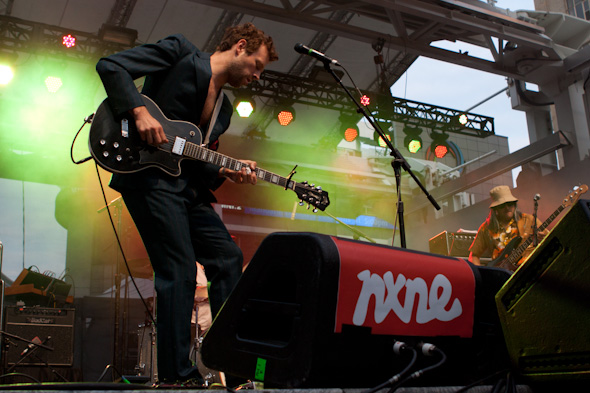 Opening up the show were Eight And A Half, the much-hyped Canadian indie supergroup. Actually, that might be a bit heavy-handed--but what else do you call a band that combines The Stills' David Hamelin and Liam O'Neil with former Broken Social Scene drummer Justin Peroff? 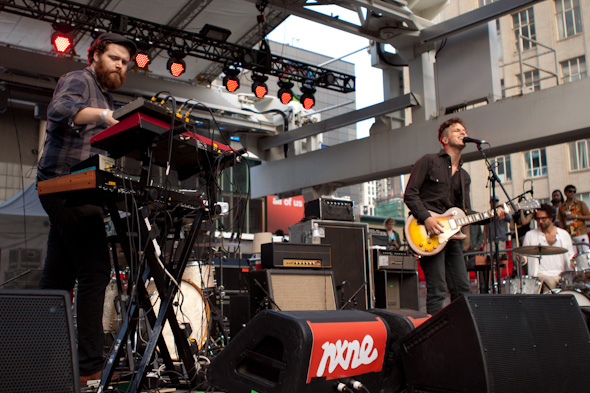 We covered their first concert at the Drake back in February. I wasn't sure how they'd do with the crowd, but between then and now, the band has definitely fixed any issues that may have been detracting from their set.

Somehow maintaining a pressing intimacy amidst the neon glow and animated billboards of Yonge-Dundas, they kept the crowd mesmerized throughout their too-short set. Songs that relied heavily on synths and samples in the studio, like 'Go Ego' or 'Scissors,' benefited from the live mix, which pushed the guitar much more than on the album.

Eight And A Half are taking their newfound outdoor-festival chops on tour later this summer; they're next playing at the Wolfe Island Music Festival on August 11th. 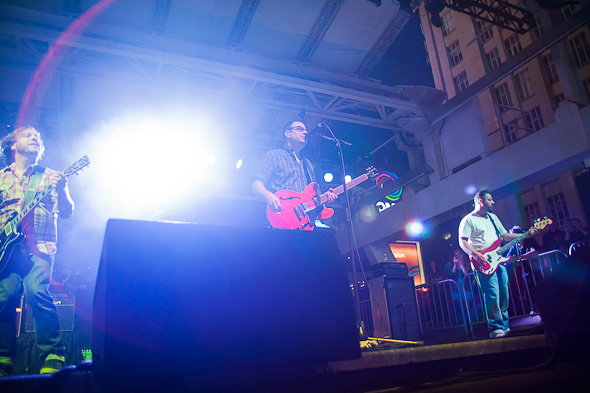 By the time you read this, Plants And Animals will be in Montreal, about to go on at the Festival Folk sur le Canal; they're back in the GTA on July 6th, though, to play the Mariposa Folk Festival in Orillia. Matt Good is playing a solo acoustic show in July at Peacefest in Peace River, Alberta. He's playing again with a full band at the Kee to Bala on August 11th.

North By Northeast is still running; head out and see some shows!

Photos of Eight And A Half / Plants & Animals by Bruce Emberley, photos of Matthew Good by Brian Morton