Highlights and lowlights from NXNE 2012

By the time late Sunday night rolled around and the 2012 edition of NXNE was in the books, the realization set in (as it always does) that despite all the late nights and concert hopping, one only gets a chance to catch a snippet of what's on offer at the festival. There's just too many bands on the schedule to achieve any type of comprehensiveness. That said, we collectively made it out to more shows than we thought possible after waking up hungover from the first night of the festival.

Here are some of our highlights and lowlights from NXNE 2012. 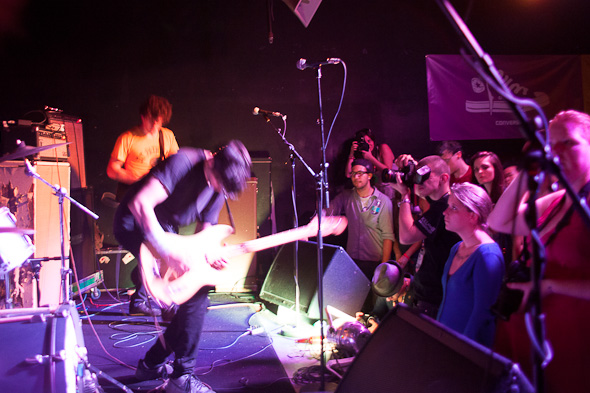 It couldn't help but be seen as an occasion when a huge crowd welcomed local post-hardcore heroes METZ back to the stage. While they hadn't exactly been absent for any notable length of time, hype for the set was bolstered by the day's earlier news that the band had inked a deal with Seattle's venerable Sub Pop - no small feat for a Toronto band with just four self-released singles to their name. Not that breaking this news to the masses would result in the band resting on their laurels - they still played as if they had everything to prove, and the crowd was more than happy to reciprocate with heated enthusiasm.

Singer Alex Edkins maniacal, David Yow-tinged vocals were somehow still spot-on as he slashed relentlessly at his guitar, and when their set came to a close 25 chaotic minutes after it began, no one was really sure what had hit them. METZ are one of those rare bands that can balance the tightrope of noise and melody with aplomb, and the fact that they've been honing their craft for almost three years now more than shows in their live performance. Now that they've got studio evidence and one of the biggest independent labels behind them, they're poised to take the world by storm. A.K.

Archers of Loaf at the Phoenix, Saturday 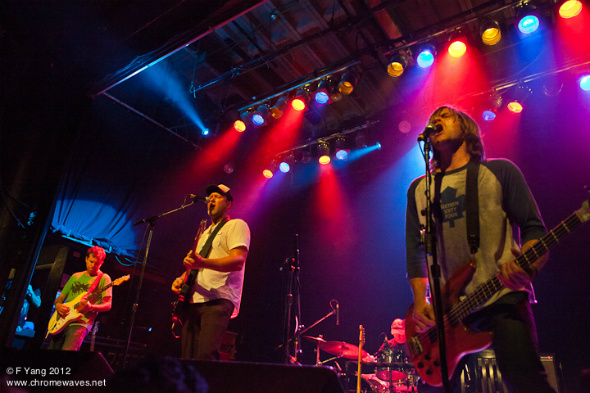 Easily one of my most anticipated sets of this year's fest (although technically their own show) was the return of North Carolina's Archers of Loaf, finally trekking it back to Toronto nearly fifteen years after their last visit. In a wise move of synchronicity, NXNE scheduled them to play the day after the world premiere of "What Did You Expect?," the fantastic documentary/concert film chronicling the reunion.

Originally existing between 1992 and 1998, a stretch that resulted in four post-punk-informed and term-defining indie-rock records (including their stone-cold classic debut, Icky Mettle), an argument can be made that Archers are emblematic of the potential of independent, guitar-based rock music of the '90s. Poor management and road exhaustion broke them up first time around, but the reunion, begun last year, has proven their music's longevity and the band's performance chops.

A throng of dedicated fans made it out to see the band despite the plentiful amount of other programming options all over the city, and were rewarded with a set that dug extensively into the Archers' back catalog, airing out the obvious should've-been hits and deep cuts alike. Emerging onstage to the wash of feedback that opens "Audiowhore" and transitioning without a pause into one of their bigger singles, "Harnessed in Slums," it was clear that this would be anything but a bloodless victory lap. The band attacked the material with the fervor of a group just starting out, particularly bassist Matt Gentling who jumped, flailed, and sang along with singer/guitarist Eric Bachmann back at the exuberant chorus of fans.

Bachmann, who has been on active duty as Crooked Fingers since the Archers breakup, had never sounded better, barking out the old songs with a voice that has only smoothed out and improved in range with age. Spanning well over 20 songs drawn from each of their albums and clocking in at nearly two hours, the set was a vivid reminder of how sorely Archers of Loaf are missed, and how no one quite replaces their melodic muscle. Photo courtesy of Frank Yang. A.K.

Smith Westerns, Vice Island Party, Thursday
There is something special about cruising over to the island on the ferry with the sun in your face and your bike by your side after work. This is immediately bested when you get to a party that is serving copious amounts of free Red Stripe beer (they were encouraging me to double fist), tacos, a good-sized bonfire, the beach a sandy jaunt away and up-and-comers Smith Westerns banging away as the sun drops. Doesn't hurt that they have a surfy, Strokes-influence and that they are just youngsters. If they're this tight already, the next couple of years are going to be good for these dudes (and dudes is the appropriate word here, considering the environ for this kind of a showcase). R.B.

The Lumineers at The Horseshoe, Saturday 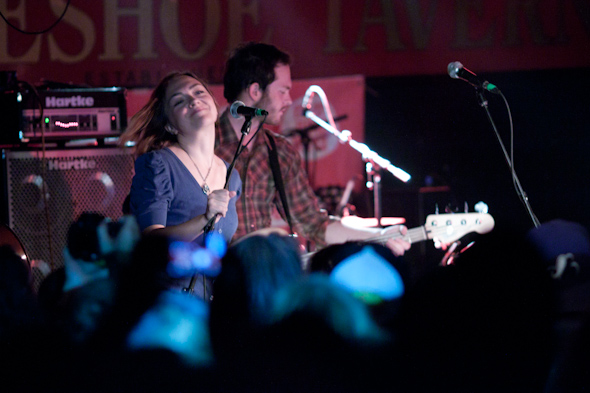 I knew the showcase for these Denver-based lads would be packed. They were just picked up by Dine Alone Records here and that "Ho Hey" song is as catchy as any Mumford & Sons ditty. But as I frantically biked from the Flaming Lips bonanza across the city to the Horseshoe, I wasn't expecting a line up in both directions of about 400 people (this is a great time for the media pass to come into action, it should be noted).

After flashing the laminate, I'd never seen the Shoe so bloody rammed or hot and sticky. But it was worth it as The Lumineers put on a solid showcase showing their solid Americana folk chops. Their debut album just dropped in April, and although a solid piece of work, no other track really comes close to the catchiness of "Ho Hey," but the intimacy they brought to the Horseshoe shouldn't go unaddressed. R.B.

An awesome show that delivered on the hype. Read the full review here.

BAND WITH THE MOST ENDURANCE 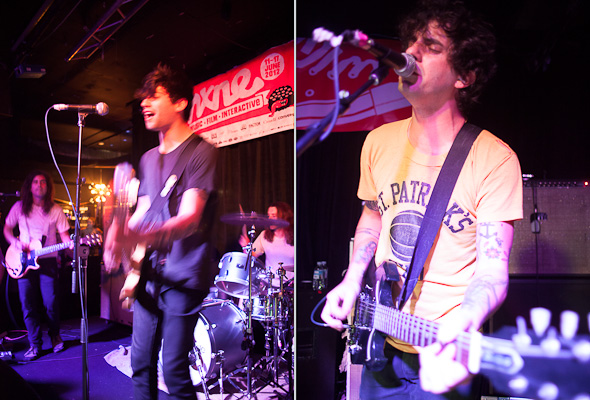 Four shows in two days can seem like a tall order. Walking into a packed Wrongbar in which Brooklyn's the Men were acting as de facto headliners of the night's Converse showcase, it was feasible to think the band might be burned out from lugging their gear all over the city for the past couple days. Another variable was the makeup of the set, as each of the band's three albums depict a band in different stages of musical growth, building from the doomy, noise-ridden hardcore on their debut to the Husker Du-influenced indie rock all over their most recent LP Open Your Heart.

Any worries of exhaustion or lack of cohesion were for naught, though, as the band delivered on the promise of their recorded material with all rock and no accoutrements. A few songs harkened back to the jammy psychedelics of some of their early material, but most of the set had a chugging efficiency to it that got the crowd responding with raised fists and crowd surfing a-plenty, especially on Open Your Heart's anthemic title track. If they can get this kind of reception on their fourth show of the week, they might just have to play five next time they're in town. A.K.

BANDS TO KEEP AN EYE ON

Gold & Youth at the Rivoli, Thursday
There's something about the nostalgic and dark baritone vocals over dark and hook-laden synths that's immediately arresting. Something very much in line with both of Toronto's Trust (also on Arts & Crafts) and Austra. Their showcase caught me and the mesmerized audience off-guard at a fairly packed Rivoli. Zulu Winter, a much-hyped English band that followed, was underwhelming in comparison to Gold & Youth, a band that hasn't even dropped their debut yet. Good things to come if Thursday night was any barometer. R.B.

Young Magic at the Garrison, Friday
Friday night I went to The Garrison to see Widowspeak on the recommendation of a friend and came out with more to say about the "special guest"- Young Magic. Not knowing much about them going in, we debated for a while whether or not to stay, but soon enough 3 songs had lapsed and we were still there. The Brooklyn-based trio is made up of Isaac Emmanuel and Michael Italia (Australian expats- though only one was present at this show) and Melati Malay who hails from Indonesia. They mix dreamy, washed out shoegaze with syncopated African rhythms and hip hop. That description makes me want to kill myself and could also be swapped for "hipster crap," but days later I'm still humming "Night in the Ocean" and thinking of Melati's shiny Pocahontas hair and convincingly witchy vocals. E.S.

Cousins at The Annex Live
This show didn't happen. I had to work late and couldn't catch them at 11pm at The Velvet Underground, so Thursday, after The Men at The Garrison I biked up to Bloor and Brunswick and into a tunnel of darkness. I guess my bike lights are assholes because, as I'm sure people were able to see me, I couldn't see shit. I kept going to The Annex Live anyway. As I was locking up my bike Aaron Mangle happened to be walking by so I shouted "Aaron! Hi, it's Erin" and we talked about our softball teams and power outages. I later ended up at Pizza Pizza (I know) and once I went into the bathroom I knew it was fate: inside was the perfectly staged NXNE photo. A copy of NOW with their NXNE cover, a pack of cigarettes and shitty underwear. I couldn't believe my luck. Not only was Cousins cancelled, but I got to see shitty underwear. So, best night ever! E.S.

Cancelled shows and bar closures
It wasn't exactly an auspicious start to NXNE when Toronto Police Guns and Gangs unit descended on the Rivoli prior to the SmashMouth Mentality showcase on Wednesday and cancelled the night's festivities. It sounds like this drastic measure was taken on account of security/capacity concerns, but it seemed an odd development at the outset of the festival. Ditto for the suspension of Unlovable's liquor licence — a punishment that still seems incommensurate with the overcapacity charge (though I suppose it depends of just how over-capacity the place really was). D.F. 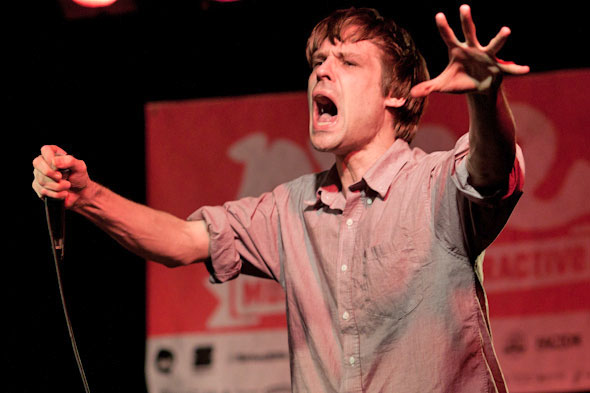 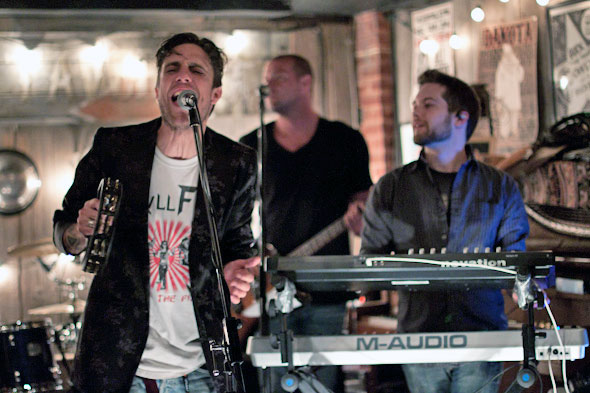 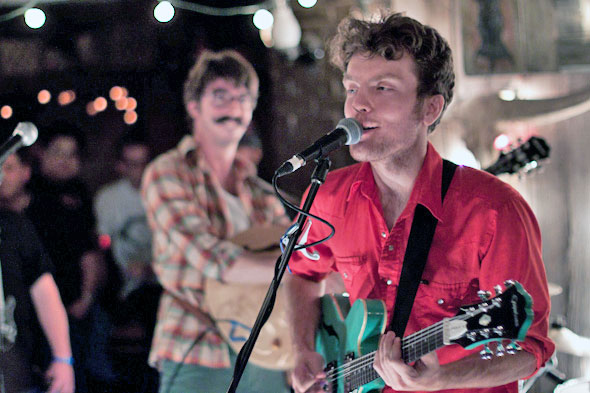 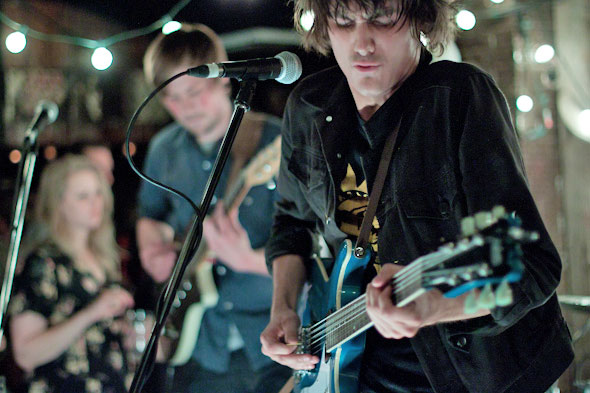 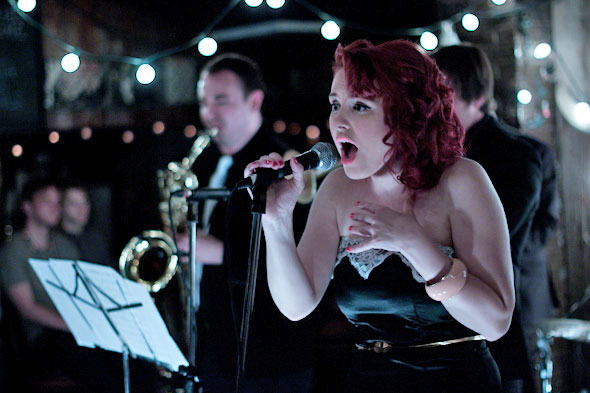 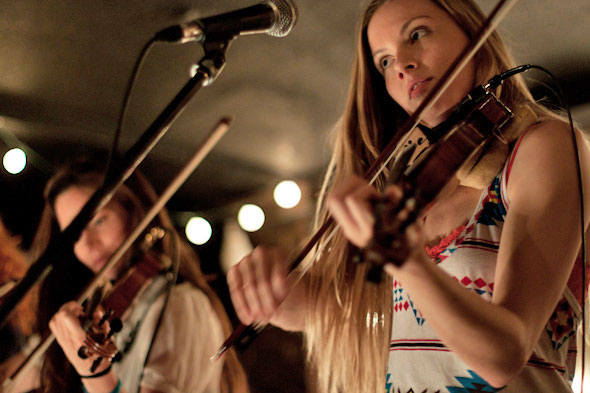 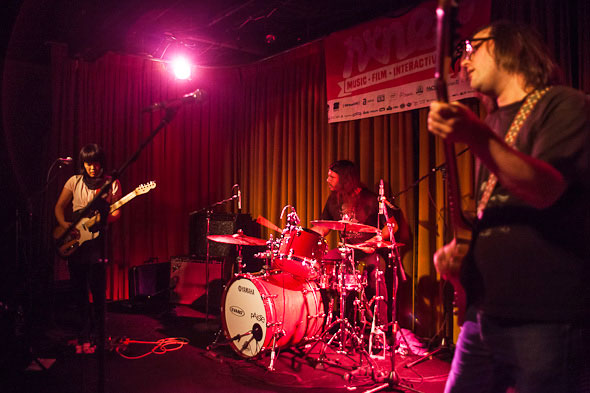 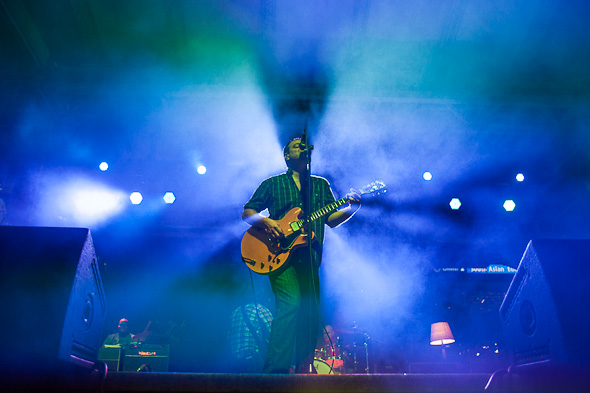 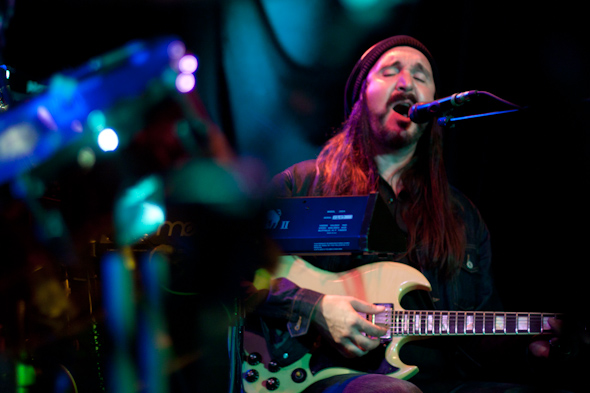