"I'm coming home, so leave the light on for me," Tony Dekker sings on "The Great Exhale," from Great Lake Swimmers' new record, New Wild Everywhere. The song follows, "When I get in, I will see you all there." Lines like that were tailor-made for the crowd that was waiting to welcome the group home to Toronto at the newly-reopened Danforth Music Hall, as they prepared to take a breath before heading back out to finish a North American tour.

I can only imagine having a string quartet to back you up would give you a certain confidence in your material. True to that theory, the band was seemed quite sure of themselves, smiling and easy while the quartet moved on and offstage several times throughout the 21-song set. 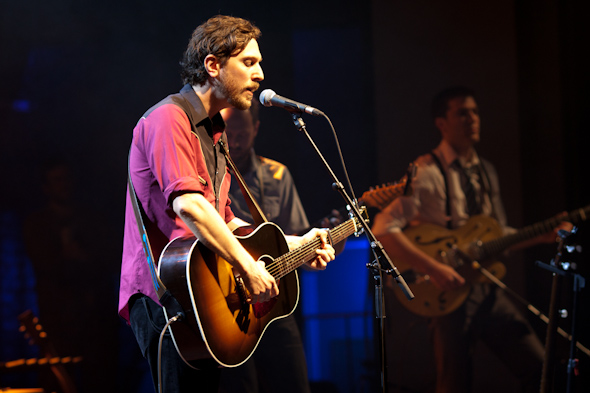 As one would expect, the set was heavy with new songs, but they dug out plenty of tunes from their back catalog as well. During "Moving Pictures, Silent Films"--for which Dekker dismissed the rest of the band and played alongside the quartet by himself-- the incredible acoustics and warm natural reverb played breathtakingly well into Great Lake Swimmers' signature sound. 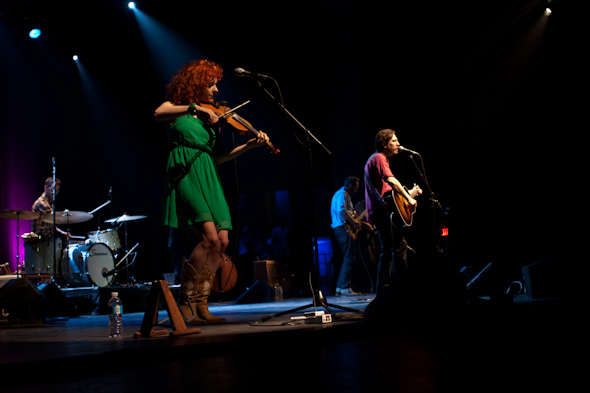 Opening the show was self-described 'doom folk' musician and Canadian expat Cold Specks. Probably one of the most hyped acts in the Canadian music industry at the moment--here's Graham Wright waxing poetic about her career--lead singer Al Spx did not disappoint. 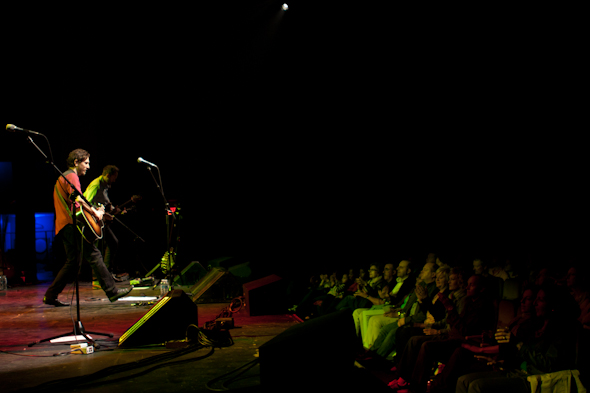 On her debut album, I Predict A Graceful Expulsion, Cold Specks' songs are spare and restrained, given just a light bit of polish by other musicians and production techniques. Live, that was taken to the extreme--it was just Al Spx and a guitar. On the wide stage of the Music Hall, she seemed dwarfed by the venue, but only until she stepped up to the mic and sang. Her voice was grave, her lyrics were heavy, and her performance was impeccable.

Cold Specks' set marked the first time I've ever seen a standing ovation for an opening act. She played songs from her debut, but closed by dropping even the guitar and singing a capella into the microphone. She began "Old Stepstone" with that same haunting poignance that's marked the rest of her material.

Then, astoundingly, she stepped away from the mic and continued to sing, her voice still clear and powerful amidst the wash of reverb from The Music Hall. Cold Specks is a must-see. 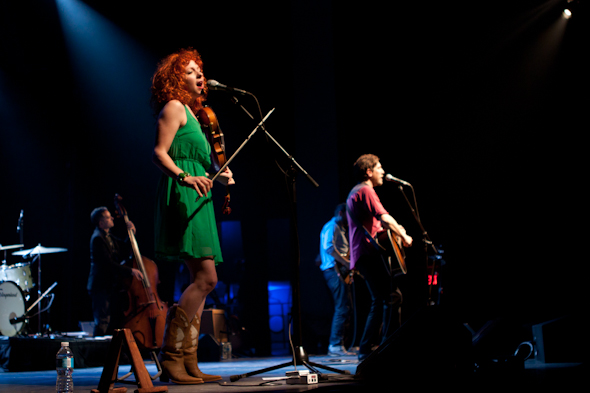 Unfortunately, Cold Specks will not be back until July, when she plays Calgary Folkfest on the 27th-28th and Hillside Music Festival in Guelph on the 29th. She's back in Toronto August 8th to headline a show at The Great Hall. Great Lake Swimmers are heading back to the United States, but will also return to play at Hillside, as well as opening up Blue Rodeo's annual August show at the Molson Amphitheatre this year on August 18th.

Setlist:
Think That You Might Be Wrong
The Great Exhale
Changing Colours
Changes In The Wind
The Knife
Ballad of a Fisherman's Wife
The Chorus In The Underground
Cornflower Blue
Quiet Your Mind
A Song For The Angels
Moving Pictures, Silent Films
On The Water
Your Rocky Spine
Fields Of Progeny
Everything Is Moving So Fast
Palmistry
Pulling On A Line
New Wild Everywhere
Easy Come Easy Go

Encore:
Parkdale Blues
I Am Part Of A Large Family