The last time someone from this website reviewed a Xiu Xiu gig, the show was over-run with hyperactive munchkins from the internet, to the reviewer's great disappointment. Seven years later, I can assure you that if those Xiu Xiu fans were at Lee's Palace on Saturday, they have chilled out considerably, giving everyone a chance to focus on the music.

Xiu Xiu's Jamie Stewart is nothing if not a pioneer of twee-noise and avant-pop. His cover of Rihanna's "Only Girl (in the World)" turned a lot of heads in 2011, just as a decade earlier the band's combination of sprightly pop melodies with bizarre percussion and unrepeatable lyrics made them a unique entrant on the indie scene, and endeared them to so many weirdos.

I wasn't a teenage creeper at that fateful Toronto show, but I do remember, eight years ago, hiding in the back of Xiu Xiu's Manitoba gigs after telling the door person I forgot my (obviously nonexistent) ID at home. I also recall being awestuck by, and terrified of, Xiu Xiu's impassioned live performances and arsenal of unconventional instruments. I doubt that any shows I saw before reaching legal age left such a strong impression on me.

As a mostly chilled out, and ID-bearing, adult, I was excited rather than scared on Saturday night. 2012's Always is a great album - old fans who have strayed should definitely check it out - and Stewart has grown to be a rare symbol of integrity to many long-time fans. Xiu Xiu's present choice of openers may be more conventional than those of the mid '00s, but black-clad Italian trio Father Murphy was impressive and morose, combining their voices in chilling unison and emitting strong Swans vibes while creating a doom-churchmouse sound very much their own. 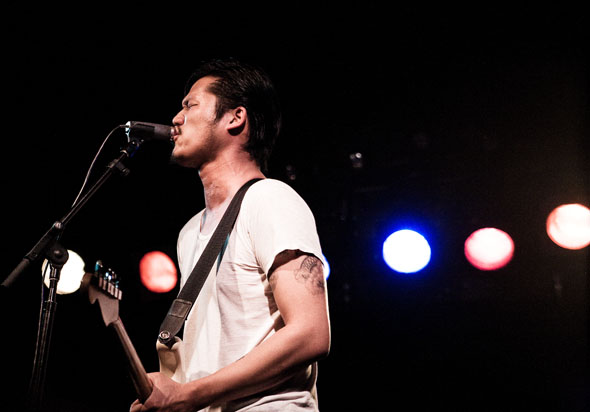 Dirty Beaches, who's been sharing the headlining bill with Xiu Xiu, was on at 11 p.m. The floor was packed, and some girls screamed. Alex Zhang Hungtai was joined by another young fellow with a second guitar, and together they began making some fuzz and feedback which came off as forced, and the set didn't go anywhere from there. 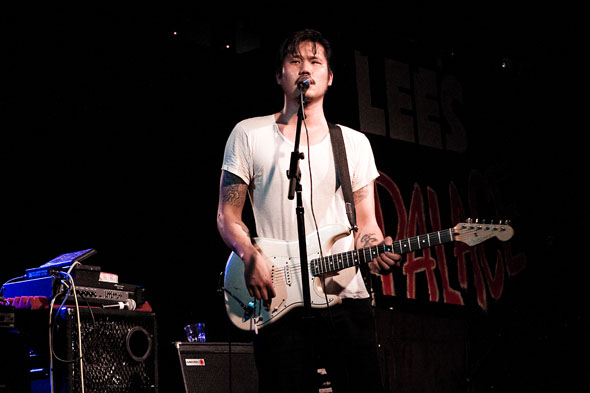 A major issue was the mood - Dirty Beaches is lo-fi rockabilly with an experimental edge owing heavily to Suicide, and while it's a cool sound, there isn't much that distinguishes one song from the next. Hungtai has a convincing persona, and had he been alone and in the dark, he might have achieved the atmosphere needed for his aesthetic brand and repetitive sound, but the unnecessary second guitarist and ample lighting worked against him. 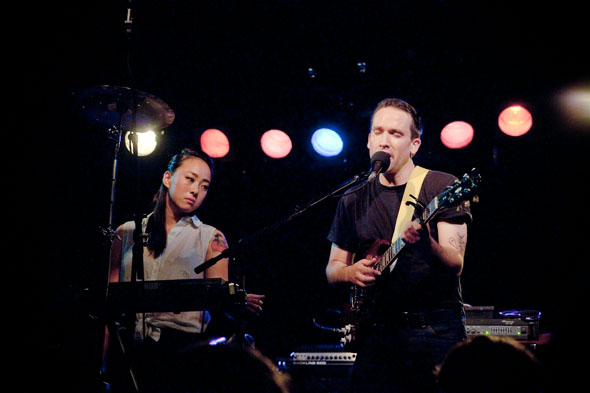 At midnight, Stewart and the mysterious Angela Seo (who has been a Xiu Xiu member since 2009) appeared, faced one another, and began a short, cryptic mime. While fans attempted to make sense of the series of gestures, the band began their 2004 single "Fabulous Muscles," and the strange duo, who remained as somber and serious throughout their time on stage as their namesake requires them to be, captured the room within the first minute. Catchy "Beauty Town" was next, and the new song proved as strong as the band's old material. 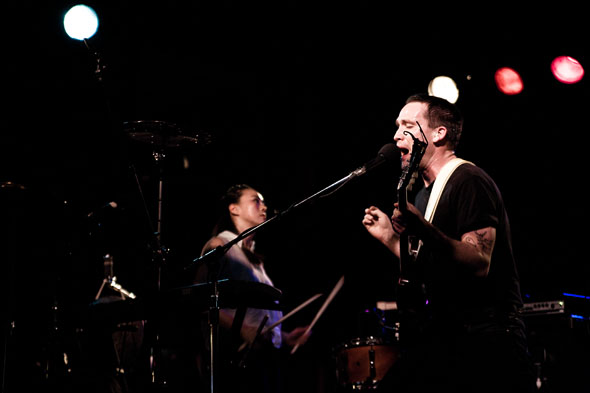 I was then surprised to hear the opening notes of "Suha," a crushing song from their first album, and my favourite Xiu Xiu track. I'll never forget the moment Seo began releasing distant vocal clicks and warbles at the microphone during "Sad Pony Guerilla Girl," another old favorite, while sweat fell like tears down Stewart's face and waves of noise rose and fell.

I could have left happy, but the night brought more magic: Seo's dramatic wailing on her cymbals, Stewart leaping at times with his guitar and exorcising some intense demons during "The Fox & The Rabbit," and the chance to bop and get twee with other (very chill) fans during the band's bouncier moments.

All of this took a back seat to the encore, however. When Xiu Xiu returned, Stewart was without his guitar. Mic in hand and backed by a drum machine and Seo on gadgets, Stewart launched into a thrilling cover of "Frankie Teardrop" which was a bad decision only in that it made the long-forgotten Dirty Beaches set pale even further. Stewart was all sexuality: posing, dancing, jumping and kneeling on the high stage, strangling himself and belting out the classic lyrics with total abandon until eventually breaking down while repeating "we are all Frankie." It was a performance that was real, confrontational, and pure in its emotion: everything my weirdo adult self had left home hoping to find.