A sold out crowd filled the 600 capacity gallery at 99 Sudbury on Friday for the debut of Visions. Toronto music fans were out in droves to see L.A. producer Shlohmo, but when I first arrived, it seemed like half of Toronto was in line. As I waited, party goers attempting to leave were told there would be no re-entry to the make-shift club. Some debated deserting for other parties, while others waited patiently, or yelled into iPhones: "over here, I can see you!"

I had texts coming at me all day about Visions, ranging from "when are you going?" to "what is it?" The night marked the debut of a Toronto party series that combines internationally acclaimed musicians with video and art installations, performance art, and food. Friday also heralded the three year anniversary of organizers Mansion, a self described "collective of music-lovers that devote their efforts towards quality events in non-traditional settings" (they've hosted parties in Dim Sum restaurants and at a church, to name a few).

Inside, 99 Sudbury was a panic attack waiting to happen. Four thirteen-foot-high wall sections showed geometric projections by A-Rock, aka Adam Hummell of Montreal's Moment Factory (one of the forces behind Madonna's halftime visuals), while lights bounced off every surface. 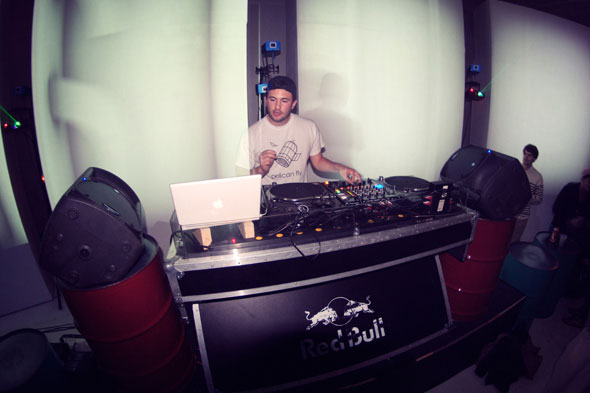 Toronto's Deebs was playing, and I was disappointed to learn I'd missed ex-Weeknd member, Toronto's Zodiac. Deebs sounded far away, but when I moved closer the producer's future bass and R&B sounds filled out.

In the side-room, which housed the video and art installations as well as a second pop-up bar, large geometric triangles were lit up in one corner and video projections beamed onto stretched rectangles of canvas in another. 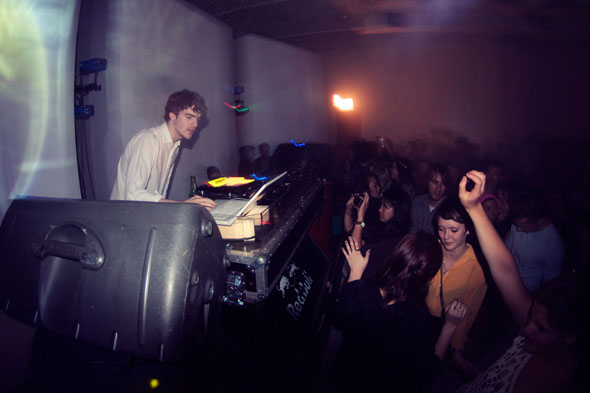 In contrast to the main room, which was too dark for people watching, this chill-out space felt too bright, even florescent, and I drifted through and back into the main room in time to see Ryan Hemsworth and Deebs switch off.

The light show became more dynamic and the Halifax producer bounced at his laptop, surrounded by photographers, blasting through quick, genre-hopping mash-ups and playing snippets of recognizable underground sounds much as King Street's club DJs must have been doing at that moment with top 40 jams. Many party-goers, myself included, weren't sure how to dance to Hemsworth's experimental switch-ups from aggressive grime to r&b; I wandered outside, where swaying to Hemsworth's basslines seemed to work out. 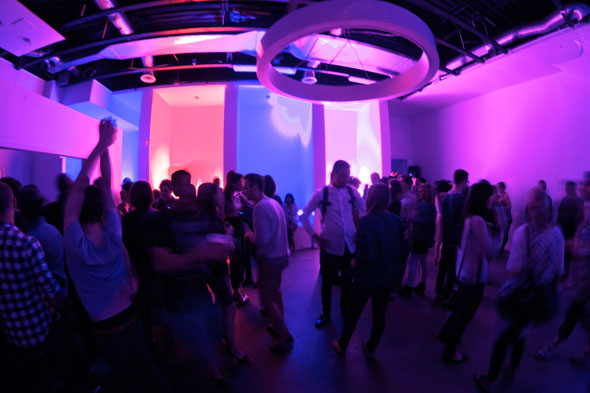 Finding Fidel Gastro's stand, I ordered a gourmet sandwich which first struck me as tiny, even for $5. In a matter of seconds I learned that this was no ordinary snack. There's a reason I don't write food reviews, but there was some amazing vinaigrette in that veggie work of art; I wish I had another one right now.

Shlohmo's Henry Laufer took over just after 1 a.m, wearing a hoodie although the temperature seemed to rise a degree every few minutes. Glow sticks appeared amid cheering and jostling in the crowd. I spotted a girl wearing only her underwear, and after some confusion I realized I must have missed Morgan Eadie's performance art. 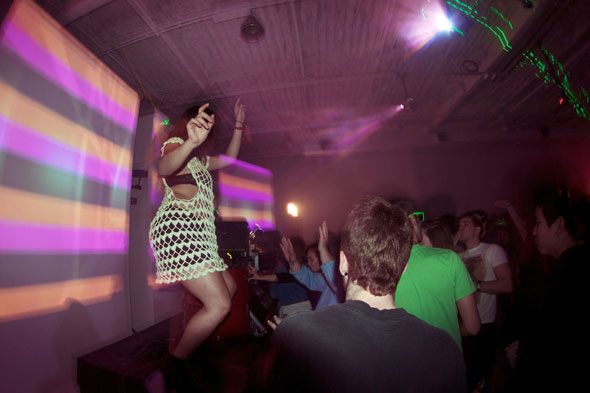 Laufer, lost in the fog, began with slow beats and R&B samples. As avoiding bad dancers and smelly fans (or both) became top priority, Laufer seemed to be pausing between songs and I wondered why, until I noticed him shaking his head and throwing his hands in the air: technical difficulties. For the first half of his set the problem, which was likely due to his laptop input or a software failure, persisted, but Toronto was forgiving and Laufer was quick to please with his "Crew Love" remix, though the rumoured Weeknd appearance turned out to be just that.

After some dirty noise and deep witchy cuts, Shlohmo broke into a slow, screwed "Genie in a Bottle" remix accented by stop-time beats, exemplifying Vision's arty mandate and hailing back to a time when triangles were experiencing a weird crest of popularity. Diverse dance styles and spirit fingers were scattered across the floor, though many attendees were hanging out and talking. 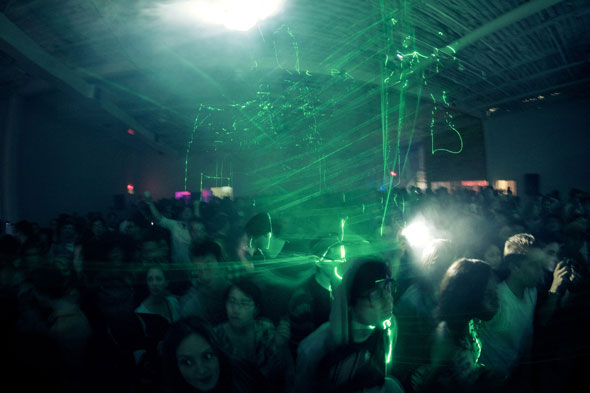 No one was feeling the music more than Laufer, and mid-set, maybe sensing some fans just wanted to dance or perhaps frustrated by sound issues, Shlohmo abandoned the chilled out vibes he's known for and began to blast dubstep while thrashing on stage. The room came alive--literally, the floors shook--eager dancers freaked out, and the projections switched to computer-animated dancers and faces. 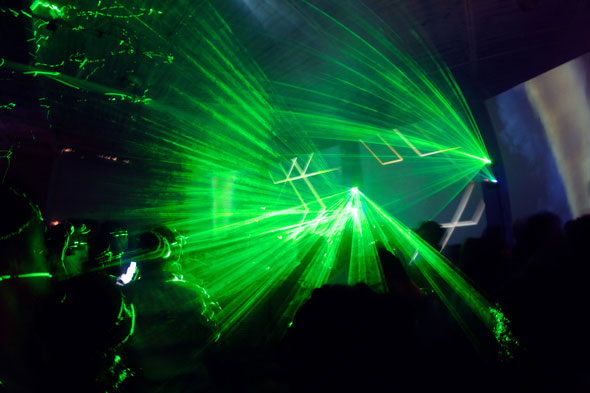 Art and party are hard to bridge: an event will usually swing one way or another. Visions was likely left field for attendees used to the bump and grind of traditional club nights, while it often rode the edge of what I could tolerate at the other extreme. That's not a diss, though, and I look forward to Visions' future: its creators have a fantastic board on Pinterest showcasing their installation inspirations, and their taste in producers (and sandwiches) remains first class.