Get to know a DJ: Cozmic Cat (Paula Burrows)

Even DJ Cozmic Cat's name exudes a kind of playful charm, and as I sit down to chat with Paula Burrows, I can't help but smile and laugh as she shares memorable stories from her already long deejaying career. Beyond the endearing persona, however, is one of Toronto's hardest working deejays. Not only does Burrows hold four concurrent residencies — at Slack's Bar, 3030, Hotel Ocho, and Andy Poolhall — but she constantly works and collaborates with other talented Torontonians. Be sure to check out the mix that Cozmic Cat made for blogTO at the bottom of the post and, if you like what you hear, visit her Soundcloud page.

How did you get involved in deejaying?

Well, I've always loved music. I was that kid who used to tape stuff off the radio and knew the words to every song. One day, I heard a DJ mixtape for the first time — this was in the late eighties — and I asked myself, "how did they do that?" Right away, I decided that I needed to learn to deejay, so I went to Radioshack, bought a mixer and found a cheap set of turntables, and quickly became immersed in deejaying.

Before I came to Toronto, I lived and worked in Philly for ten years, and it was in Philly that I got my break as a DJ, and also eventually got burnt out from spinning so much. At the time, I mostly played old school hip-hop and party rocking parties. I also did a lot of A-list parties in both Philly and New York. In the process, I lost sight of the things that originally inspired me about music. Besides, it felt like it was time for me to come home. When I finally came back to Canada, I didn't spin for almost a year and, even when I did start again, it was almost exclusively in the queer scene. Thankfully, I also started to play much more eclectic parties, too. 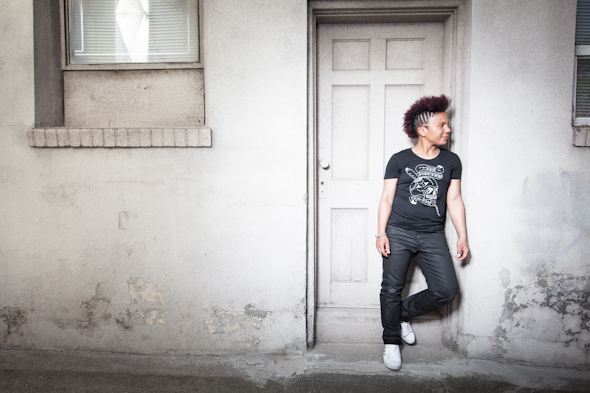 What was it like to come back to Canada after such a long exile?

Toronto is such a wicked music city with so much talent. In Toronto, the nightlife allows me to express myself in whole new ways. There are a ton of great gigs and promoters out there who are all trying different things. At the end of the day, however, it's all about the relationships you build with different people. I feel that I'm at the point where I have exciting opportunities in different scenes because of all the amazing people I've met and worked with. I appreciate all of Toronto's scenes for what they have to offer, as I love to spin a wide variety of sounds. In Philadelphia, I felt like boxed myself in musically in order to maintain the status quo. Now I feel free!

Ultimately, I've always been involved in music — whether its been through working with record labels, producing, or though my deejaying — but I needed to come at my passion from a different perspective. Returning to Canada got my mind right about what it is that inspires me about music.

Want to tell us a bit about the label you run?

My label is called Jupiter Productions. At this point in my life, the theme of giving back is a big one. I've been fortunate to have a fun career in the music industry, and to now be able to work as a full-time DJ and producer is amazing.

However, there's a whole collection of artists who have great music to share, but no idea how to put it out there. My goal is to help them share their sound. I know that feeling of just getting your music out there, and it's a great one.

As for specifics, I've got Egyptian-Canadian female MC Jazz on my label, releasing her debut album July 21st. I'm also helping Toronto-based band Lal push their new project once they return from a tour in Berlin. 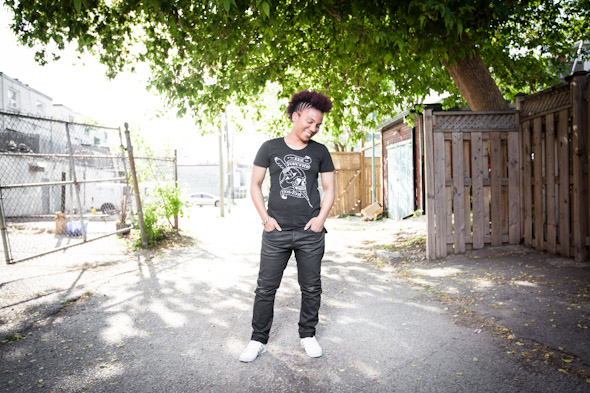 You've deejayed for a while now and I imagine you have more than one funny story to share?

I was deejaying at club in Philadelphia called Soma Lounge. That particular night it was rammed, and at the club, which is closed now, there was only one toilet. Whenever we needed to go to the washroom, the staff and DJs went to the back stairwell and peed in a pint glass. I went to pee and completely missed. I managed to pee on a set of wires, short-circuiting the whole electrical system. The club lost power and the emergency lights went on. I literally pissed on the party. It feels like very me moment.

Do you remember the song that you were playing at the time?

It was probably the Sugar Hill Gang's "Rapper's Delight," or something along those lines. DJs have bathroom songs and "Rapper's Delight" is one of mine. It helps that the song is twelve minutes long (laughs). 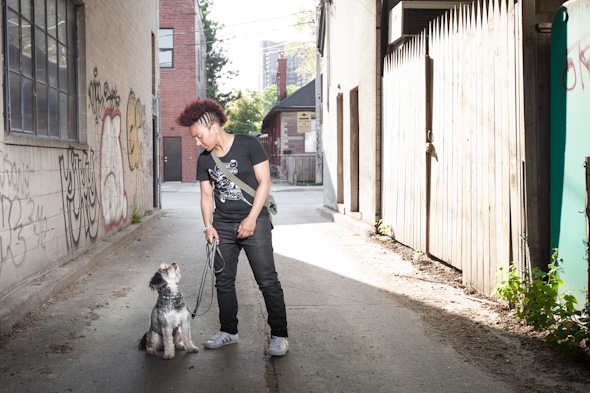 Besides deejaying, what are some of the other things in your life that motivate and excite you? A reliable source told me that you could kick my ass, for example...

I'm going for my black belt in June, and I just got back from a tournament in Kigali, Rwanda. I managed to win the gold in women's kata — the style of karate I practice is called GÅjÅ«-ryÅ«, which is an old Okinawan style. I'm also currently studying Jazz guitar and loving it. Joe Pass, Lenny Breau, and Mimi Fox really inspire me!

Besides that, I'm involved as a youth mentor at SOY — Supporting our Youth. I spend about a few hours every week or so helping youth that are queer or questioning their sexuality and that need some support and direction in their lives.

Oh, and I love my dog! She motivates me to get out there and live in the moment. Dogs are great for that.

As for my production work, I'm performing on the South Stage at Pride fest with MC Jazz. I'm also currently working on producing her debut album, as well as making tracks for Saye Sky. Finally, I'm working on a remix for Aboriginal blues and folk singer, Grey Gritt.

East or west side? West.