Friday night on Dundas West, Aids Wolf devastated fans more than ever before, adding a death note to the night's brutal sonic chaos. It says something about the Toronto music scene when a famed Montreal band plays their final show not at Casa del Popolo, but at The Garrison.

I'm sad to say I've seen the mid-sized venue more packed, but turn out was high; Aids Wolf fans from Toronto and beyond had come to show their respects. Yet even as Brooklyn's Child Abuse blasted noise rock over mulleted heads in the front row just before midnight, the room had a subdued vibe. The band's decision to break up brought with it some weighty issues, which were on the minds of many people in the room. 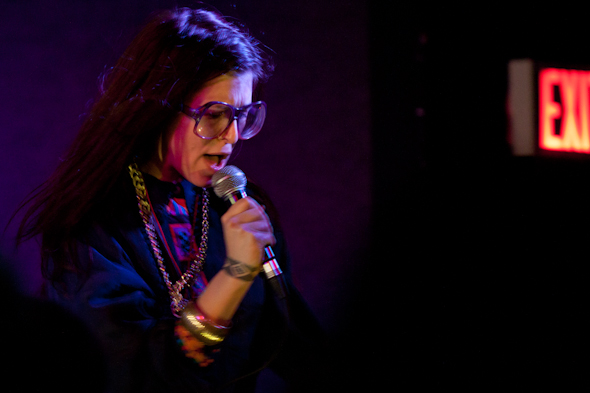 For almost a decade, DIY art-rock, noise-punks Aids Wolf have been inventing their own sound — "unknown wave" — touring, releasing albums, eps and 7"s, and touching countless lives along the way. Aids Wolf posters adorn the walls of noise houses and venues across the world, and when I think of Montreal, I think of the artwork of AW members Yannick Desranleau and Chloe Lum, Seripop. Lum wrote a piece, "On the End of an Era," about the band's break up which virtually broke my heart, touching on everything from the band's accidental success, to the trials they and their peers faced as experimenters making confrontational music for niche audiences and no money. 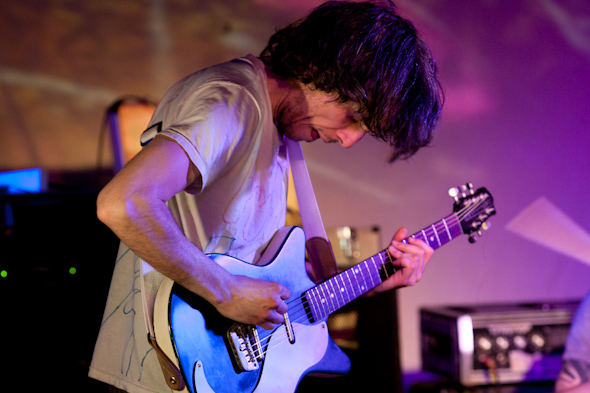 If Lum, Desranleau and Alexander Moskos (also of Drainolith and Thames) wanted to go out with a bang, they succeeded. Aids Wolf gave the performance of a lifetime, especially Lum, who twisted and posed like a psychic priestess, touching hands with fans, smiling one moment and choking herself with her microphone cable the next, then removing her glasses to whip her hair in a frenzy while the industrial roar of the band behind her laid the room to waste. Lum moved into the pit in front of the stage while fans danced, shoved and pulled faces, taking to heart every minute of the noise diva's final stand. 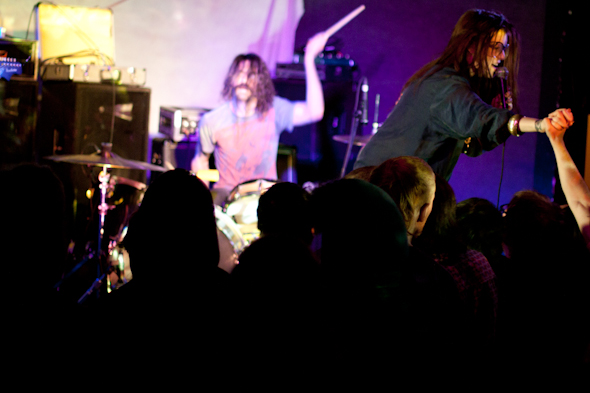 Lum's distorted-beyond-recognition vocals and Desranleau and Moskos's wall of noise and shrill dissonant melodies showed no mercy, and lacking ear plugs I eventually moved back, disoriented to the core by the noise yet still so enthralled that I only made it a couple of meters before turning to watch the stage. When the band finished we clapped as hard as our tired bodies could for an encore, and I was relieved when the trio reappeared.

Aids Wolf played one more song, their energy as high and the sound as loud as ever, and then they were gone. The pit dissolved as fast as it had appeared, and the funereal vibe returned to the bar. I could have watched the band tear down the Garrison all night — I guess that puts me in a similar place that AW found themselves in: I am a niche audience; the sound I love is love-starved. 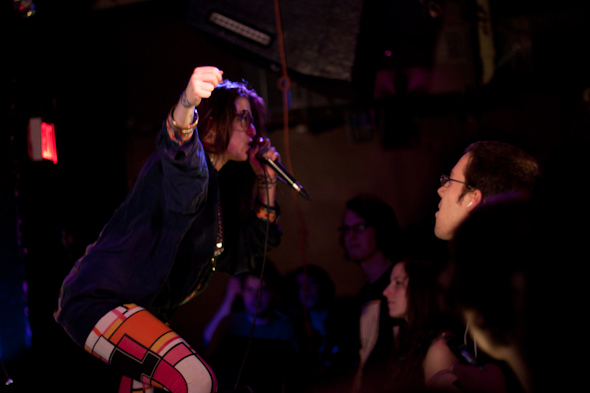 For all the criticism Lum received for her blog post, I hope she knows how important her words were. I think Dan Jones of Berlin magazine Electronic Beats summed the lesson of Aids Wolf's frustrated demise up better than I could in his farewell post: "...if you truly love underground music, support it with your feet, your time and your money. Volunteer at your local DIY space. Don't half-ass show promotion, whether you're playing it, running it or attending it. Treat the bands you book and play with like they matter. Art over money, always. RIP, AIDS Wolf."