Yo La Tengo bring the sounds of science to Toronto

On Saturday night, a rush line formed at the Toronto Underground Cinema for those not lucky to be among the seven hundred or so ticket holders for the night's sold out screening of The Sounds of Science, a night of classic 35mm science films.

Though unlikely under normal circumstances, this was the closing night of the Images Festival, Toronto's experimental film festival celebrating its 25th year, and none other than Yo La Tengo was to be in attendance providing the live score to Jean Painlevé's quirky undersea films.

As the rush line waited on seats opening up to, I snagged a spot in the front row before a huge array of Yo La Tengo's keyboards, guitars, drums and pedals. The night began with Larissa Fan's black and white short starring tiny jellyfish and accompanied by a stirring soundtrack of dis-harmonic, plucked strings - warming the audience both to the undersea visuals and the audio flavours soon to come.

Mantler, aka Chris Cummings, was next with his electric piano, bathed in orange light before a dark, packed cinema, wearing his signature white tuxedo (and white shoes, and white socks). Literally alone in the spotlight, Cummings charmed his audience, showing his chops as a cinematic story teller with a moving song about the theatre. The Toronto artist confessed that he will soon be changing his stage name due to legal action by Michael Manter (who?), and is currently taking suggestions for a new name.

After an intermission, the theatre darkened over the three figures of Yo La Tengo. When the first grainy opening titles appeared, the band burst into bumping, screeching guitar feedback - hitting the entire cinema with the promise of good things to come. The first film centered on crabs, and just as the program had promised, Painlevé's captions, written as subtitles and on title cards, were often sweet, and full of humor.

The band had ample room in front of the stage to move between instruments and they made good use of it, while above their heads Painlevé's camera got close to the action. Then there were those cute and surprisingly informative subtitles; it was challenging to know where to look and when. Up front, we watched the band watch the film, as they waited to add cymbal crashes for delicate moments of undersea drama or weird guitar effects for creepy close-ups. 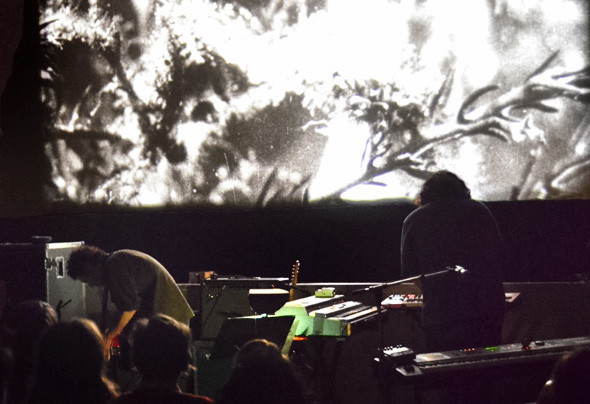 With undersea life enlarged to such magnificent proportions, there were some moments when I forgot about the band playing a couple of meters away - Painlevé's film about sea urchins was gorgeous in colour; the world of the deep looked a lot like scenes from Nausicaä of the Vallery of the Wind.

We learned that these urchins have, as well as their spines, stems that end with suction cups which allow them to roll on the ocean floor. Dreamy soundscapes reminiscent of YLT's And Then Nothing Turned Itself Inside Out, added to wind sounds and strange echoes, accompanied the rich visuals while Painlevé's captions of creatures with lacy, serpent-like heads stirred emotions.

Later, Yo La Tengo mixed it up with psychedelic noise jams while tiny animals (we're talking millimeters) budded in kaleidoscope patterns on screen. The film exploring surreal sea horses was another highlight - according to our guide, seahorses are bored, anxious dignified, and pompous looking, and dance ballet when reproducing. I was close enough to hear Georgia Hubley's fingers tap at her keyboard.

Images have been trying for eight years now to bring these films to Toronto with Yo La Tengo's psyched out sounds, and it's clear why they're so happy it finally came together. Painlevé's artistry made me think about the basics of life, and Yo La Tengo's skilled soundtrack highlighted the emotion of his work both as a scientific storyteller and a filmmaker. It was an amazing experience.