Shabazz Palaces stopped by Lee's on Tuesday night for their debut Toronto performance. Originally beginning to generate interest by virtue of being the first hip-hop group signed to venerable Seattle label Sub Pop (to which they also share a hometown), the intrigue of the band has only increased since they dropped their debut LP, Black Up, last June. Little was known about Shabazz at the time, other than that group was helmed by Ishmael 'Butterfly' Butler, now going under the moniker Palaceer Lazaro, formerly of celebrated 90s jazz-rap greats Digable Planets.

Luckily, the band's personnel and the label to which they're signed are the least relevant talking points upon actually hearing Black Up, which successfully redefines genre expectations and notions of conventional songform. Expectations were high for their first full North American tour, and a three-quarters full Lee's crowd was on hand to welcome them to the city for the first time. 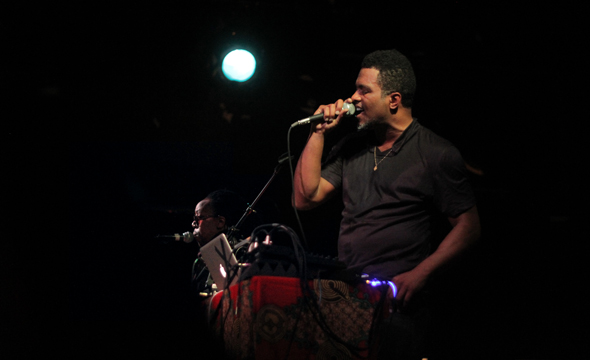 How the band was going to translate the dense sonic nuance of Black Up to a live setting was a concern of mine heading into the show, but luckily the apprehension was for naught. Live — and likely on record too, but the album's credits are oblique to say the least — Butler is joined by multi-instrumentalist Tendai 'Baba' Maraire, who fills out the sound with a pared-down bongo and high-hat drum setup, backing vocals, and what appeared to be a mbira (likely, considering Maraire's father Dumisani popularized the instrument in the US). Meanwhile, Butler played the reluctant yet charismatic frontman, rapping and manipulating his vocals while mostly staying behind his rig of samplers and a Kaoss Pad under a bank of dim lights. 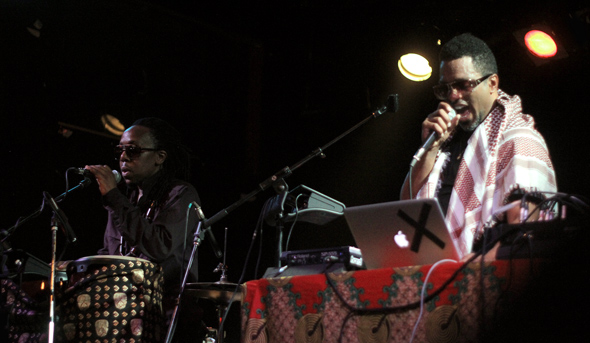 With a record as complex as Black Up, it would be an easy cop-out to simply walk onstage and hit play on a Macbook. Butler and Maraire, despite the prominence of samples in the set, clearly value the physical component to their stage show. During their continuous 90 minute set, Maraire was the epitome of calm and collected as he gravitated from instrument to instrument, while Butler's vocals were commanding and prominent in the mix as he danced and, interestingly, even employed some choreography with Maraire.

While this is not something one would expect to fare well in most live shows, used in line with the combination of warped beats and Butler's stream-of-consciousness flow it was a surprisingly effective move. Addresses to the crowd were rare, but Butler frequently remarked, "wow" during transitions between songs, and occasionally gave brief shout-outs to Toronto. The emphasis the group has placed on the music itself rather than those responsible for it was reflected in their unique approach to a conventional hip-hop live show, which successfully incorporated a performative aspect without being reductive of the actual music on display.

This is not to say it was a perfect show. Lee's, with a sound system normally suited to indie rock and a conventional instrument setup, had some trouble dealing with distortion from the heavy bass in the first part of the set — luckily resolved by the time they concluded with a number of Black Up highlights in a row. At times, the more conventional tracks from their first two self-released EPs tended to blend into one another, although "Gunbeat Falls," with its start-stop beat, was a major highlight of the show. 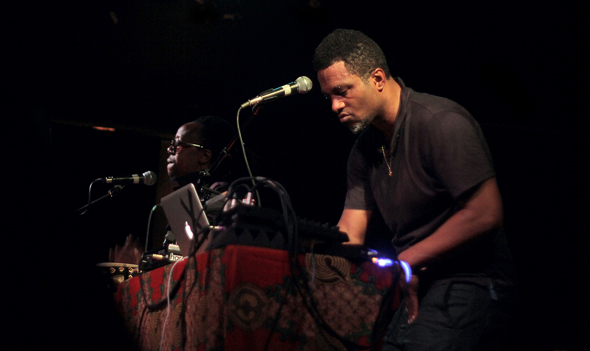 The crowd, divided between those outright dancing and those letting the immense wall of sound wash over them, gave the warmest reception to "An Echo from the Hosts that Profess Infinitum," which featured an excellent extended middle section with lyrics seemingly alluding to the injustice of the Trayvon Martin case.

While certain moments in the set didn't hold up to its (admittedly very frequent) high points, the effect was not so much lagging as it was simply exhausting - but all told, ultimately very enjoyable. The socio-political and anti-consumerist sentiments dwelling just under the surface of their music were explicated upon in concert, but remained difficult to define tangibly. Shabazz Palaces seem to exist in a universe all their own, and when they touch down in our city, well — it's worth checking out. That may sound abstract, but in their own words, it's a feeling.