Death Cab for Cutie charm the crowd despite uneven set

Death Cab for Cutie, Washington's favourite sons of modern rock radio, dropped by Massey Hall Saturday night for their second local performance in support of last year's Codes and Keys. Opting to forgo the typical guitar-bass-keys-drums combo in favour of all that plus an eight-member orchestra, the band was all set to flesh out their sound with classical embellishments that so often result in a flop when paired with a relatively conventional rock band (see: Metallica). However, San Francisco's Magik*Magik Orchestra (who first arranged for the band on a few Codes and Keys tracks) were more than seasoned vets, expanding the sonic territory of Death Cab's tracks to allow for textural improvements without coming off as self-indulgent or needlessly epic. 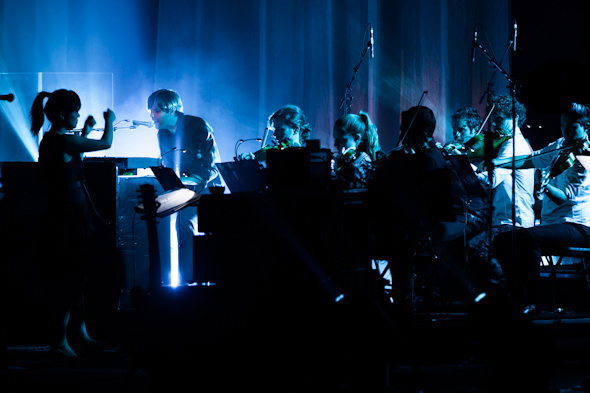 That said, the effectiveness of the usage of strings was unable to compensate for Death Cab's lack of stage presence and, well, less than consistent catalog. Whereas high points such as the infectious single "Cath..." or the angular, early career highlight "Bend to Squares," more than translated well to the orchestral treatment, other parts of the set, particularly tracks from their most recent studio albums, fell flat as the sound mix left the strings nearly inaudible and emphasis was left on the melodic force of the band, which didn't compensate for expectation reached through the set's few transcendent moments. 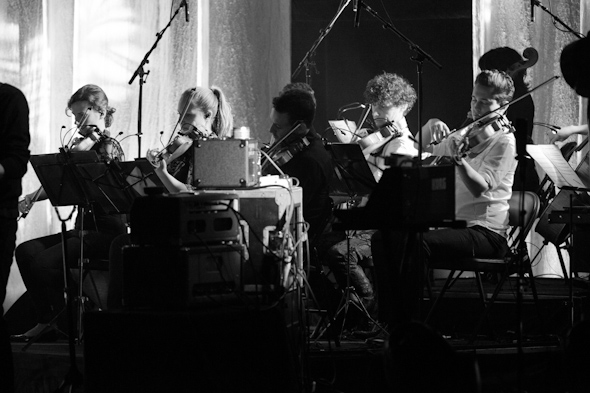 The vast majority of the audience was infatuated with Ben Gibbard & co., and the frontman and guitarist Chris Walla reciprocated the affection. The rhythm section of bassist Nick Harmer and drummer Jason McGerr provided a steady backbeat while Gibbard and Walla took turns swapping guitars and a shared rig of keyboards. Both bantered with the crowd and each other, much to the audible excitement of the hall's occupants.

Acknowledging the spotty sound that was inherent with such a huge mix of instruments, the band remarked after one song that Massey Hall did not seem to be particularly receptive to a "B" chord, which unfortunately made up the basis of the song in question. While this sound issue didn't completely undermine the set, the crowd interaction did help to temper the disappointment that accompanied some of the weaker songs. 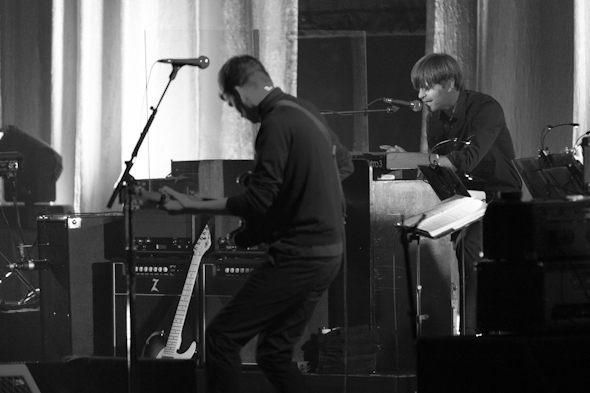 Still, the indistinctiveness of many of Death Cab's songs failed to allow the set to ever really take off. Many others seemed to be thrilled with the sheer prospect of seeing their musical heroes in person, but the concert's highlights were spread out too few and far between. The lone selection from the contentiously received Narrow Stairs, "Grapevine Fires," was lost in a muddled mix and a general sense of placidity. 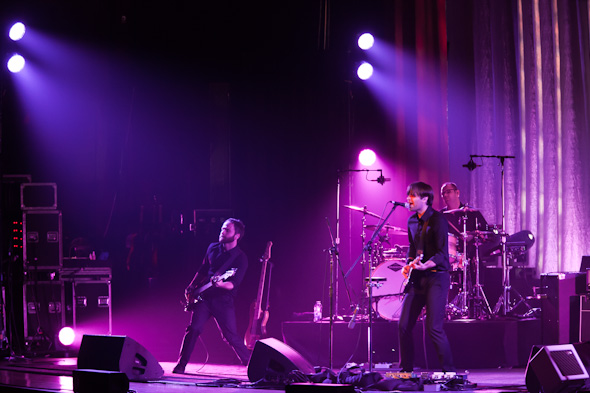 Following a three-song full-band acoustic set, the other band members cleared the stage for Gibbard to showcase the band's biggest hit, "I Will Follow You Into the Dark," accompanied solely by the Magik*Magik Orchestra. The song received the loudest crowd reception of the night, and the devotional attention to every one of Gibbard's journal-esque lyrics inspired a kind of intimacy that had been absent throughout the show proper.

The band came out to finish up the set with "Tiny Vessels" and "Transatlanticism," the buildup of the latter serving as the show's high point and lone moment when the band, the song, and the orchestra all came together to create an incredible and notably cathartic moment. 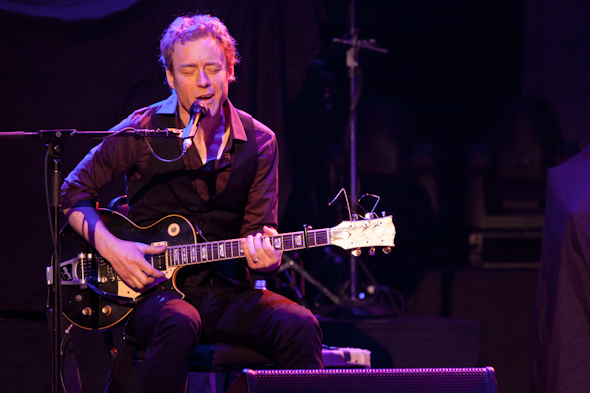 The real stars of the night, however, were the openers, Low. Hailing from the unlikely musical centre of Duluth, MN, the band have been honing and refining their minimalist folk-rock for almost 20 years now. Any sort of genre labeling, though, is a misnomer when it comes to this three-piece. Their dramatically slow songs have lead some to group them under the banner of 'slowcore,' although this is a reductive attempt at defining the indefinable ghostly quality of their music.

Husband-and-wife Alan Sparhawk and Mimi Parker, as well as bassist/keyboardist Steve Garrington, kept a criminally small crowd entranced as they sifted through their extensive back catalog, paying particular attention to last year's relatively accessible C'mon with the Parker-led "Especially Me" and the somber "Nightingale." 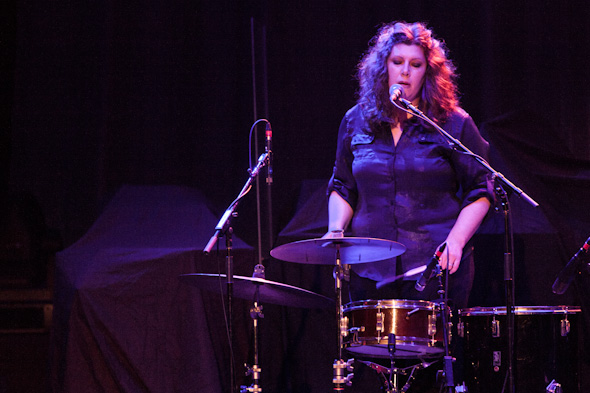 It was on some of the group's earliest tracks, such as the repetitious, haunting "Words," the first song off their debut album I Could Live in Hope, that their austere sound paired best with the acoustic and aesthetic perfection of the legendary Massey Hall. New songs "Waiting" and "Sunset" also fared well to an audience that seemed respectful but largely unfamiliar with their material. 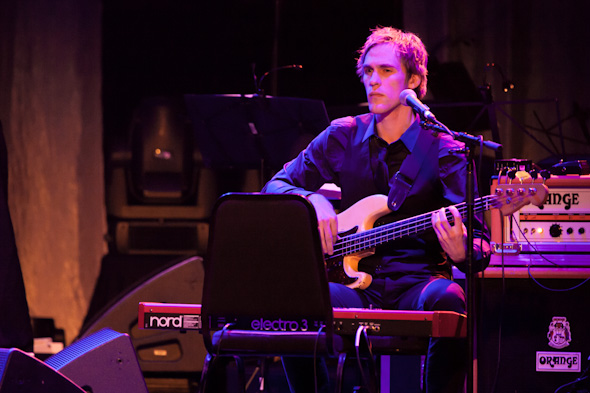 Despite coming in at the average length of an opener's set at 40 minutes, it was unfortunate to see the band get cut off so early. While Death Cab may have their stadium-ready sound well-honed, they were unable to live up to the openers and the more intimate environs at Massey Hall. 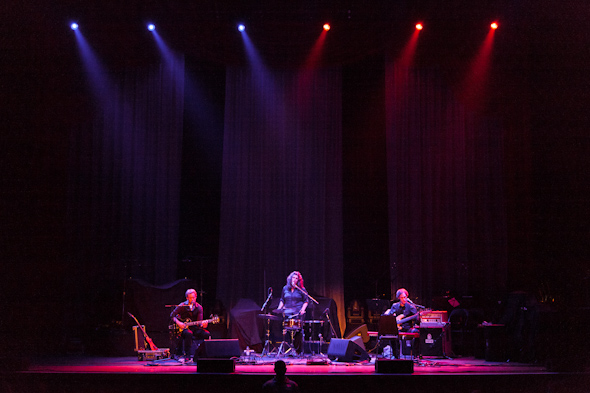